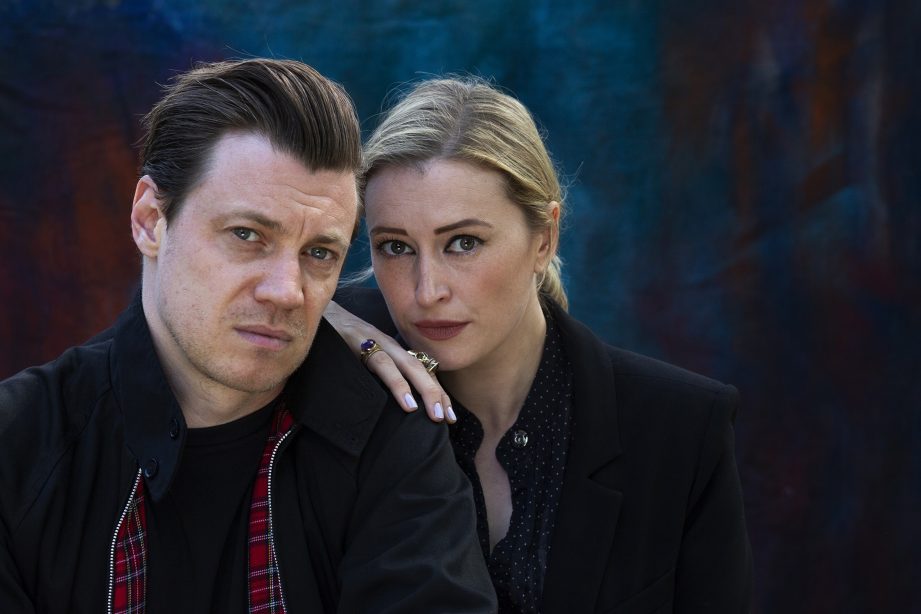 Couples don’t get more folk-rock than The Rails. On one side of the hyphen you have Kami Thompson, whose parents are Richard and Linda, one of the most famous couples on the British folk scene in the 1970s. On the other, you have James Walbourne, who has been guitarist to rock ‘n’ rollers from Jerry Lee Lewis to Shane McGowan to Chrissie Hynde. They have been playing together ever since first becoming an item, and the now-married couple brought out their first album, Fair Warning, in 2014. Now Cancel the Sun, their new record, is showing their fans exactly who they are.

BGS: Your latest album couldn’t be more different from your first. That one was stripped back, bare, traditional — this one’s absolutely rocking out! What’s behind the evolution in your sound?

Kami Thompson: With Fair Warning we set out to make a folk record within certain parameters, because we really liked the ‘70s folk sound. We were writing to that, and using traditional songs…

James Walbourne: My rock ’n’ roll background and Kami’s folk backgrounds have melded together on this one. All our influences came together and this time we weren’t trying to be anything — it was just a true representation of what we are.

Kami: I think of it as us at our noisy best, playing the music we like to listen to.

So what kind of music do you listen to together?

Kami: Well, we don’t listen together. We’ve got quite different tastes. But we both grew up with the same music around us as teenagers, that inescapable ‘90s alt rock and Americana and Britpop. I listen to mainstream pop — PJ Harvey and Elliott Smith were my faves growing up. James is more the tastemakers’ tastemaker…

James: I don’t know why she keeps saying that! I was just a music fanatic really.

Kami: His dad took him to see Link Wray when he was, like, 8.

James: He’d take me to see everyone from Frank Sinatra to Johnny Cash and Miles Davis and Jerry Lee Lewis. That was the biggest influence for me, and his huge record collection. My big hero was Elvis and that’s who I wanted to be. Who doesn’t? So I never thought about doing anything else but be a musician. And now I’m screwed because I can’t…

Kami, your biological parents are Richard and Linda Thompson – were you always destined to express yourself musically?

Kami: My father left my mother when she was pregnant with me, and they didn’t speak to each other until I was much older. So I was raised by my mum and a fantastic stepfather and our house was actually music-free. I would go to festivals with my father when I saw him on holidays and on the odd weekend. That was where I experienced live music, but it was the ‘80s and folk was so uncool to me then. My stepfather is an old-school Hollywood agent from Beverly Hills who used to represent Peter O’Toole and Omar Sharif and Richard Harris, so as a kid I went to film sets and I thought that was the coolest part of show business.

Talking of cool… James, you’ve played with Jerry Lee Lewis, The Pogues, and you’re currently Chrissie Hynde’s lead guitarist in the Pretenders. Which of those gigs has been the wildest ride?

They were all wild in their different ways. The Pogues was probably the wildest because you never knew what was going to happen, ever. But I feel very lucky to have been able to play with all these legends.

And the pair of you owe a debt to novelist and music critic Nick Hornby, for introducing you…

Kami: We have to make sure we send him our records whenever one comes out as due deference!

Did you feel any nervousness about making music together?

Kami: Not really. When we were in the early days of going out we’d drink too much and get our guitars out and noodle. It just seemed an obvious thing to do. We were both looking for a creative partner as well as a romantic partner so those two fell into place simultaneously really well.

James, you previously had a band with your brother – who’s it easier working with, a brother or a wife?

That’s a good question! My brother lives in Connecticut but he’s visiting the UK right now so I’ve got to be careful… but it’s pretty similar. You learn what to say and what to leave out. When to shut your mouth, really. Being in a touring band is like that – it can be hard to not fight. We’ve come up with a solution for now, we have to separate the work from the relationship to a point. Otherwise it takes over. We did that with the songwriting as well… we had to figure out a way to make it work, we weren’t very good at it before.

Kami: The last record we made we weren’t getting on professionally and relationships were frayed. We had to find a different way to work this time and we thought and talked about it a lot. James quit drinking a year and a half ago which has had an incredibly beneficial effect on how we get on. We found a way of writing lyrics and tunes independently from each other, then hashing out what we had in properly delineated office hours.

Are you ever tempted to take holidays alone?

Kami: Oh god yes! We’re both difficult to live with, if we take a big step back and a truth pill. We have to work at finding time apart the way other couples have to put work into spend time together.

James: She just went to New Orleans only this year! And I’ve been away with the Pretenders a hell of a lot in the last three years, a couple of months at a time.

What about the mood of this album? There’s a common theme to a lot of your writing, a world weariness, a pessimism…

Kami: Yeah, we’re a right laugh to go to the pub with! James is more of a storyteller, more of a narrative writer, but I can have a dark view of things. It’s not my only view but my positive thoughts don’t always make for good music, it’s so hard to write a cheerful song that doesn’t sound trite. It’s easier to be grumpy.

James: The same things irritate us, I think. We have a kinship over the world’s irritating stuff! But our singing together, too, is telepathic now. We don’t even have to think about it, which makes things a lot easier.

And which of the songs on the album are you current favourites?

Kami: I love “Cancel the Sun” because it’s that tip towards the psychedelic rock and James’s wigged-out guitar solo at the end makes me really happy.

James: I think it hints towards a different direction, a bit chamber pop Beatles. It points to more possibilities down the road. The other song I really like is “Ball and Chain” because it was one that came straight down from the heavens. It was very quick to write and to finish, and that’s always a good feeling.