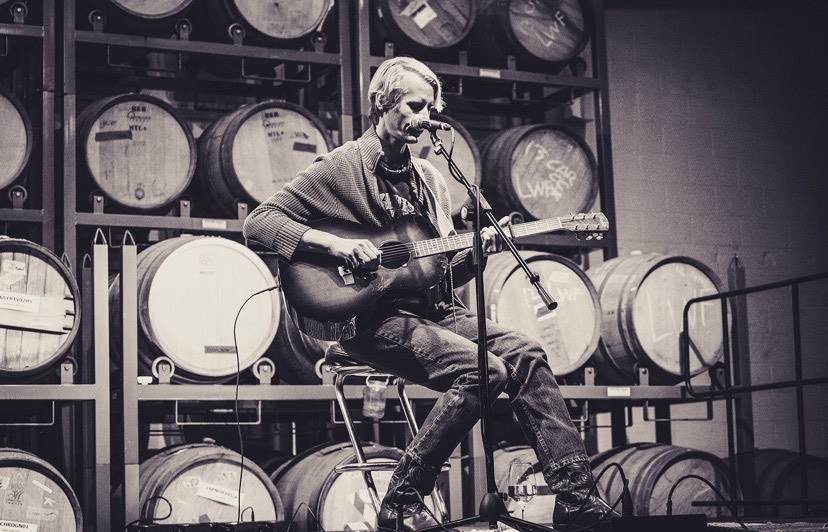 The impact and legacy of the Carter Family is a story that has been told many times, but we gain a new viewpoint from the mouth of a seasoned troubadour like Tom Brosseau. After decades of defining himself as one of this generation’s most insightful songwriters, Brosseau now takes a moment to pay homage to the Carter Family with his latest album, In the Shadow of the Hill: Songs from the Carter Family Catalogue, Vol. 1.

Volume 1 was recorded and produced by Sean Watkins with guest appearances from Dominique Arciero, Tristan Clarridge, and Sara Watkins. It features themes of love, loss, jealousy, and joy alike. An email interview with Brosseau uncovered from where this album sprouted, how the Carters influenced his own songwriting, and more.

BGS: Describe the experience of making this album. What are some things that stuck out to you as particularly memorable, challenging, or rewarding?

TB: In the Shadow of the Hill came about over a period of years. I don’t really know when it all started for me, but it’s in my blood now. When I was first beginning in music one of the songs I learned was “Wildwood Flower.” I copied the lyrics out by listening to the original recording: “Pale and the leader and eyes look like blue.” I must’ve listened to “Wildwood Flower” a hundred times over and over again, wondering if I’d gotten that line correct. Years later I discovered Wayne Erbsen’s book, [Rural Roots of Bluegrass Music] and while Erbsen lays out the origin of “Wildwood Flower,” I still wondered what it’s all about.

The process was the same with In the Shadow of the Hill as it was with the other albums Sean and I recorded; Grass Punks in 2014, North Dakota Impressions in 2016. I bring the bones of the song, Sean gives it form.

What role has the Carter Family played in influencing your own songwriting?

Carter Family songs never go beyond three minutes in length. While 10″ and 12” discs at 78 RPM (the recording medium of the day) only allowed for three to three-and-a-half minutes, what more could the Carter Family express if given extra time? Anyone who studies 78 music will learn about the art of brevity.

How did you prepare for the making of this album? Was research involved, and if so, what are some things you learned?

In the Shadow of the Hill came about because just enough time had gone by. Like how kernels of corn pop after sitting a little while in a hot, oily kettle. One day I woke and felt like I was part of the Carter Family. I read a number of biographies. Some were good. Ed Kahn’s liner notes to On Border Radio. Sara Watkins gave me a copy of Will You Miss Me When I’m Gone? and said, “Here, read this!” My favorite is Janette Carter’s Living With Memories. Castor oil solves a lot of problems.

Lou Curtiss, a musicologist and record-store owner in San Diego who died in 2018, had a rare tape of when he visited Sara Carter in Angels Camp, California, in the 1960s. Mostly it was her second husband doing all the talking, Coy Bayes, but it was still fun to hear since Sara Carter’s voice lords equally in tone during conversation as in song. What was it like to have been rocked to sleep by a mother with a voice like that?

Is there any song on this album that particularly resonates with you?

Sean and I recorded several songs not included on In the Shadow of the Hill. “While The Band Is Playin’ Dixie” is one of them. There’s a verse in that song that I often think about: “They found within his pocket a blood-stained little note/ A bullet hole had pierced it through and through/ It began with ‘Darling Mary, if I don’t come back again/ Just remember that my last thoughts were of you.’” People can just be so thoughtful sometimes.

Learning Carter Family songs is one of my passions. Eighty out of three hundred I know by heart. There’s a lot of repetition within the catalogue. The songs are three minutes in length. There’s three chords. There’s a lot about love, loss, heartache, death. I’ve picked up a few extra little shimmers of sentiments, though. One is about when nature smiles upon you, a feeling that we are not alone in this world envelops us. What a comfort that is.

A college professor of mine, a writer, once told me that his hope was that his book would make it into the public library. I think we all wonder who’s going to remember us when we’re gone. I’m among the many who carry the flame of folk music. My hope is to light a few candles along the way.