Tommy Emmanuel: Swinging for the Fences 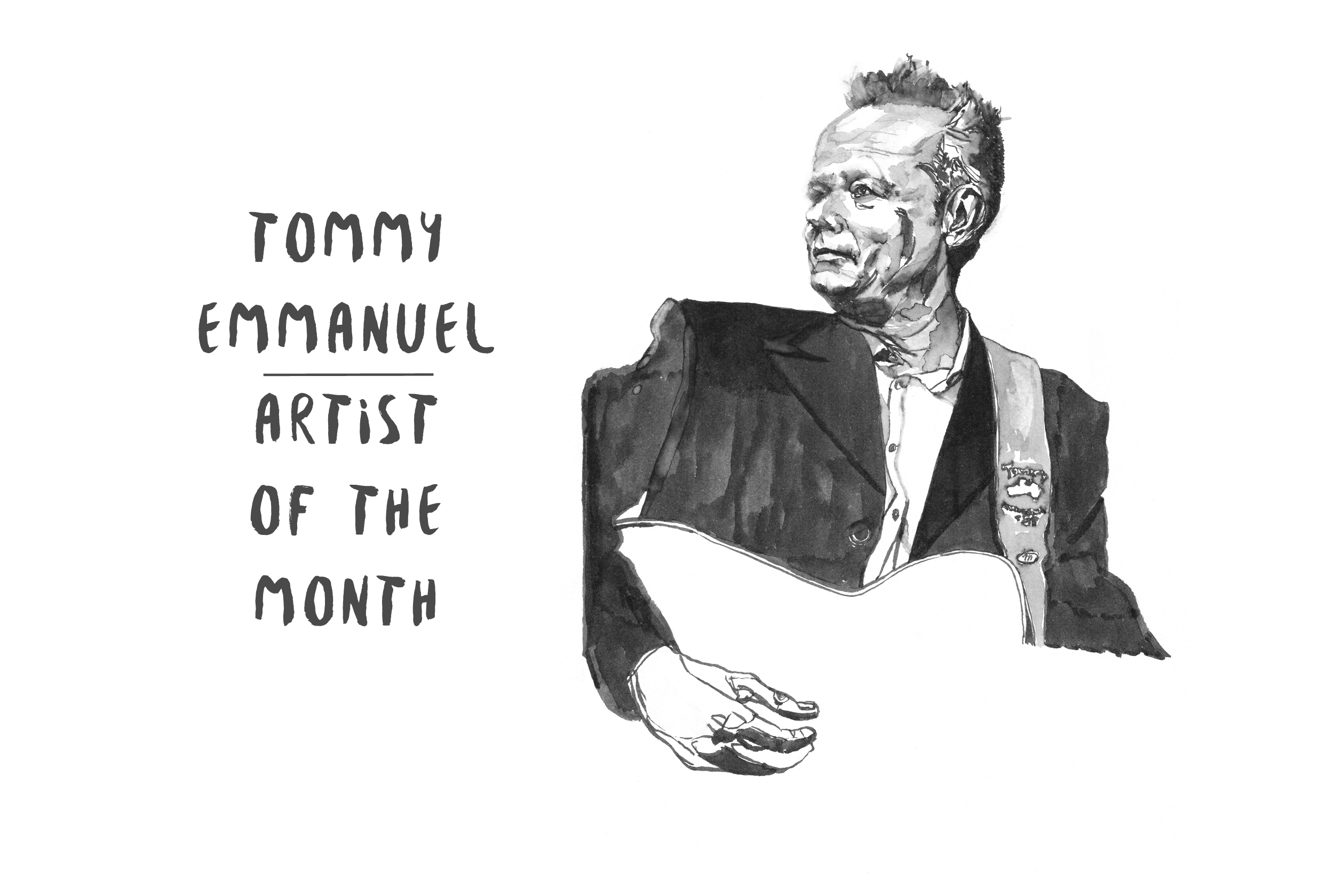 There’s a moment at the beginning of “Saturday Night Shuffle” — one of 16 duets from Tommy Emmanuel’s new album, Accomplice One — where the song’s guest, Jorma Kaukonen, turns to his host and says, “You’re a badass cat, man.”

It’s a nod of approval from one guitar great to another. Accomplice One is filled with those unplanned exchanges: a shout of encouragement here, a surprised laugh there. Raw and real-sounding, the album feels like a jam session between friends, mixing off-the-cuff solos and first-take performances with the virtuosity of an instrumentalist who’s been doing this for a long, long time.

Emmanuel began touring more than a half-century ago, hitting the Australian circuit as the youngest member of a family band. Now 62 years old, he still plays 300 shows a year. He doesn’t use a pick. He doesn’t use a regular amp. In a world whose most well-known guitarists — Eric Clapton, Jimmy Page, Chuck Berry, and the like — inevitably tend to be electric players, Emmanuel has remained true to the acoustic guitar. He’s the king of the unplugged.

With appearances from 20 guests, Accomplice One shows just how far the king’s empire extends. Americana poster boy Jason Isbell joins Emmanuel on the album’s opening track, a soulful reimagining of Doc Watson’s “Deep River Blues.” Bluegrass heavyweight Jerry Douglas stops by to swap solos on Jimi Hendrix’s “Purple Haze.” Mark Knopfler, Ricky Skaggs, and Rodney Crowell all make their own cameos, too. Recorded in studios across the world, these songs nod to the core ingredients of American roots music — Emmanuel’s bread and butter — without losing their global perspective.

“I grew up with music that came out of America more than the music that came out of Australia,” says Emmanuel, who was raised in New South Wales. “It was a combination of sounds that were coming out of Nashville, Detroit, Chicago, Kansas City, and New Orleans. I love all kinds of music, but that’s still the stuff that really touches my soul.”

Those childhood influences resurface on Accomplice One. “Saturday Night Shuffle” flips the Western twang of Merle Travis’s original on its head, sounding instead like the funky work of a New Orleans jazz band. Madonna’s dance-pop hit, “Borderline,” is turned into a lilting folksong with help from Amanda Shires. Emmanuel trades country licks with banjo phenom Charlie Cushman and blues-rock guitarist J.D. Simo on “Wheelin’ & Dealin’,” then bounces between Celtic shuffles and barn-burning bluegrass on his Clive Carroll collaboration, “Keepin’ It Real.”

It’s during “Djangology,” though, that the album truly goes international, with Emmanuel and his guests looking far beyond the Lower 48 for inspiration. A tribute to Django Reinhardt’s laid-back, jazzy phrasing, the song was recorded alongside Frank Vignola and Vinny Ranioloa in Cuba, during the middle of the country’s first-ever guitar camp.

“I was teaching 120 international students — everyone from 18 years to 80 years — for four days, and playing shows at night,” Emmanuel remembers. “One of the days, we went to the studio where they recorded Buena Vista Social Club. All the original microphones were there. We brought in some plastic chairs, and all the students sat in the main orchestral room. We had mics set up in front of us, and we worked out the arrangement in front of the kids. Then we recorded it twice and played it back, so they could hear it. The second take was the best, so that was the one we kept. It was very simple.”

Remember Santana’s Supernatural and its biggest hit, “Smooth,” which paired the guitar legend with Matchbox 20’s Rob Thomas? That song was inescapable for years, but it never truly sounded believable. Did anyone actually think Santana and Rob Thomas hung out together? Could anyone imagine them co-leading a guitar camp in Cuba?

That’s what makes Accomplice One so compelling: It’s believable. There’s fret noise on these tracks. There’s studio chatter between the musicians, all of whom are fans of one another. During the Cuban recording, you can hear someone tapping a foot on the studio floor, unable to resist keeping time with the music. The imperfections that would’ve been bulldozed by Supernatural‘s high-gloss production are, instead, put on a pedestal and celebrated by Emmanuel, whose album emphasizes feeling and intention over perfection.

That said, there’s a good bit of perfection here, as well. Emmanuel attributes his refined playing to a lifelong Chet Atkins obsession, which brought him face-to-face with — and eventually under the wing of — his idol during Atkins’ later years.

“Chet lived a life with a lot of great experience,” says Emmanuel, who became friends with the guitarist in 1980. “He had a lot of great people around him. He didn’t just make great music; he made the people around him great, too. He taught me a lot, not just about music, but about human nature. That’s the stuff I can write about.”

Nearly two decades before they met in Nashville, Emmanuel first head Atkins on the radio in 1963.

“It was a sound that I knew, deep in my soul, was what I wanted to make,” he remembers. “I wanted to sound like that. I just wanted to be like that. I think it’s nature’s way that all of us start out emulating somebody.”

If Emmanuel’s approach to the guitar began as emulation, it’s since grown into something signature. Like a one-man band, he’s learned to simultaneously pluck out a song’s melody, underscore it with a walking bass line and beef up the mix with accompanying chords. Listening to “Deep River Blues,” it’s easy to assume that Emmanuel and Isbell are tag-teaming the song’s guitar duties, filling its verses with blue notes and densely stacked chords. But that’s Emmanuel playing alone, with Isbell opting to leave his guitar in the case and, instead, channel his inner soul singer.

“When Jason started to sing that song, you’ve gotta imagine the chicken skin I got,” says Emmanuel, happy to refocus the spotlight on Isbell’s voice rather than his own playing. “I was doing the thumb-picking Doc Watson part and, when you add his voice to mix, it’s totally a soulful experience. It’s real, and that’s what I love about playing music.”

The feeling appears to be mutual. Accomplice One is filled with the sympathetic interplay of musicians who want to be there and that’s what elevates it above the usual catalog of guitar-heavy duets. Filled with covers, originals, (“Rachel’s Lullaby,” a Beatles-inspired song written for Emmanuel’s baby daughter, is one of his most compelling compositions in years.) and top-shelf playing, the album is for guitar nerds and casual Americana fans, alike. It’s the sound of a roots music lifer who, a half-century into the game, is still swinging for the fences.