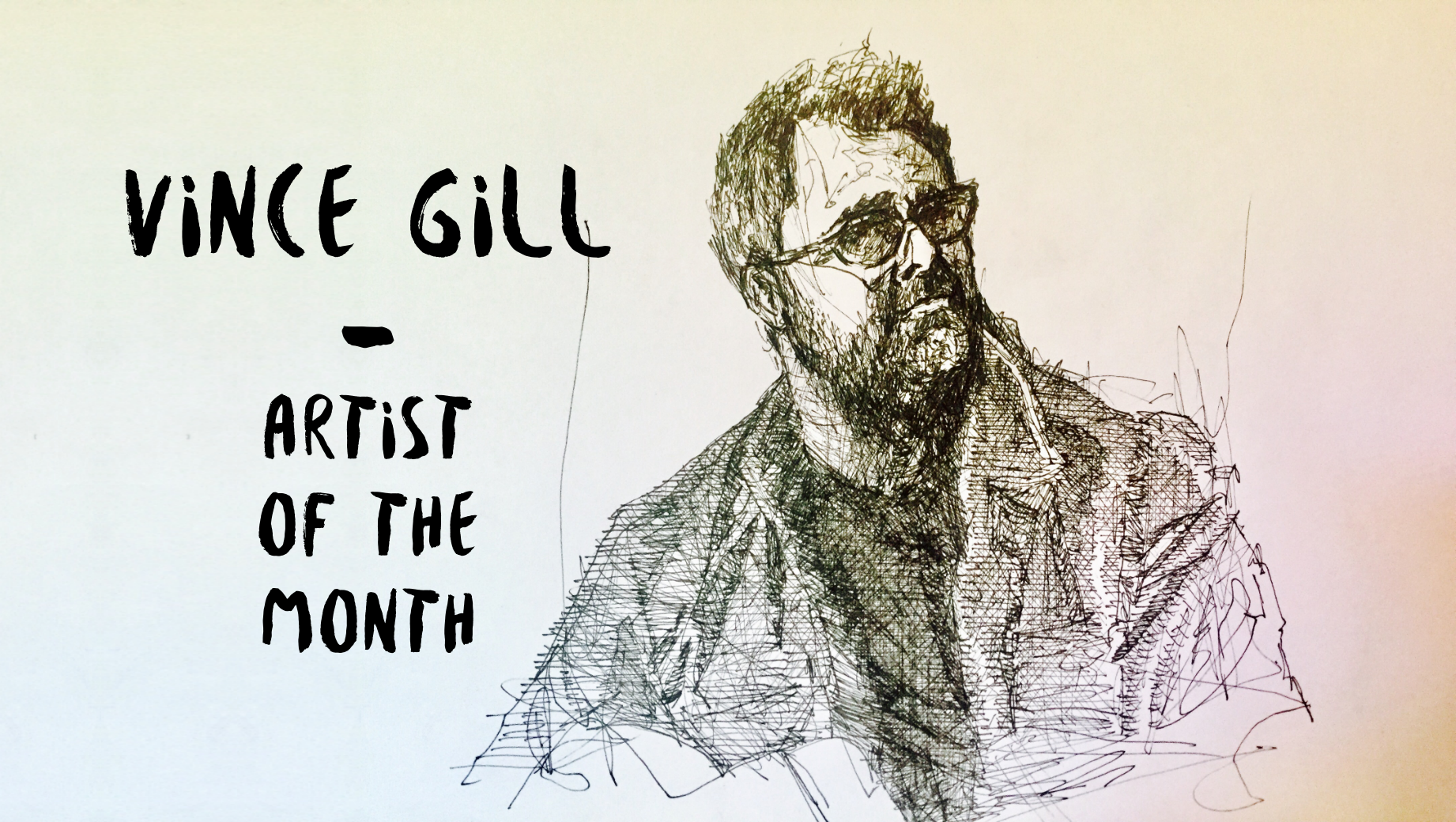 In the second half of our interview with Vince Gill, the country legend reflects on his bluegrass history, explaining how he became interested in the music, what he learned by listening closer, and why it led to one of his most famous songs.

Editor’s Note: Read the first part of our Artist of the Month interview with Vince Gill.

BGS: “Go Rest High on That Mountain,” in my opinion, is going to live forever. And I think the bluegrass audience loves hearing Patty Loveless and Ricky Skaggs sing with you, too.

Gill: You know, I wouldn’t have been able to write that song if I hadn’t played bluegrass music and learned the structure of that music and how it works — and the emotion of it. Bluegrass music is so honest and so real. Some of those morbid murder ballads and the saddest of the sad songs are what I love most. Give me “Mother’s not dead. She’s only a-sleepin’. Patiently waiting for Jesus to come.” That’s about as good as it gets. “The Little Girl and the Dreadful Snake.” I could just go on and on and on.

All these tortured songs, but you know they’re real life. They’re not somebody going, “How can I slip one up on the world and make a bunch of money having a big hit record?” They’re so honest and real. And the fact that my past had so much to do with Ricky and Patty, they were the only two people that I would’ve consider it singing on that song.

I still love it when Patty comes to do the Opry.

Tell me about how you found bluegrass. Was there an entry point for you?

Yeah, I knew of it because my dad played the banjo a little bit. He never could figure out the three-finger, Scruggs-style banjo. He cussed Earl his whole life because he couldn’t figure it out. He played more of a folky banjo. Not drop thumb, not old-timey, but more of a frailing kind of banjo. So I was always around the music, as best I can remember, forever. There were obviously the Flatt & Scruggs things from The Beverly Hillbillies that were in everybody’s DNA. Then I was playing mostly in rock bands in junior high school and high school.

A kid named Bobby Clark was the one that really got me pointed towards bluegrass. He had a little band in Oklahoma City and his father was a repairman. I had broken the string on my dad’s banjo, messing around with it, and I didn’t know how to change it. So I took it to Charlie and he put a string on it pretty quickly and everything was fine. I wasn’t gonna get my butt kicked. Then I started talking to Charlie, and he says, “You play music, don’t you?” And I said, “Yeah, I love to play. I play electric guitar and play in rock bands and stuff.” He goes, “My son Bobby is a really fine mandolin player and plays bluegrass. You ever played any bluegrass?” I said, “No.”

They stuck an acoustic guitar in my hands and Bobby said, “We just had our lead singer leave the band and we’re looking for a singer.” So they did a pretty good job of raising me and teaching me and showing me how bluegrass worked. I played in their band for the last couple of years of high school. Then in another bluegrassy kind of band called Mountain Smoke. And I started playing all the festivals down around Oklahoma and Texas and Kansas. And ran into all the people that I’ve known in my whole life since I was 15, 16 years old.

Wasn’t that how you met Cheryl White [from The Whites]?

Yeah, I used to carry her bass around the festivals. I always had a thing for the girl bass players for some reason. There was another family band from Missouri called the Calton Family. Got sweet on Brenda. Then I got sweet on Cheryl. And she says I should’ve picked a harmonica player. [Laughs]

Those were such fun days and innocent. I loved the camaraderie that went on in that music. Not only with the people that came to the festivals, but the musicians. Everybody jammed together. There wasn’t a whole lot in it for anybody. Everybody was just kind of getting by. It was amazing, as I look back, what it did for me in the way that I respected other musicians and listened to other musicians. It was really important that I had a lot of that in my past. I haven’t forgotten it.

When I first heard bluegrass, I was just blown away by musicianship of it.

Yeah, I mean Stuart Duncan was as great as he was at 12 or 13. So was Mark O’Connor when he was 12 or 13. And Marty and Ricky and Jerry and on and on and on and on of these wonder kid pickers. Unbelievable. I kind of squeaked in because I could sing a little bit and figured out how play as I went. I kind of played whatever was left over in a lot of the bands I was in, and that was fine.

I saw you play mandolin on quite a few songs when you played Bluegrass Nights at the Ryman. What is it about that instrument that you really enjoy?

I think the mandolin is the most important drive of a bluegrass band. The banjo and that are the two most definitive sounds. In bluegrass, mandolin players are like the drummer, even more so than the guitar player to me. It’s that backbeat and driving it. Sam Bush was a great teacher of how you drive that music, you know? I loved the ferocity and intensity that he played with. When he played, that was powerful to watch as a 15- or 16-year-old kid.

That’s what I like. I like making it dance. I liked the importance of playing that instrument in bluegrass. I’m probably a much better guitar player in bluegrass than I am a mandolin player. But in some bands I had to play banjo. Sometimes I had to play, unfortunately, fiddle on a few things. Terrible! I played Dobro, I played everything. I played bass with Ricky’s band for a minute and then got to play some other instruments, but had a love for all of it. I still do. Probably I love it more now because it reminds me so much of my early days, and those first forays into learning about playing music.

Did Dobro come naturally to you?

It all kind of did. I mean, I put in the hours and I practiced hard. The neat thing was, you had such good people to learn from. I always had big ears and could always hear well and find what I was hearing in my head, figuring out how to play it.

There are so many brother duos that came up in bluegrass. Do you think that rubbed off on you with your harmony singing now?

Absolutely, yeah. I was trying to either be Ralph Stanley or Phil Everly or Ira Louvin or whoever. Don Rich and Buck Owens should’ve been brothers. I was a high singer so bluegrass was a natural fit. There have always been predominant high singers that were the focal point. Whether it was Ralph and Carter or whoever, man, that was a blend. You didn’t understand it when you were 15 or 16, what it was that made that blend so beautiful. It was the blood, you know. The DNA was the same.

I didn’t get to experience that until my oldest daughter was 18, 20 years old and we started singing together. I started calling her my little Everly because I’d spent my whole life trying to be Phil. You know, singing the high parts for everybody else, and blend perfectly, and every nuance they did, I’d do. And I’d just want ‘em to think I was related to ‘em. She wound up naming her daughter Everly because of that, because I called her my little Everly.

But yeah, I love sharing music. I love the collaboration of music more so than I like it by myself. It’s not as interesting by yourself, but when you get to play off somebody, and play with somebody, it’s very powerful.