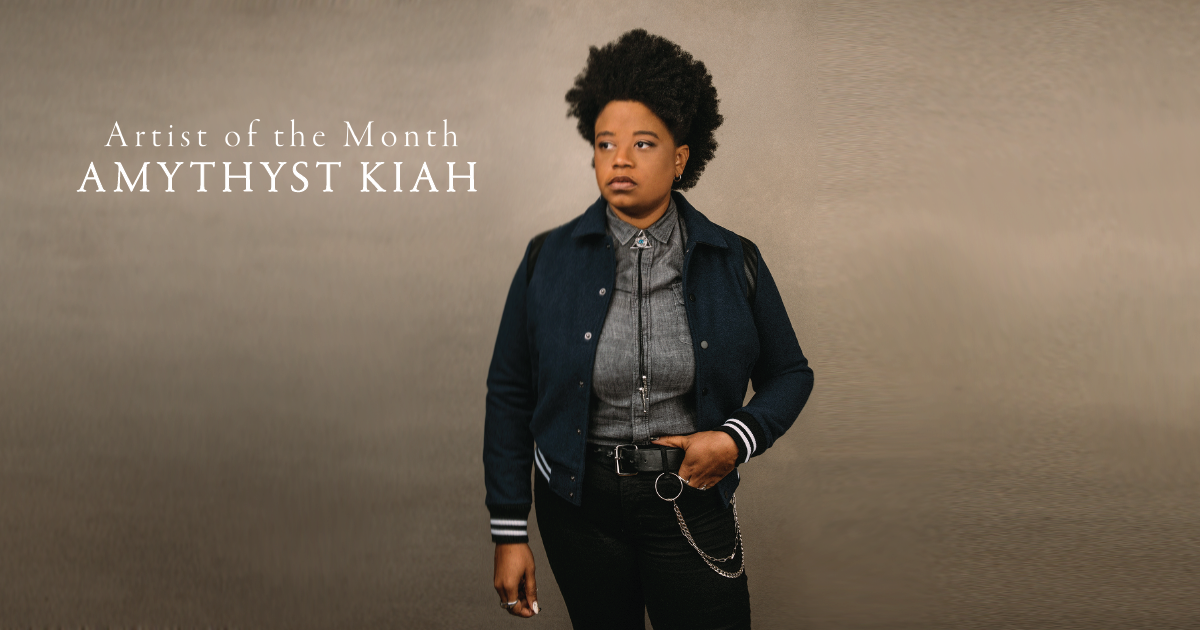 When Amythyst Kiah was a teenager in the suburbs of Chattanooga, Tennessee, she wanted to be “the guitar-playing version of Tori Amos.” Locked away in her room with her headphones pulled over her ears, poring over liner notes and listening intently for every nuance in her favorite records, she found solace in the way Amos told her darkest secrets in her songs and how she turned that vulnerability into something like a superpower. It made her feel less alone, especially as a young, closeted Black girl in a largely white suburb. Tori Amos helped her survive adolescence.

Kiah didn’t grow up to become any version of her hero. Instead, she simply became herself. Her new solo album, Wary + Strange, ingeniously mixes blues and folk with alternative and indie rock, devising a vivid palette to soundtrack her own songs that tell dark secrets. It’s one of the most bracing albums of the year, grappling with matters both personal (her mother’s suicide) and public (the struggles of Black Americans). “Now, when I’m in my mid-thirties,” says Kiah, “it’s amazing to make a vulnerable record and then have people at my shows tell me that my music helped them heal, helped them get through some hard times. To have someone connect with my music is really powerful.”

Editor’s Note: Read the first half of our BGS Artist of the Month interview with Amythyst Kiah here.

BGS: These songs are rooted in your own life and your own experiences, but they do seem like there is something universally relatable in them. Is that something you were thinking about or striving for?

Kiah: Yeah. To have someone connect with my music is really powerful. But that’s been hard to process that idea, because for the longest time I had so much social anxiety and depression and low self-esteem. I didn’t think that much of myself and couldn’t imagine that anybody really cared about me. It’s all stuff related to mental health. Obviously there are people who cared about me. I just couldn’t see it. Now, I’ve come around and maybe fully grasped my value as a person and what I have to offer the world, and that has been very reaffirming. I have a better sense of who I am and why I’m here. And it feels good to make music that helps people get through hard times.

What is it like to revisit the tough times in these songs night after night?

I’ve spent some time thinking about that, and I don’t really know how I’m doing it, to be perfectly honest. A big part of it is that I spent a really long time repressing my emotions and keeping my feelings to myself. So writing a song about how I’m feeling is a sign that I’ve processed it. Not that I’m moving on or I’m done with it, whatever I might be writing about. But I’ve confronted it. I’ve learned from it. And now I can continue with my life and move forward.

A big part of my life has been living in the past and not being fully present in the moment. In order to be present, you have to be able to process stuff that’s happening to you in that moment. Otherwise, you make decisions based on something that happened before. So, a song is a representation of me processing something and understanding what happened to me. Singing that song night after night, it doesn’t feel like I’m necessarily reliving it every time. Because I’ve already processed it. That’s my working theory right now. It might change.

That’s something I think about a lot, because as a listener I can play a song based on the mood I’m in. But as an artist, you’re locked into these songs. You can’t not play them.

I get what you’re saying. The way people listen to music is really fascinating to me. My partner and I, we approach music very differently. My approach has always been to listen to things that reflect my mood. When I was younger, that meant listening to a lot of really sad, depressing songs. Somehow that made me feel good. I’m a very critical listener of music and I like to listen to all the different intricacies. I’m not someone who has a vast library of music, but I’m obsessed with certain sounds and ideas so I will listen to an album and pick apart every detail.

But my partner listens to music to shut her brain off. Her favorite artists are very different from mine. She loves a lot of pop music, like Taylor Swift. To her it’s feel-good music. You break it out and sing along. But she also listens to a lot of classical music, too. She’s got that ability to go back and forth with her listening vibe. That was surprising to me at first, because I used think, “How can people listen to happy music? Don’t they know what’s happening in the world?” I would deliberately avoid happy music because I was personally insulted by it. But thanks to my partner, I can totally see that perspective where you’re listening to music that doesn’t reflect the mood you’re in because you’re trying to snap out of it.

Did that change how you listened to music?

Some lines in these songs sound very defiant of religion — like in “Black Myself,” when you sing, “Your precious God ain’t gonna bless me.” Can you talk about that aspect of your songwriting?

With “Black Myself,” the idea was that each verse would be from the perspective of a specific type of person. So the first verse with that line is from the perspective of an enslaved person. They’re singing about wanting to jump the fence, wanting to be free, wanting to be with the one they love. If an enslaved person had a relationship or a marriage, it was never legally recognized. There was always a chance that they might get sold to different people and they’d never see each other again. Whatever bonds they had could be broken, like they were just cattle. The line about “Your precious God ain’t gonna bless me,” that’s a direct reference to the way that pro-slavery people used Christianity as a way to justify enslaving people.

There was a Bible specifically written for enslaved people — it was even called the Slave Bible — and the people who edited it made sure to only leave in the verses that talk about being obedient. All the verses that talk about autonomy and freedom were removed. The sole purpose was to get enslaved people to be content being slaves, so they wouldn’t revolt. But they were basically saying, “God wants you to be enslaved. He wants you to serve your master. He wants you to be treated like a subhuman.” That is not a God that I would ever want to believe in or ascribe to. That line is that character saying that’s wrong.

I’ve had one or two instances where someone got upset at that line, because they felt like I was being disrespectful to God without really understanding the context in which it’s being said. But I don’t agree with that. There are people all over the world with different belief systems, and at the end of the day, if what you believe in makes you a better person and makes you have respect for humanity, that’s wonderful. If you believe in humanity, that’s what important to me. But why would God be OK with telling someone they have no freedom? But any time you make art, there’s always going to be people who see one thing but not everything else surrounding it. And they base an opinion on that. Not everybody’s going to understand the whole picture.

I read about your performances in Europe, where the crowd would sing “Black Myself” back to you. It definitely seems to reinforce that idea of having a conversation with the song.

I was at the Cambridge Folk Festival with Rhiannon [Giddens], Yola, and Kaïa Kater. We put together a set where we’re singing our own songs and then singing harmonies for everybody else’s. There had to be 500 or 600 English white people in this tent, and it was the first time I’d really noticed other people singing the song or singing that line, “I’m black myself.” I remember thinking, “What planet are we on?” One of my biggest reservations about that song was that people would hear it and think, “Oh, that’s just for black people.” But to me, when someone’s telling a story, it’s meant for everyone to hear. Systemic racism is something that affects everybody in different ways, so we all need to be part of the conversation if we’re going to make things better and look out for each other.

Did you get any other negative responses to the song?

My big concern was that there would be some backlash from white people who weren’t really listening to the song or thinking about it. I was afraid they’d try to make a point like, “If this was called ‘White Myself,’ you’d be canceled.” And there have actually been some comments like that, which completely disregards the fact that the song is about Blacks. It’s about overcoming adversity despite being Black. So if someone can’t hear the words of the song and actually understand what’s happen, that says more about them than it does about me or the song. So I have no apologies for it.

But there are white people who understand what the song is about and they’re singing in solidarity. They know that it’s about human experience. And just because you didn’t personally experience some of this stuff doesn’t mean you’re not allowed to sing along with it. I had a similar conversation the other day with somebody about the song “Coal Miner’s Daughter” by Loretta Lynn. I’m not a coal miner’s daughter. I didn’t grow up in the coal mines. But I love that song and I love to sing that song. It’s a great song about someone else’s experiences. Empathy is such an important quality in that regard and we need allyship in order for things to get better.

Editor’s Note: Read the first half of our BGS Artist of the Month interview with Amythyst Kiah here.