Where Everything’s Connected: A Conversation with Penny and Sparrow 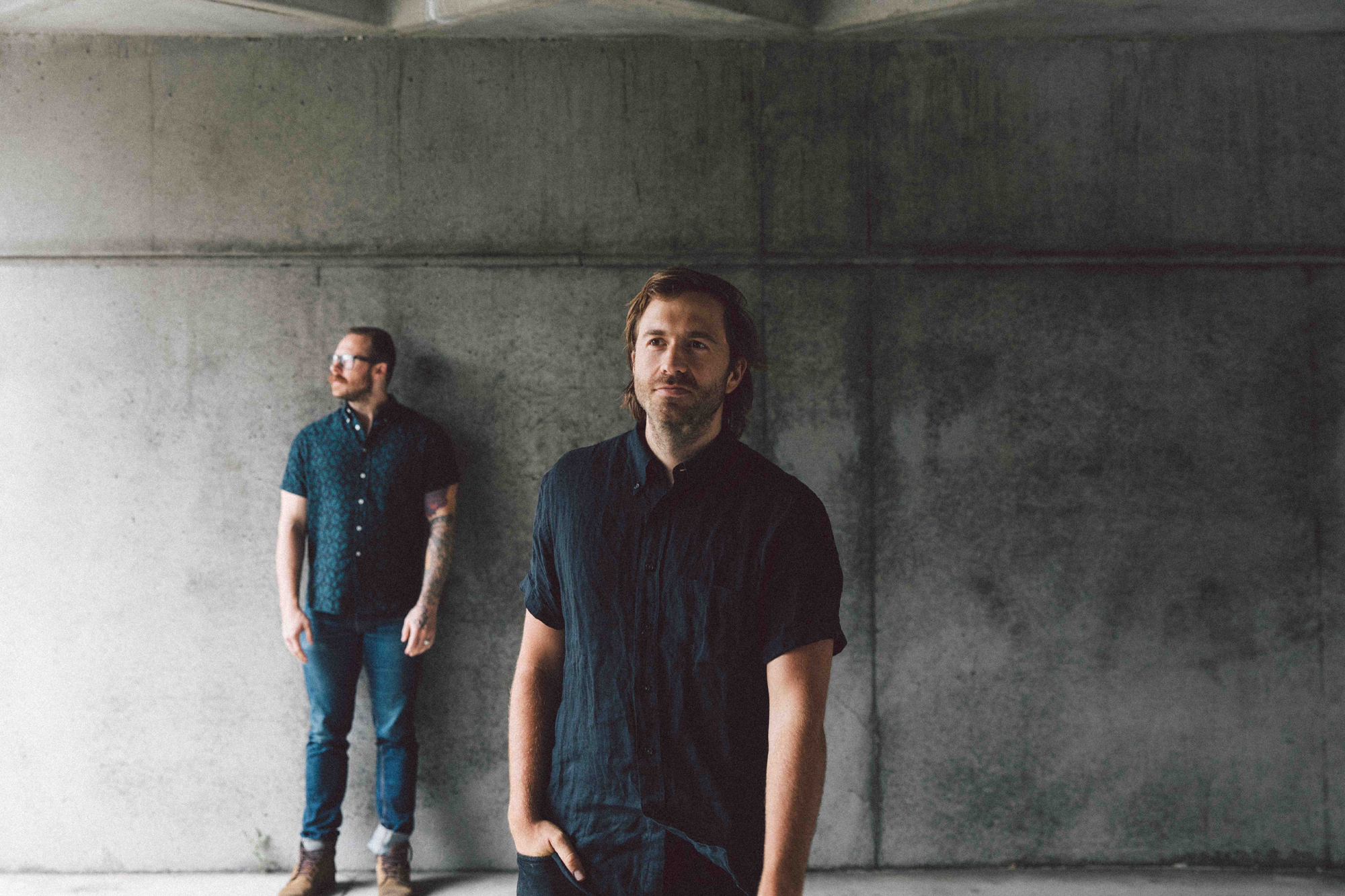 Sitting in a Philadelphia hotel room, Andy Baxter and Kyle Jahnke debate their options for lunch. The restaurant needs to be special, because the guys have reason to celebrate. The night before, Penny & Sparrow headlined World Café Live, a hip, roomy venue run by the city’s NPR affiliate. For a duo whose first Philly show — a bar gig somewhere out in Manayunk with seven people in attendance — was only three years ago, Penny & Sparrow have come a long way in a short time. Their rapid climb to headliner status is worthy of commemoration. At the very least, it’s worthy of a killer cheesesteak.

So you’re looking to grab some lunch. When you’re touring through a new town, is it important to eat and shop locally?

Andy Baxter: I look for similar things in most cities we visit — used book stores, comic stores, liquor stores. Those are the things I collect on the road. I have a few wells I always go back to in certain cities, too. I’m looking forward to Ann Arbor, because Vault of Midnight is my favorite comic store in the world.

Which aisle in the liquor store is your favorite?

Kyle Jahnke: We like bourbon. People bring us bourbon at our shows, too.

AB: We started collecting bourbon a few years ago. We usually get a bottle in the green room, and we’ll storehouse it for the entire tour. Then we do a draft at the end of every tour, where we each pick our favorite bottles and take them home. It’s awesome. I’m not gonna lie to you: I’ve replenished my bunker at home many times.

Where did that personal connection with your fans begin?

KJ: For whatever reason, the house show community builds a bed of coals for fans who will travel to come see you. There’s a connectivity there. It’s a really cool environment. We played a lot of those shows at the beginning, when venues weren’t ready to book us. We still play those shows on occasion.

Is that where you began introducing stage banter into your sets? These days, that’s a big part of your show.

AB: It probably started at the house shows, although adding it to our performances wasn’t a concerted thing. Since we want to engage with folks on and off stage, it feels normal to react with the crowd, regardless of how big it is. I love when people talk back. We feed off that interaction as much as we can.

Does the jokes ever fall flat?

KJ: The first time through town, it’s interesting for the crowd. Our songs are pretty weighty, and our banter is not. I think that throws people for a spin. Once they catch the overall pattern of the show, and they realize we’re trying to let people come up for air between heavy songs, they start reacting with us.

How many people are on the road with you these days?

KJ: We’ve got a tour manager who’s a good friend of ours, but we don’t have a front-of-house guy. Especially now that we’re playing bigger rooms, most of the sound guys are really great, and we only have a total of four inputs. It’s not a complex thing. We usually become best friends with the sound engineers, because we only have four channels. They like that.

AB: They’re like, “Oh, thank God. Vocals and an acoustic guitar? This is easy.”

Without drums or electric guitars, you can really hear the natural sound of every place you play, too.

KJ: Definitely. We’ve played all sorts of rooms on this tour. Some are built for acts like us. We show up and get to hear the natural reverb of the space we’re in. Sometimes, you’re playing these boxes that you need to orchestrate and synthetically make it sound the way it needs to. Each one is different.

Before you were headlining your own shows, would you ever find yourselves playing a show with a band that wasn’t nearly as nuanced or quiet as Penny & Sparrow?

KJ: At the beginning of our career, we’d play with local bands. Sometimes it would be in a metal venue, playing with metal bands. That was both bar jarring and very amazing. We got paired once with a world instruments band, too, and there were about 50 instruments onstage.

AB: There was a hammer dulcimer, a rain stick, and a didgeridoo. Like Kyle said, the best pairings are always the metal shows. You’ve got two different groups showing up, and they both tend to like it. We’re the palette cleanser for their group, maybe. We’re happy to be the sherbet for them. We’re just a homemade cucumber water.

Speaking of palette cleaners … are there any non-musical activities that help you clear the noise from your head and make room for new songwriting ideas?

AB: Reading. Just taking in a whole bunch of different voices from other wordsmiths. I love podcasts. I love The Moth. I love audiobooks and short stories. You’re learning different peoples’ word banks and vocabularies. And Kyle’s activity is probably baking.

KJ: No, mine is just being outside or doing non-music things.

What led to the creation of your newest album, Wendigo?

AB: We originally started writing this album, thinking we might do a musical of sorts. A dark-themed concert album like Redheaded Stranger, but all from the perspective of Death, like the grim reaper singing the songs. We started doing that and, at the end of the writing, some parts didn’t fit, so we began writing new songs that were inspired by fear. We wanted to figure out if stuff we’re scared of is actually worthy of that fright. I really like comic books and horror stories, so I’m familiar with ideas like the boogeyman and the Loch Ness monster. It’s like immersion therapy. Sometimes, when you a shine a light directly at something that frightens you, you can de-fang it.

We live in a scary world right now. Do you see any political parallels with your songs? Were you writing about the monsters who rule us?

AB: I won’t say that we don’t exist in a scary time right now — that would be really silly — but I’ll also admit that most of these lyrics were written long before the campaign trail was in full hatred mode. It would be disingenuous to say the album was, in any way, inspired by political ramifications. But looking at 2016 and 2017 through the lens of what we’d written was a really eerie thing. The album is all about looking at things that you’re scared of … and now we’re realizing all those things have been doused in gasoline and set on fire.

Your band is often compared to the Civil Wars. You worked with John Paul White on Penny & Sparrow’s previous album, which must’ve been inspiring.

KJ: We worked pretty closely with John, starting with the songwriting and moving on to everything else. We’d take him some songs we really loved, and he’d helped mold them. We co-wrote songs from the very beginning with him, too. He was producing it, and he helped us make every musical step along the way.

I see some similarities in the way Kyle and John Paul play the acoustic guitar, too. It’s a very specific thing, being the main instrumentalist in a folk duo.

KJ: He was a huge influence on the way I was playing guitar, every before I met him. Meeting him and learning techniques and seeing how he played, that just increased his influence. I love the rhythm he puts into a guitar. And before they stopped playing together, I spent a lot of time studying how he and Joy [Williams] interacted as a duo onstage, because it takes a lot for two people to fill a room with nothing else than a guitar and two voices.

Let’s get back to that whole “we wanted to write a musical” thing. Is that something you’ll continue pursuing?

AB: I loved musicals growing up, and I still love them now. Thanks to the Internet, I can now see a bootleg version of Hamilton. Years ago, if you couldn’t get to New York to see a Broadway show, you had to watch the Tonys. Kyle loves Broadway, too, and we both particularly love the narrative of Les Mis. Years ago, we started out writing songs from Valjean’s perspective, then we decided to have one thread that ties every record we do together, which is choosing a different character from that show and writing a song from their perspective. We’ll keep dong that until we run out of characters. We’ve dabbled in the idea of doing a musical for a long time now.

KJ: We love the idea of connecting a story and a song. One day, I’d love to go back to the idea and trying to do something similar to it, where everything’s connected and it has a central theme. We just love writing songs, period. We just really like our job. That’s what it comes down to.