With an Atmospheric New Album, Amos Lee Is Not Afraid to Dream 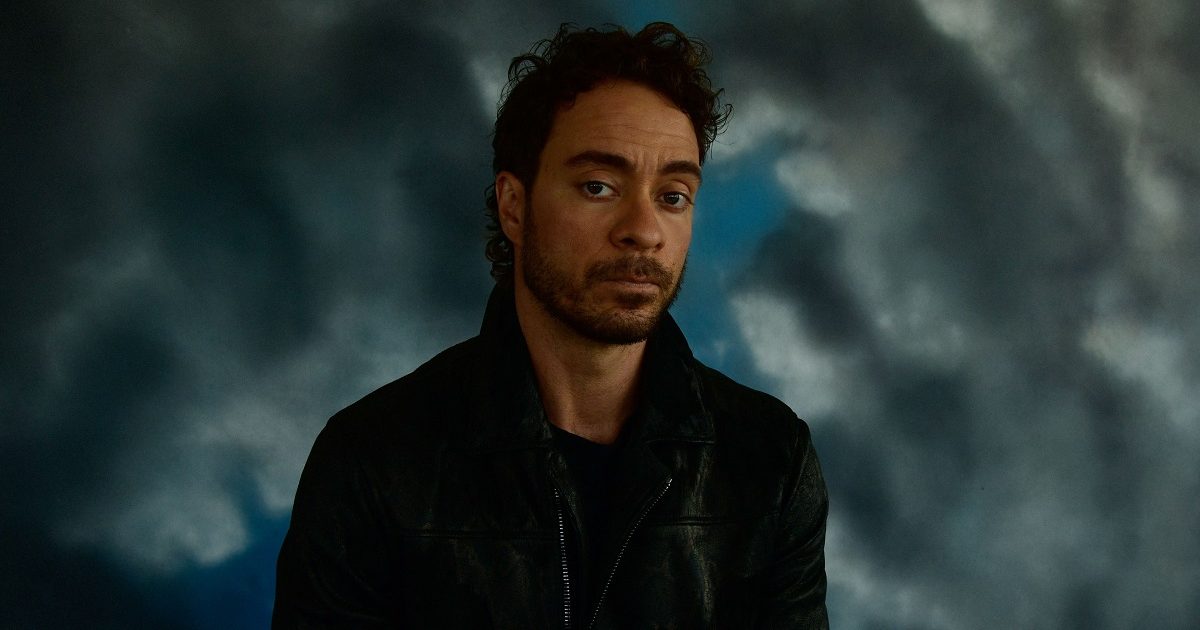 Amos Lee’s new album, Dreamland, is introspective, poetic, and sometimes a little hard to figure out, as such a title would suggest. It’s worth mentioning, though, that’s it’s not a sad record. Dialing back a solo-acoustic vibe for a few unexpected but effective sonic textures, it’s a departure from early staples like “Arms of a Woman” or mid-career catalog cuts like “Chill in the Air.” However, it still sounds just like an Amos Lee record.

Part of that is because of the rhythm of his singing, where he’s able to glide through bulky words (like “considerations”) without sounding forced. His multi-octave range also remains strong, an attribute that’s been drawing fans in with since his 2005 debut, after he gave up an elementary school teaching job for a troubadour’s life. Dreamland, his eighth studio album, carries on that dream.

BGS: Did you have a certain sound in mind as this album was taking shape?

Amos Lee: Sort of, not really. In the past I’ve had lots of different kind of recording experiences. I’ve done live-in-the-room stuff with the band. I’ve done solo acoustic-y kind of vibes. And this time, I wanted to do something that was a bit more in the box. And what I mean by that is, to work in a program like Ablelton or Logic and create a bit more… I don’t want to use the word modern because it always comes off like saying “new American cuisine.” What the hell does that even mean? But, modern, like I just wanted to use some different sounds and some more atmosphere. And I wanted to build things more from the rhythm side than from the acoustic guitar side. Because a lot of the times in the past, I’d drive the rhythm of the song with my right hand.

I had a conversation with Bill Withers not long before he passed away that really stuck with me. He had me up to his house and we were talking about some stuff. He had listened to my songs, and he kind of knew the titles. He called “Arms of a Woman” “Touch of a Woman.” … It’s not like I expect to Bill Withers to be listening to my records, but he said, “Sometimes it’s good to take the guitar out of your hands and let the rhythm lead.” And I was like, “Yeahhhh, man.”

On the song “Dreamland,” you’re singing, “I’m not afraid to dream.” And right after that, there’s the message of “Worry No More.” To me, it felt like a hug at the start of the record. Do you feel that way, too?

Yeah, the whole record is like a balance between isolation and despondency, and hope and resilience. That’s where the seesaw of the record is. There are times during the songs on the record where it’s very ambiguous, like, what is happening emotionally with this person? And that’s me. [laughs] So, I can attest to the ambiguity of my emotional state. But, you know, I like the idea of starting with “Dreamland,” and a little uncertainty, and then going into a song that’s reassuring. And then taking you into the darker elements, the cloudier elements. I think that there’s just a balance in there, on the record, between those emotional states.

I’ve been taking some long drives lately, and with an album like this, you can just put it on and listen to these songs as a whole and hear that range. Even in this era of playlists, you can still have the album format work.

Yeah, it definitely works, and the benefit to putting an album on, for multiple days, and just listening to it without letting your twitch twitch you off, is that you’ll fall in love with songs you didn’t know you would be able to fall in love with. I remember my first experience with that. I wasn’t even a huge music fan when I was young, like baby young. I got into music pretty heavy in middle school but I was listening to only hip hop and R&B. Folk or rock, none of that stuff was even remotely interesting to me. I mean, I heard Nirvana and was like, “That’s cool, I like that, but that’s not my thing.”

But my first experience as a record listener-slash-buyer was probably when I got one of those fake Columbia House accounts when I was 17. I think the first record I got was Bob Marley, Legend, and then I’m pretty sure they sent me Definitely Maybe, the Oasis record. I remember listening to that record a lot of times because I only had one or two albums. I remember being like, “Damn, I only wanted this for that one song, but I really like this whole record. I’m into this.” That was the first time where I realized the value of an album. All the hip hop records I got, I loved the whole thing. When I got my DAS EFX record or when I got my Boogie Down Productions record, all the Tribe records, Bell Biv Devoe — all of that’s my shit.

What record came along that made you take an interest in folk music?

John Prine, the Great Days anthology. He was my gateway. In college, I just got super deep into it. I cleaned out this guy’s basement. He was an older guy I knew who was sick and getting rid of a bunch of stuff. He told me if I cleaned out his basement, I could keep whatever records I wanted, because I had a record player. He had Another Side of Bob Dylan, he had a Mose Allison compilation, and I think Joni Mitchell, Clouds. I remember taking those three records home, being like, “Jesus! What is this? I’ve never heard this before.” It just sort of cracked my head open, but Prine, Great Days, was my comfort food music that I could always come back to, and still always do come back to. Although, since he passed away, I’ve had a little bit of a harder time listening.

Have you ever tried to trace back your love of language, and how that started for you?

I just always wrote. A lot of people grow up and they can paint or draw. I could never do either of those. At least it never came naturally to me. But writing was something that always flowed for me. Words and stories were always part of my life. I think part of it was because I was an only child growing up, and I didn’t have anyone else to help me form relationships. So, I had to form relationships with myself. And the best way to do that is through stories and through writing, because you can have a world in your brain where you’re living. I wonder how many new writers we’re going to find that are gonna come out of this extremely confusing, lonely time.

Were you an observant kid, always paying attention to what was going on?

Tried to be. When you’re an only child, you kind of have to be. For a big stretch of that time, it was just me and my mom. I grew up in the city, so you have to keep your head up and your head down at the same time. You have to be able to keep yourself safe when you leave the house, but not make yourself a mark, you know?

You listen to a song like “Seeing Ghosts” and that’s how I’ve always operated in the world, which is as an anonymous presence that tries to just float around. As an artist who has some sort of profile, it’s been harder at times. Although, thank goodness, I’m not famous, so I don’t really have to deal with that, which I love. I really value that invisibility as much as anything else, which is partially why I really like masks. [laughs] People are making this into a big political issue and I’m like, I actually like wearing them. It’s kind of awesome. If there’s someone walking down the street that I don’t want to talk to, it’s amazing! And it’s accepted! [laughs] I’m the Invisible Man, dude. I have my hat on, I have my hood up, I have my sunglasses on, my mask on. I think something’s definitely wrong with me.

When I listen to this record, though, it seems to me that you did go a little deeper into yourself, a little more revealing this time.

Yeah, I mean, I went all the way in. I dove deep, bro, and I’m still diving deep. It’s just sometimes you don’t want to go too heavy on the sauce, you know what I mean? Too much of that, I think you start losing the path. “Worry No More” is kind of about this – at some point you have to go do stuff with other people, and for other people. That’s such a big part of what we are as human beings. We’re a community-based people. We’re communal animals. We’re social animals. And the more you can reach out and do something for someone else, I promise you, the better you’re going to feel.