With Hard Banjo Rhythms and Striking Lyrics, This Is the Kit Offers ‘Off Off On’ 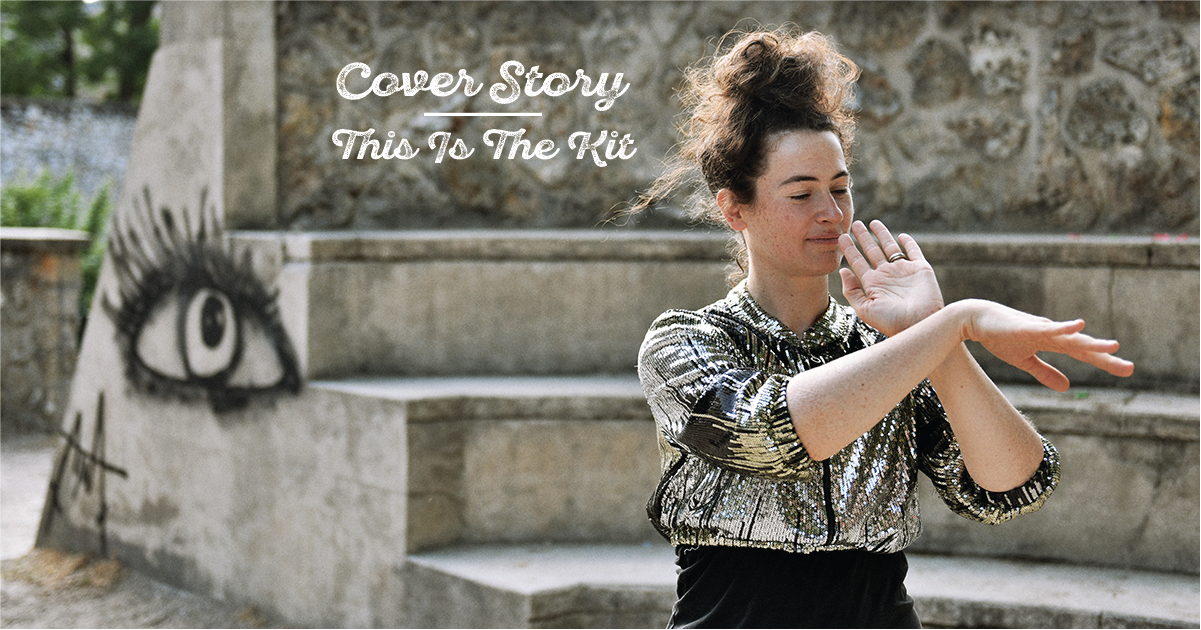 Kate Stables, principal of alternative roots outfit This Is the Kit, didn’t intend to write a pandemic album to follow her acclaimed 2017 debut, Moonshine Freeze. In fact, she wrote the entirety of Off Off On well before the term “COVID-19” entered our collective consciousness.

In the way that great art often can, though, the songs Stables wrote for Off Off On anticipated the needs of our current moment. Across 12 tracks, Stables sings of growth-inspiring personal reflection, the “two steps forward, one step back” nature of processing trauma, and continuing to move forward in the face of grief, all explored with deeply felt empathy and sharp insight.

Stables and her band recorded the bulk Off Off On prior to the COVID-19 lockdown alongside producer Josh Kaufman (Bonny Light Horseman, the Hold Steady) at Real World Studios in the U.K. Sonically, the album builds atop the lush, banjo-driven alternative folk of Moonshine Freeze, with complex, often subtle arrangements that offer thoughtful soundscapes for Stables’ striking lyrics.

BGS caught up with Stables via Skype to discuss finding sources of inspiration, writing about difficult personal moments, and living as a musician during the COVID-19 lockdown.

BGS: To start us off, everyone has had their own specific difficulties resulting from the pandemic, but musicians, especially, have been dealt a tough blow. How has that affected you and how have you adjusted to being home more, and not being able to tour this record?

Stables: At first, it was kind of novel and a bit of a relief, almost. For the first summer in living memory, I didn’t have loads of festivals to do. So it was a summer I spent with my family doing family stuff instead. So that was nice, at first. Now that the time for actual touring would have been starting soon but it isn’t starting soon, it feels a bit weird. It’s the longest amount of time I’ve ever gone without playing gigs and without touring. So it feels really weird and I miss doing gigs so much. And I really miss my band. They’re in the U.K. and I’m in France. I’ve never gone this long without seeing them.

With regard to the album, you wrote and completed the majority of it before the pandemic started. What were the origins of the album and how has its meaning evolved for you since you first began plotting it?

I don’t usually have a pre-album vision. It’s normally just me writing songs as and when they come and seeing what kind of shape it all takes along the way. One of the earliest songs that was written for this album was “Started Again.” “Started Again” is almost a bit of a bridge song from the last album to this album, because I feel like it could have gone on either, in terms of what I was thinking about. It feels like it’s connected to my past life, in a way, because I feel like everyone has a new type of life now. The world has passed through this strange portal and we’re all a bit different and have to adapt to things. It’s not an obviously key song on this album… but it’s also a bit linked to my thinking about perseverance and getting through the difficulties and coming out the other side again and again. It’s funny because that’s also what the world seems to be dealing with at the moment. Those are themes that accidentally came out while writing the album, without knowing that COVID-19 was coming.

I read the track-by-track notes that you wrote for the album, and one line that stuck out to me was, “Listening through to these recordings, I hear new COVID-19 references every day.” Could you elaborate on that? I heard some myself when I was listening, but am curious as to which resonated with you.

Partly there’s the “we’ve all got to get through this” that I was dealing with in the album, which now seems like I’m talking about COVID. There are lines like, “Try not to cough.” That is too ridiculous and coincidental. There’s a song about a hospital and the breathing apparatus in the hospital; that felt spooky, now that so many people are in hospitals than ever before. Things that were written with one story in mind and now this new situation has given them another story.

I’ve talked to a few other artists who have had similar experiences. It’s interesting, because obviously no one could have predicted where we are now, but it does make you wonder if you were intuiting that we were collectively going down this road.

Yeah, are we all tuned into something that we don’t know about? It does feel weird. I think also with writing, and you may get this in your work, you do end up with funny coincidences and predicting the future accidentally sometimes. It’s just the way it goes when you’re working with words and language and storytelling, whether it’s journalism or fiction or songwriting. These weird cosmic moments do happen.

One of my favorite tracks, both sonically and lyrically, is “This Is What You Did.” How did you write that one?

Writing it was fun because it was an example of me playing with rhythm, which is my favorite thing to do. I tried to find a banjo-picking pattern that was quite hard, something I almost couldn’t do, and worked until I got it. I tried to find a pattern where I wasn’t using the same fingers every time, something as random as possible. The beats were regular but the strings I was picking were somewhat randomly generated. Then I tried to find vocal rhythms that were difficult for me to sing at the same time. I guess it was like brain gymnastics. I like it when you can’t tell where a pattern starts and finishes. … That repetitive, cyclical nature of the music lent itself to this mind-loop approach with the lyrics.

Reading through your notes about “No Such Thing,” you reference both Jack Kornfield and Jane Austen as inspirations. How do you find inspiration? Do you always have your antenna up?

Language is the material I work in and I really enjoy exploring other people’s work with language. When I hear a phrase that makes me laugh or that sounds pleasing to say out loud, I’m always noting down little quotes of things that make a spark in my brain, even if it’s something out of Bob’s Burgers or something… So I guess I do always have a bit of a radar up for rhymes, assonance alliteration; things like that make my ears prick up.

When you reach the point in your writing process when you’re ready to fully arrange a song, what does your collaboration with your band look like? They’re such fantastic players and it sounds like you’re all quite close.

Sometimes I have a bit of an idea of the vibe or the kind of pace that I was envisaging for a song, but it’s also nice to not say anything until they’ve tried something out. Quite often they’ll find something that’s better than what I had in mind. I’ve ended up with three of my favorite musicians playing in my band, which feels like a privilege and a real kind of fluke. So it’s nice to let them do their own thing as much as possible. I’d be interested to know, though, if they think that’s what I do. Maybe they think I’m really controlling. [Laughs] What I hope I do is let them have space to do their stuff.

Prior to lockdown, you got to spend a lot of time on the road with the National. How does playing as part of someone else’s project inform your work as a solo artist?

In a few ways, but it’s hard to put your finger on one. Traveling is nutritious for me in terms of writing and wellbeing and being inspired. The act of traveling, even just looking out the window while you’re going along the road, is inspiring. But also the fact that you’re going to different places and meeting new people and having these new experiences… Also just seeing how other people work. I found it fascinating to be part of this symbiotic ecosystem that’s going around on tour. Everyone plays an important part and looks out for each other and it’s really fascinating to see how other people tour.

It’s a bit tricky to look too far ahead right now, but, in addition to getting your album out, what are you looking forward to in the coming months?

Because the gigs aren’t there to be looked forward to, I think I’m looking forward to seeing what I can get done instead. There are a lot of musical projects that I’d love to get stuck into, and I hope that I just will. This time, we’re all learning how to be ready for anything and not to assume that something is going to happen, so, ideally, I’ll just be making music instead of touring. I really hope I’ll be able to make music with people, even if it’s long-distance.