Yo-Yo Ma and the Silk Road Ensemble: Tearing Down the Wall 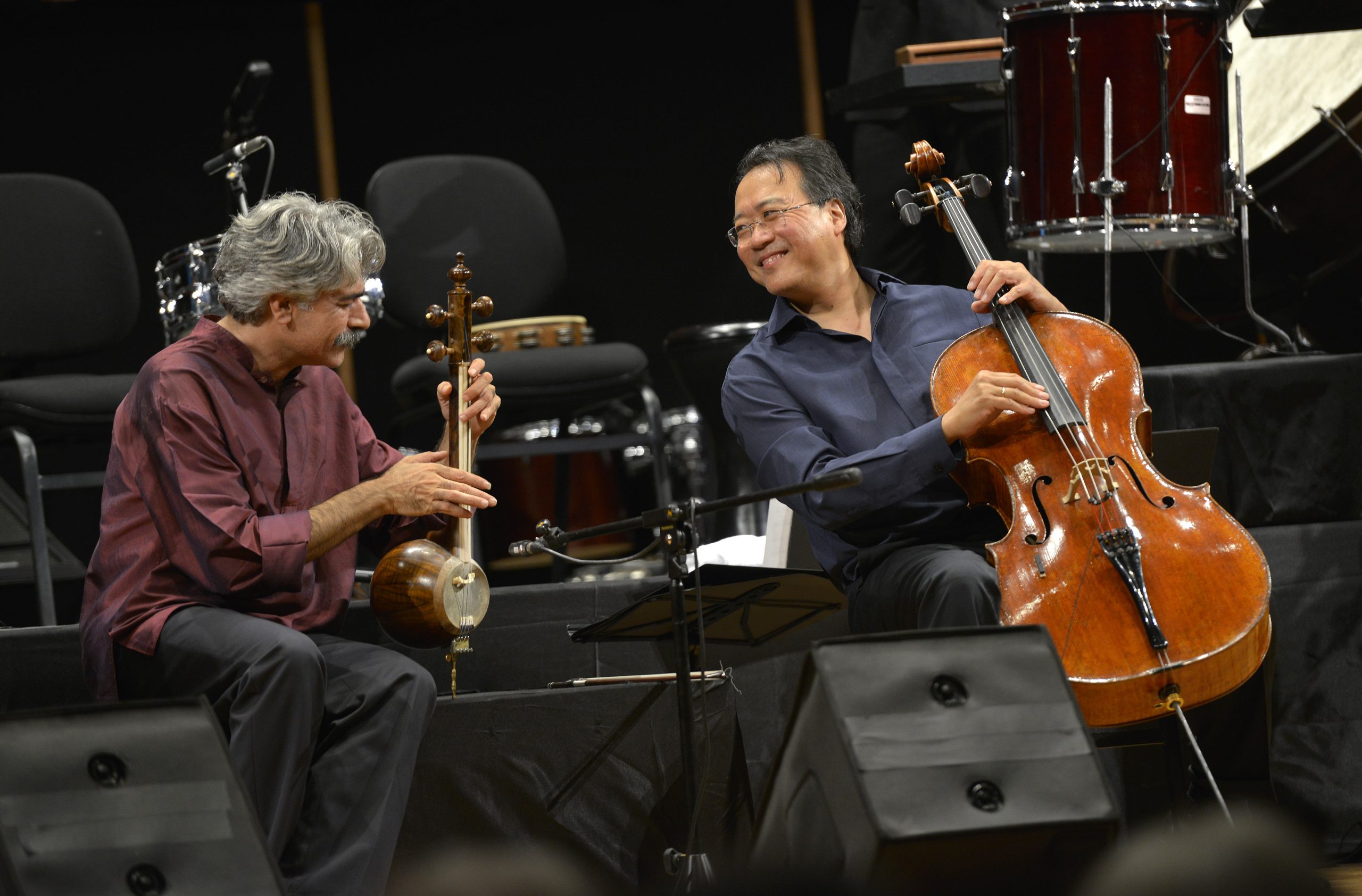 Election years are rife with divisive rhetoric, with 2016 perhaps taking the cake — thanks to deeply split parties and a man named Donald Drumpf blathering about building a literal wall between Mexico and the United States — for the most inflammatory, insufferable year yet. It’s during times like these that people often turn to art for comfort, whether through searching for answers in protest music or simply turning up the volume to drown out all of the noise.

It’s appropriate, then, that Yo-Yo Ma and the Silk Road Ensemble just released their latest album, Sing Me Home. It is an eclectic collection of genre-defying songs put together by Ma and his virtuosic group of performers and composers, whose backgrounds span 20 countries. The Ensemble is built on collaboration and cross-cultural conversation, an approach that sees players taking turns leading the group, choosing and arranging songs that either represent their cultural heritage or contain personal significance. The resulting music would best be described as what Ma calls “humanist” more than it could easily fit any genre label or regional attribution.

“What I love about the Ensemble is that there are so many people who can both be part of a group but also can lead a group,” he explains. “The idea is that obviously everyone has such individual personality and identity and voice that you want to celebrate it. Cristina [Pato], for example, is from Galicia in the northern part of Spain. She was a rock musician bagpipe player and played in sort of a girl band as a teenager and then came to the States. She’s learned so much about the cross-cultural references that went back and forth between Spain, Portugal, North and South America, and Africa. She found a way to bring all of her experiences in both Galicia and the United States together. So that’s another wonderful way of her leading us, taking us to a place that is familiar to her and that we were guests and then became participants in.”

Accordingly, listening to Sing Me Home takes you on a sonic trip across the globe, hopping from India to Portugal within the span of a couple minutes. In addition to representing their traditions through song selection, Ensemble members also had the opportunity to choose the album’s impressive roster of guest musicians, which includes Abigail Washburn, Sarah Jarosz, Bill Frisell, Shujaat Khan, and many others.

“[The guest roster] is all chosen by different Ensemble members,” Ma says. “Colin [Jacobsen] loved Martin Hayes, the fiddler, so he initiated that and that was fantastic. In each case it was, I think, friendships. Kayhan [Kalhor] brought the great Indian sitarist Shujaat Khan. They’d been playing together for 45 years and they are like family to one another. So I think friendships, that’s key. Friendships where the trust and the admiration for what somebody does are probably the key ingredients that made all of those relationships work.”

Rhiannon Giddens also guests on the album, adding vocals to a remarkable version of the classic folksong “St. James Infirmary Blues” that the Ensemble arranged after accordion player Michael Ward-Bergeman heard the tune in a London pub, worked through it with a group of Romanian musicians, and ultimately brought it to Silk Road. Giddens, known for both her solo work and as part of the Carolina Chocolate Drops, adds an Appalachian touch, seamlessly bridging the gaps between her own North Carolina upbringing, Ward-Bergeman’s Romanian flourishes, and the cover’s fortuitous origin in a British pub.

“She is so fantastic,” Ma says of Giddens. “I’m so moved by what she does. I don’t know what it is. It’s so strong and so powerful and it’s like she’s giving 100 percent. It’s so authentic. It’s just amazing.”

Even with such a talented group of performers and composers, bringing those seemingly disparate elements together was no easy task. Ensemble member Johnny Gandelsman, who produced the album in addition to playing violin, was able to do exactly that. “Johnny is our heart and soul,” Ma says. “And he actually did put his heart and soul into it. He is so immensely talented. Sometimes, when people have so much talent, you can actually not know how to go about doing it all. But he has such a gift for organizing, for getting everybody lined up, making everything go on time, making guests feel comfortable. It was amazing because we never knew that side existed in him.”

For Ma, making great music is important, but uniting players across cultural lines and providing listeners with global reference points they may not have otherwise are the utmost goals of the Ensemble. In an election year, especially, Ma sees music and culture as invaluable components of civilized society, and as a chief method through which damaging walls between social and cultural groups get torn down.

“It’s not about, ‘We must build a wall.’ It becomes a much more nuanced approach to looking at people, traditions, and, in that context, you can look at socio-political and economic situations,” Ma says. “Without the culture, we get into having a war and not planning for what happens afterward. With the culture, you know what you’re getting into. You think carefully about what to do afterward. When you think about how your friends will react to some information you might bring, you’re careful about the way you say it, the tone. And this is true of everything. I think that’s where cultural knowledge can really help. We may not be able to solve the situation, but at least we can help add nuance to the way certain communications are made.”

Sing Me Home is nothing if not nuanced, both in its musical performances and its meticulous homage to the home countries of the Ensemble members. That it still manages to balance that attention to detail with a scope that — sonically and socially — encompasses such a diverse range of perspectives is a testament to the talent, vision, and kindness of those involved with the group. Ma’s own assessment of the music is spot on: This is human music (or, let’s be honest, superhuman — we’re talking about Yo-Yo Ma, after all), made for and by people who care deeply for others, regardless of borders or party affiliations.

“We want to be a society that is actually open, not only to one another, but open humanistically,” Ma says. “We just want to make sure that we’re dealing with humans as three-dimensional people and not just as statistics. So, even though we may not be able to solve the situation, the least we can do is make sure that the dignity of humans is always in everybody’s mind, no matter which sector they’re coming from, in trying to solve a problem. And I think the music does that.”