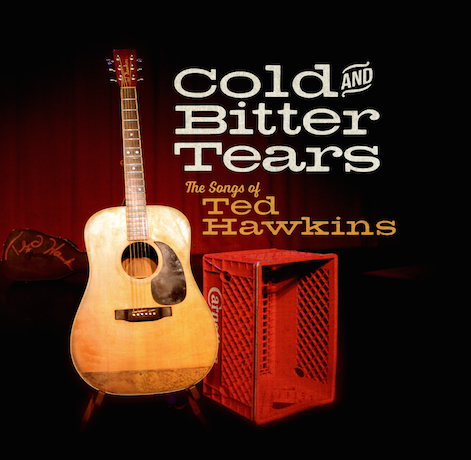 For most of his career, such as it was, Ted Hawkins was a street performer in Southern California, entertaining tourists and locals alike on the Venice Beach Boardwalk and the Third Street Promenade in Santa Monica — his sandpaper voice a perfect companion for his poignant tunes. Many musical types tried to “discover” him over the years, so Hawkins ended up with a handful of releases on different labels, big and small, before he passed away in 1995. His debut, 1982's Watch Your Step, even won a five-star review in Rolling Stone.

On October 23, the first-ever tribute album to Hawkins will find its way into the world. Cold and Bitter Tears: The Songs of Ted Hawkins features a host of superb singer/songwriters — including James McMurtry, Kasey Chambers, Mary Gauthier, Tim Easton, and Sunny Sweeney — paying their respects to the largely unknown great. As his Los Angeles Times obituary read, “At the time of his death, Hawkins remained the greatest singer you’ve never heard. Hawkins clearly was transported somewhere else as he sang, and when he became aware of the audience, he seemed dazed: [Everyone] applauding wildly, some in tears from the sheer, sad beauty of his songs.”

The first track to emerge from Cold and Bitter Tears is Gauthier’s rendering of “Sorry You're Sick.” She says of the pairing, "I knew I could find the center of that song because I'm an alcoholic. I'm in recovery and sober a long time, but I know that feeling of being in a room with someone who's dope sick or booze sick and what you need to get them is dope or booze. Having experienced it, it touched me and brought me back to a time in my life that was truly difficult. [Hawkins'] songs are timeless. What matters is that people get to hear them and this project will increase the opportunity to discover these songs.”

Cold and Bitter Tears: The Songs of Ted Hawkins drops on October 23 via Austin's Eight 30 Records.