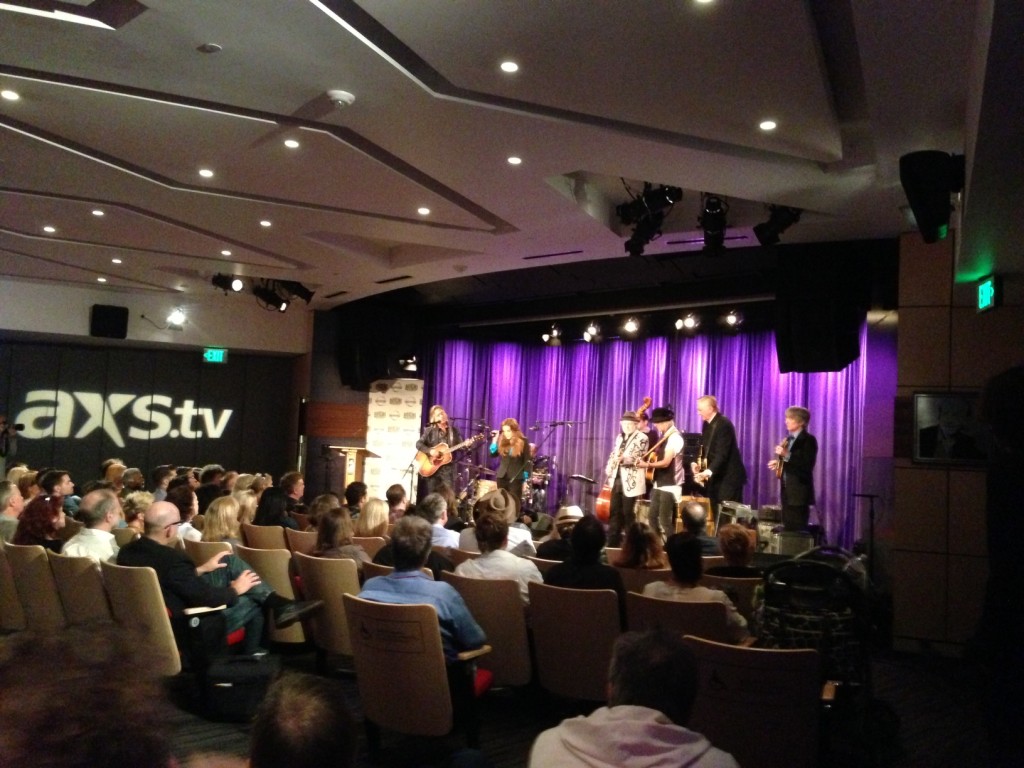 Though the ceremony was brief, there was a festive and electric atmosphere in the Clive Davis Theater in LA Live yesterday. AXS TV was filming the proceedings and as usual Jim Lauderdale was the grinning ringleader, joining his long time partner in crime Buddy Miller and their house band in a galloping version of the late George Jones’ “The Race Is On” to open the show. Honoring Mr. Jones was a fitting way to start, as it seems much of the AMA’s main mission is to honor and bring respect to roots, acoustic and folk artists and traditions, not merely hype them.

T-Bone Burnett was in the house in a stylishly funereal black suit and called Americana music our nation’s “greatest cultural export”, with men like Louis Armstrong being our greatest ambassadors imaginable. He was particularly impressed with the newest crop of young musicians making a name for themselves while subtly sampling specific traditions of the last century. He then introduced the skinny-tied, close-harmony experts The Milk Carton Kids who, if you haven’t seen them, really do live up the hype they’ve been accruing on a near constant touring schedule of theaters and festivals. While some may criticize the whispery, choir-boy similarities to early Simon and Garfunkel (think “Wednesday Morning: 3AM”), really they seem to be exemplifying precisely the something-old-and-something-new dynamic that T-Bone was referencing. One can’t help but lean forward in your seat when they play. Plus they are quite funny chaps – noting that since T-Bone Burnett had introduced them on live TV, they must suddenly be famous.

Of course, being famous and overexposed in a main stream sense is not something The AMA community seems all that interested in. Authenticity, skill and artistry rule the roost. As the Milk Carton Kids wrapped up with a deliciously deconstructed version of “Swing Low”, they noted the most important thing about Americana fans is that they cut the bullshit and actually listen. Jed Hilly, executive director of the AMAs followed the lads at the podium, noting that the awards were about showcasing the community as a whole.

Lauderdale and Miller thundered through “Lost The Job Of Loving You” and the Flatt & Scruggs favorite “The Train To Carry My Gal From Town” before introducing the day’s surprise guest – Lisa Marie Presley. She seemed tiny next to the lanky Lauderdale and T-bone as the men backed her on a sad, low-drawled ballad, but her voice was in prime form: soulful, weary, deep. Americana? It’s the shit the masses ignored, Presley remarked, with just a hint of edge in her voice…as if to say: what is their problem anyway?

Next up, Elizabeth Cook brought a bit of her twang and sunshiny humor into the room – plugging her new gospel album while also wondering if someone like her should be doing religious music at all – “I might burst into flames at any moment” she cracked, sending out one of her tunes to Buddha, Allah…whoever! Actually she brings up a good point. If Americana involves the whole spectrum of American song-craft, one must add gospel as perhaps the deepest root of the tree – and the genre maybe most available for evolution and transformation.

After 45 minutes of stories and songs, Presley and Cook got together behind the podium to read the nominations. Among the recurring stand-outs this year were old favorites Emmylou Harris, Richard Thompson and Buddy and Jim but none seemed to get more love than Charleston, SC-based duo Shovels and Rope, who AMA members voted for early and often: tapping them in the Emerging Artist category as well as Song Of The Year, Duo or Group of The Year and Album of The Year for their release “O’ Be Joyful” (Dualtone). It was almost surprising but welcome to see a rare mainstream hit single, “Ho Hey” by the Lumineers also be included. See? There is money in it!

Emerging artists like fellow Oklahomans John Fullbright and JD McPherson, the aforementioned Milk Carton Kids and Shovels and Rope show that the future of the Americana and roots community is in good hands.

For a full list of nominees and more information about the Americana Music Association, visit http://americanamusic.org