Artist of the Month: Trampled by Turtles 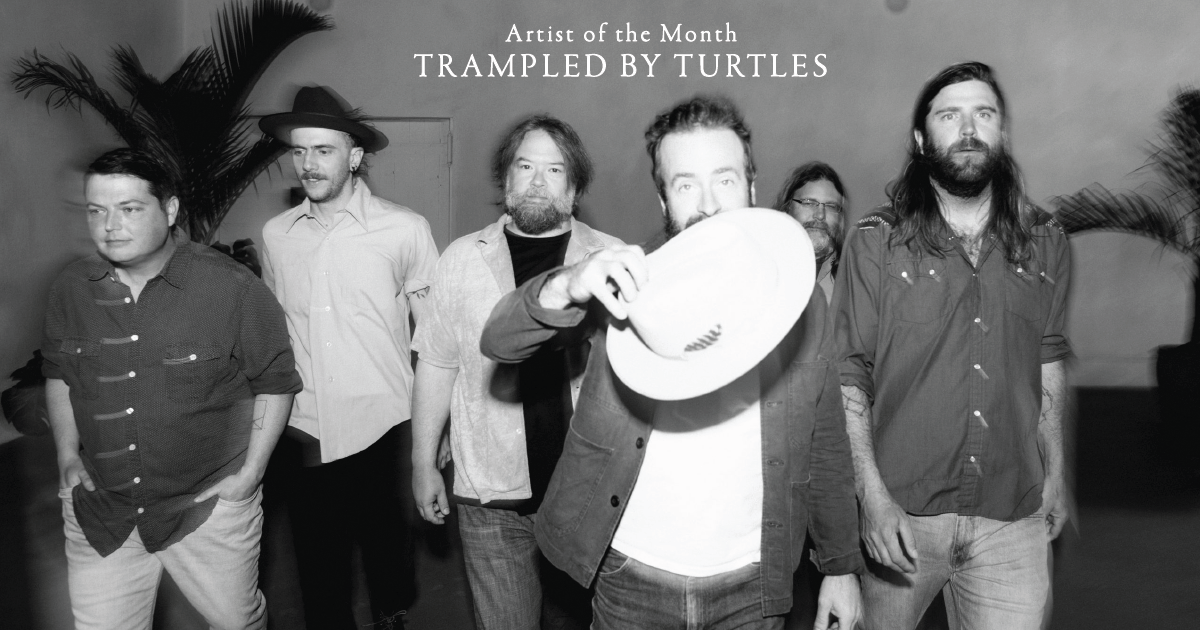 At a steady pace, Trampled by Turtles have built an international following for their acoustic music from their home base of Duluth, Minnesota. They have maintained a DIY aesthetic for nearly two decades, yet they opted for a new approach for their latest album, Alpenglow. Using an outside producer for the first time, the band enlisted Jeff Tweedy to helm the project, which was recorded at Wilco’s recording studio in Chicago.

“I came in with songs I thought were finished, and then Jeff was really great about taking them apart, adding something here, taking something away there,” says Trampled by Turtles frontman Dave Simonett. “He gave us fresh ears on songs and new ideas for how to present them. We all just sat in a circle and played. It’s scarier to record that way now, since it’s easy to fix everything or record everything separately so you can hear it all perfectly. But for me, it’s so much fun to just stick a few mics up and play. That’s where we’re at our best.”

Tweedy also brought one of his own songs, “A Lifetime to Find,” to the fold. Although Simonett has written a bulk of the songs recorded by Trampled by Turtles over the years, he welcomed the chance to include the composition. “It’s a really simple song, but also not simple in some ways,” says Simonett. “I love how Jeff uses language so much. It was a real honor for us to record one of Jeff’s songs. I love the story he tells and the way he tells it. A conversation with death — who hasn’t had one of those?”

Of course, Tweedy counts himself as a fan of Trampled by Turtles, too. He observes, “I enjoy TBT’s musicianship and ability to stick hard inside a genre, all the while stretching that same genre. It’s like you need to infiltrate it before you can pull it apart. They have a brotherly thing going on, too, which is always a great feel.”

Alpenglow is named for the effect of the sun setting over mountains, with the light tinting them pink and red. It’s only natural to pause and reflect at the splendor of such magnificent scenery, and the title hints at the introspection that may be found throughout the album, particularly after the pandemic put their touring plans on hold for a year or more.

Simonett says, “In your 40s with kids, not many people get to say, ‘Man, do I have the chance to do something completely different if I want to?’ I ended up finding out that I really enjoyed what I do. It was good for me to think about that and really appreciate it. So once we were back, it felt like a second go — and I think a lot of these songs came from that little feeling of renewal.”

The Bluegrass Situation is proud to reveal Trampled by Turtles as our BGS Artist of the Month for November. Look for an exclusive interview in the weeks ahead, along with some content from our archives (like this Cover Story from 2018). We’re pretty excited to see them on the Cayamo Cruise in 2023 as well. In the meantime, enjoy our BGS Essentials playlist for Trampled by Turtles.