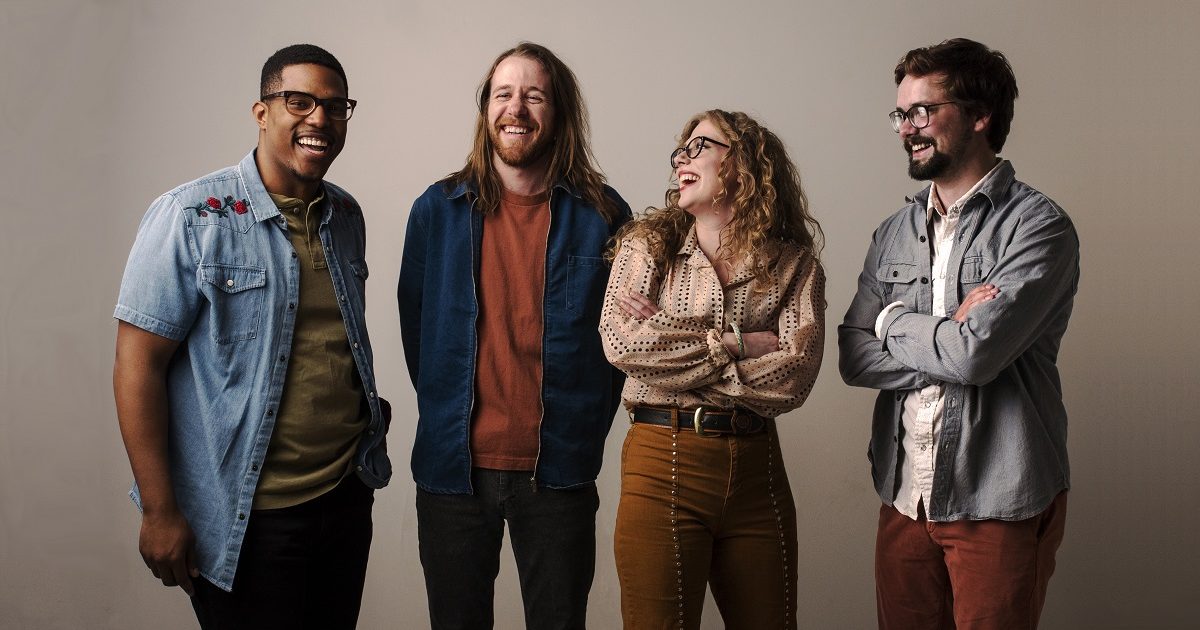 Barbaro’s first full-length studio album, Dressed in Roses, stands as a true testament to their musical identity and the sound that has launched one of the Midwest’s most in-demand acoustic acts. In a phone interview with Kyle Shelstad, the Minnesota group’s guitarist and lead singer, BGS discussed the arranging process behind these songs, how the band has grown, and the current state of the Midwest bluegrass scene.

BGS: You’ve released singles and an EP in the past, but tell me a little about this album. What was the impetus for making Dressed in Roses?

Kyle Shelstad: In general, I feel like the album is a good testament to our sound right now, and also to where we’re hoping to go. We recorded this with the unit being together for about a year. Some of the songs Isaac [Sammis, on banjo] and I had for a couple years prior, before Rachel [Calvert, on fiddle and vocals] and Jason [Wells, on bass] joined the band. After they joined the band these songs kind of had a new life and developed their own sounds.

You re-recorded the songs “Barbaro” and “Loathe.” Did that experience shine a light on how you’ve developed as a band in the past few years?

Exactly. While the arrangement was pretty similar, I think the way we play it as a group has definitely changed. So I think our goal in doing that was to pay homage to the sound we have now and the work we’ve been doing on it.

I think this is your most consistent album yet. When the band first came together did you have an idea of what you wanted the sound to be like, or has that organically grown over the years?

It’s definitely organically grown, but I’ve also always had an idea of what I wanted to do. Isaac and I started playing together as just a guitar and banjo duo, and we had to find ways to make that… well, not super annoying. So we tried to focus on texture and arrangements.

I’m glad to hear that you think it has a consistent sound because part of it, for me, I was concerned. It has a lot of different thoughts and ideas thrown at it. In that sense I think this album is a lot about us trying to figure out our sound. Developing it that way.

Some of your songs seamlessly turn from folk ballads to sections of straight-up funk. How much discussion was there in arranging these songs that are so texturally complex?

I think it’s twofold on that. A lot of these songs I come into with an idea of how I want them to progress and where I hear the song going. But adding Jason on the bass throws some of these ideas on their heads, because he had literally never listened to bluegrass before we got him to play with us. He’s done a lot of studying and research on his own to figure out how that sound works, but at the same time that’s not necessarily what he wants to play. There will be times where I’ll say, “Hey dude, maybe you should just play the root note four-on-the-floor,” and he’ll say, “I don’t know, man, I don’t really like that.”

He really brings a different flavor. When I think the song is going one way he’ll take it a completely different direction. I’ll come in with the ideas and the direction of the tune. That main idea and where I want it to go. But sometimes how we get to that point changes because of the players we have, with Rachel and Jason having such a classical background. These songs moving in all these different directions is part of us trying to figure out our sound and how to cohesively bring these ideas that we enjoy together.

Also, I listen to a lot of jazz trios, and while there’s form there, it’s not like it’s verse-chorus-verse-chorus-bridge-chorus-out. I guess part of me feels like I can’t write that kind of stuff very well. Or when I do it sounds too corny to me or something. I enjoy that certain jazz music goes somewhere. There’s always a little thing thrown in there to catch your ear or catch you off-guard.

One thing I’ve noticed when seeing you live is that, while you do have these very cerebral arrangements, you have no problems engaging the audience and taking them with you through these songs.

Yeah, that’s our goal and what we’ve always been trying to figure out. How to write a set list that can put forward what we’re trying to accomplish with these songs but also keep people engaged. I think that took us a little while to figure out. Unfortunately we can’t play songs that we want to play all the time. It depends on the crowd and we need to figure out how we’re going to best get these songs across to this crowd or that crowd.

Did you have any epiphanies or learning experiences in the course of making this album?

As far as epiphanies go, I used to play with Kitchen Dwellers, which is a completely different type of music from what I’m playing now, but a lot of it was based on improvisation and free-flowing. So when you bring in people like Jason and Rachel who are very classically-focused — that’s sometimes an uncomfortable place for them to be. That’s something where we’ve figured out how to work together. We can still have some solid structure, but then find opportunities where we can open up and allow the music to flow in whatever direction that might be.

Speaking of different types of music, what was it like working with your producer Adam Gruel? Horseshoes & Hand Grenades [Gruel’s band] is such a different sound from what you play. How did he influence you as a producer?

I’ve known Adam and the Horseshoes guys for a while. I first met them when we were in the Telluride band competition years back, so he’s always been a buddy of mine. He heard that we were recording an album and reached out to let us know that he had done some producing work and would be super interested in working with us.

That was kind of my first thought, too: “The kind of music you do is completely different from what we’re doing.” But I thought about who Adam is as a person and I thought having that type of energy in the studio would really help us out. Sometimes we’ll sit in rehearsal and spend four or five hours on one section of a song and just beat it to death. To the point where we hate each other and we hate the song.

So bringing Adam in there was a good idea because he knows when to move forward and he has this incredible energy and positivity that allowed us to not fall into that dark hole. After two takes he’d be like, “All right, we got it, let’s move on.” I think that really helped us accomplish what we needed to accomplish in the amount of time that we had.

The Midwest is a hidden gem for bluegrass music with bands like yours, Barbaro and Horseshoes & Hand Grenades. What do you wish people knew about the bluegrass scene in the Midwest?

There are amazing local bands that play really good tunes and bring people out and keep it full at the bar until the end of the night. It’s a lively scene and it’s only growing. One of our goals is to bring more diversity to the scene and open people up to the idea that this music spreads really wide. There’s lots of different ways that this music can be interpreted. We’re just trying to grow and build this scene even more.