Béla Fleck: “It’s Clear to Me That Bluegrass Is Still My Defining Element” 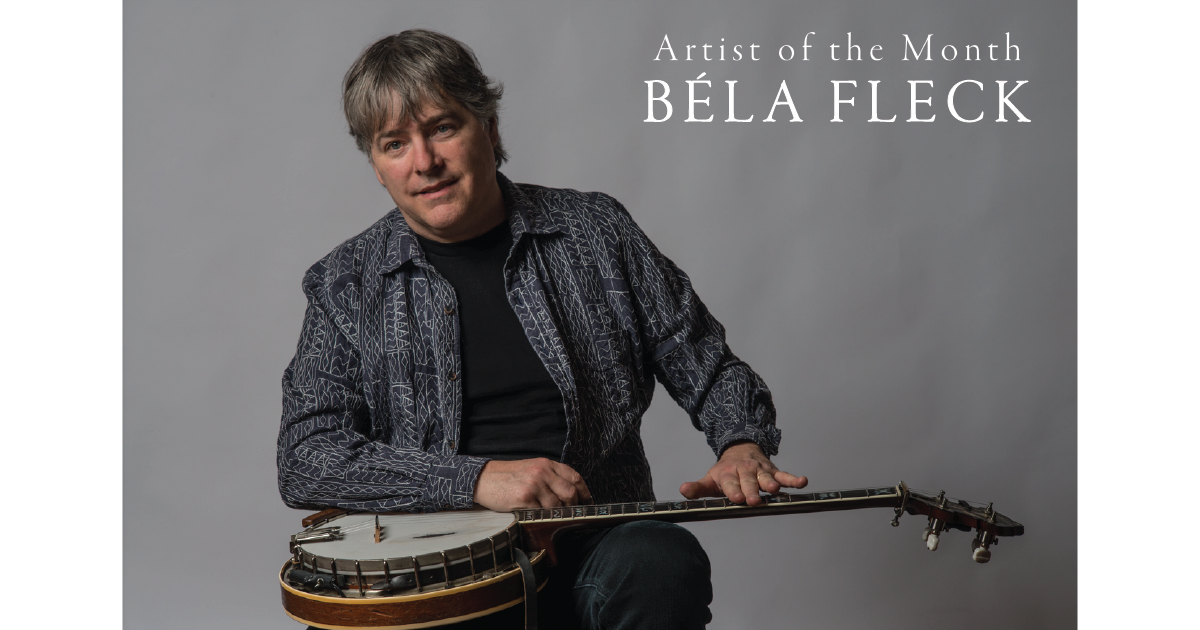 Novelist Thomas Wolfe famously declared that you can’t go home again. But then again, Wolfe is not remembered as a musician who played bluegrass, a style that’s all about going home again.

So it is that Béla Fleck’s new album is a homecoming, and an ambitious one at that. A third installment in Fleck’s long-running bluegrass trilogy, My Bluegrass Heart (Renew/BMG Records) is his first bluegrass album of this century. It’s a double-disc effort with an all-star cast – from old hands like Sam Bush and Jerry Douglas to new stars including Sierra Hull, Molly Tuttle, Chris Thile, Billy Strings, and more – with a running time not much shorter than the first two volumes put together.

“It’s hard to get around,” Fleck says. “As much as I may pretend to be something else, I am bluegrass at heart and that’s okay. It’s something I’m proud of and have come to embrace more as time goes on. Part of that is aging – do something when you’re young and you may not want that to be what defines you. Bluegrass just seemed like too obvious a pigeonhole for a banjo player when I was starting out and there was so much other music I loved, too. But after a lot of exploring, it’s clear to me that bluegrass is still my defining element.”

The album title of My Bluegrass Heart is actually a riff on an unexpected source, the late jazz pianist Chick Corea, a sometime collaborator of Fleck’s. One of Fleck’s favorite Corea albums was 1976’s My Spanish Heart, an ironic title because Corea was of Italian rather than Spanish descent.

“He was a guy from Boston with a natural affinity for Latin music, which was central to who he was even though he did not have legit entry in terms of ethnicity,” Fleck says. “That resonates for me. I’m from New York, of Eastern European and Russian descent with no natural connection to folk or bluegrass. So I’m defining myself with music that’s not necessarily my heritage, but being an outsider helps you bring new things to the idiom. When I go off to study Indian music, I can come back and write this album’s ‘Vertigo,’ which has very Indian rhythmic devices. Finding a way to insert Indian music or jazz or classical into bluegrass is very satisfying.”

The roots of My Bluegrass Heart go all the way back to Fleck’s first bluegrass album, 1988’s Drive, which he made with a core group including Bush, Douglas, Stuart Duncan, Mark Schatz, and most notable of all the late great guitarist Tony Rice (to whom the new album is dedicated, along with Corea). That same cast appeared on the 1999 follow-up, The Bluegrass Sessions: Tales From the Acoustic Planet, Vol. 2.

Had Fleck had his way, the same crew would have convened for volume three, and it would have come out many years ago. But the holdup was Rice, the troubled but brilliant guitarist who died in 2020 on Christmas day after years of health struggles.

“Playing bluegrass with Tony Rice was such a profound, dramatic upgrade from anything I’d ever experienced before,” Fleck says. “I wanted to do it again and reached out a lot over the years, but there was no response. I was puzzled and disappointed. Hurt, even. But come to find out that a lot of his other friends were going through the same thing with him as he started to isolate. He was not confident about playing anymore, so he shut it down and withdrew. And at a certain point, I heard about some close musician friends of mine who were starting to have hand problems. I thought, ‘If I don’t do this soon, some people I want to play with might not be able to anymore.’”

To that end, Fleck convened the surviving cast from his first two bluegrass forays, while adding young guns like Strings and Tuttle as well as other longtime pals including Tony Trischka, David Grisman, and Michael Cleveland. There’s plenty of firepower throughout these 19 tracks, especially on “Slippery Eel” — the first-ever studio work featuring the pairing of Strings and Thile. Fleck did his best to come up with something that would challenge those two, but notes that, “Of course they made it look easy.”

All 19 tracks are instrumentals, with a conservatory feel akin to Punch Brothers (several of whom appear) or the Kruger Brothers. But there are vocals of a sort, between-song quips and jokes by various players.

“This is such a community record and I thought it’d be cool for people to know this bluegrass community through these voices,” Fleck says. “You know, Sierra Hull talking, Tony Trischka and Jerry Douglas laughing, Sam Bush being silly, David Grisman being David Grisman. I think people in the bluegrass world will know every voice. When I’d play the record for people, they would always tell me, ‘I hope you keep that stuff in. It really humanizes it.’ I’m really excited and satisfied with everything about this record. The community aspect, hearing everybody play and talk, makes me happy. It’s like a love letter to the bluegrass community. If there’s ever been any doubt I love this music, there’s this.”

Editor’s note: Read about more about our Artist of the Month, Béla Fleck, here.