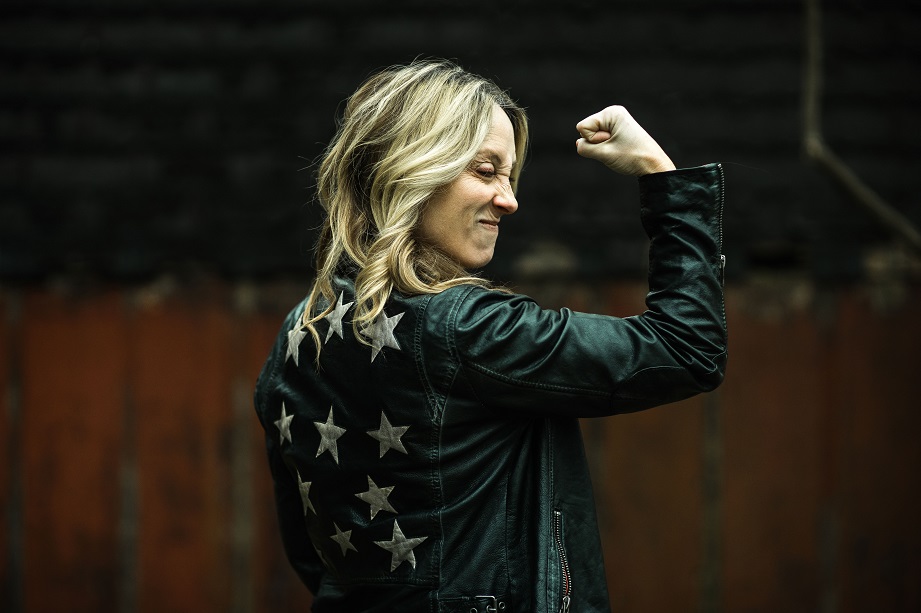 I remember from way back, because I started playing piano at age 3 (or so the story goes) and started formal lessons at 5, that I could disappear into my own world at the piano, inside the sound. I didn’t understand it but inside music was always this safe space for me.

So it’s hard to pinpoint when I wanted “to be” a musician because my earliest memories are that I was a musician. I just understood music from the start. Not that I didn’t have to work and practice, but it just made sense to me. So I’d chase that feeling back to being too short for my feet to hit the pedals practicing scales on my grandmother’s black upright piano.

Definitely all forms of storytelling. I didn’t write a song until I was about 28 but all through my childhood, I wrote poetry and stories and plays. I drew and painted. I read everything I could get my hands on. In college, I was a dual major in English and Theater and got obsessed with Shakespeare, Performance Art and Avant Garde Theater and Improv Comedy.

Then I went to NYC after college to study classical acting at The National Shakespeare Conservatory for two years and for the first time in my life started going to art museums and got lost in the big physical paintings of Pollock and Rothko. I lived in the Lower East Side and in Greenwich Village and really really loved living in that kind of Bohemia in my 20s.

I worked three jobs, one of which was as Lainie Kazan’s assistant on Broadway and in her cabaret shows, where I got the chance to meet so many legends of the theater. I hung out with dancers and clowns and actors and musicians and poets and we were all broke and idealistic and scrappy and I went to every show, every concert, every happening I could talk my way into.

I mean, there’s not really an art form out there that hasn’t moved me to tears and to want to create something of my own in response, from seeing Sondheim on Broadway to a poetry slam in the Lower East Side to my friend dancing burlesque. It all kind of informs whatever soup is all up there in my head, processing the pictures and the emotions and the memories. But when it gets down to pen on paper and crafting a song, I think that’s when film is really my guide: I think like a director/screenwriter/playwright. What’s the entry point in the story? What do you see out there? What’s the landscape like.

Easy. That will be the next one I write after I finish this one I’m working on. Because it’s always like starting over at the beginning and I go through all the fears that I’ll never write another good song again and I’ll just sink into the ocean of bad cliches and stolen melodies.

Probably the earliest, honestly. I was in 8th grade, Curtin Middle School in Williamsport, Pennsylvania. I was a very awkward, permed hair, 14-year-old. Bookworm, nerd, and not really that cool. I had joined chorus for the first time (I didn’t think I was a good singer) because my best friend Laura was a good singer and convinced me to join.

The end of the year the choir did a musical theater revue. I was kind of a class ham, very theatrical, did all the accents, and the choir director gave me a solo doing “Adelaide’s Lament” from Guys and Dolls because I could fake a good thick Bronx accent. I will honestly never forget how I felt when I stepped out onstage and the lights were on me and I disappeared into this character. It felt like the crowd roared and I got a standing ovation and the next day was like a freaking Christmas parade…

I went from being the new kid at school to everyone looking at me as if for the first time. The choir director took me aside and really encouraged me to study voice. She said, “I hear something in there…I think that you have a gift.” And literally, from that moment on, I knew I wanted to be onstage singing. I literally felt like I’d found myself that night.

I’ve had incredible stage moments, like being onstage at Town Hall in NYC opening for Nanci Griffith to a sold-out crowd — and you could hear a pin drop. To playing Gruene Hall with Guy Clark a few years before he died. To the first festival stage I was on at Glastonbury a few years back. Even to some incredible house concerts and small clubs. But that first time, it’s still so present to me, that I think that’s my favorite memory because it was when I first felt that I knew something true about myself.

Fascinating question. I don’t hide. I bring me into all the he’s and she’s and they’s and you’s in my song. If I don’t understand the characters’ passion, their desire, I can’t write it. So there’s got to be some autobiography in there, even if it’s masked by someone else’s story, even if it just creeps through two words in a bridge.

If I only wrote about my life and what was going on with me, literally, well, I’d have a short catalogue of songs because my life isn’t that interesting to sustain a career of writing about it. I don’t have time to hike the Himalayas or to be the captain of a ship. I’ve got a 16-month-old and an album coming out and I’ve got to get posters out and keep up with FaceTwittInstaHell. I’m tired. All the time.

Plus I have songs that need to get out and I have literally only the 30 minutes when my son may be napping to get a chorus idea down. So I have to find stories in newspapers or thieve parts of conversations I overhear or steal what you say that rhymes that you don’t even hear the rhyme. I’m always listening for ‘language of lyric’ to show up in my life and then, if I’m lucky and I can catch it, I keep it in a notebook for those naptime writing sessions.

So I may not let on that the “you” is actually “me” but it’s always a little bit of me.