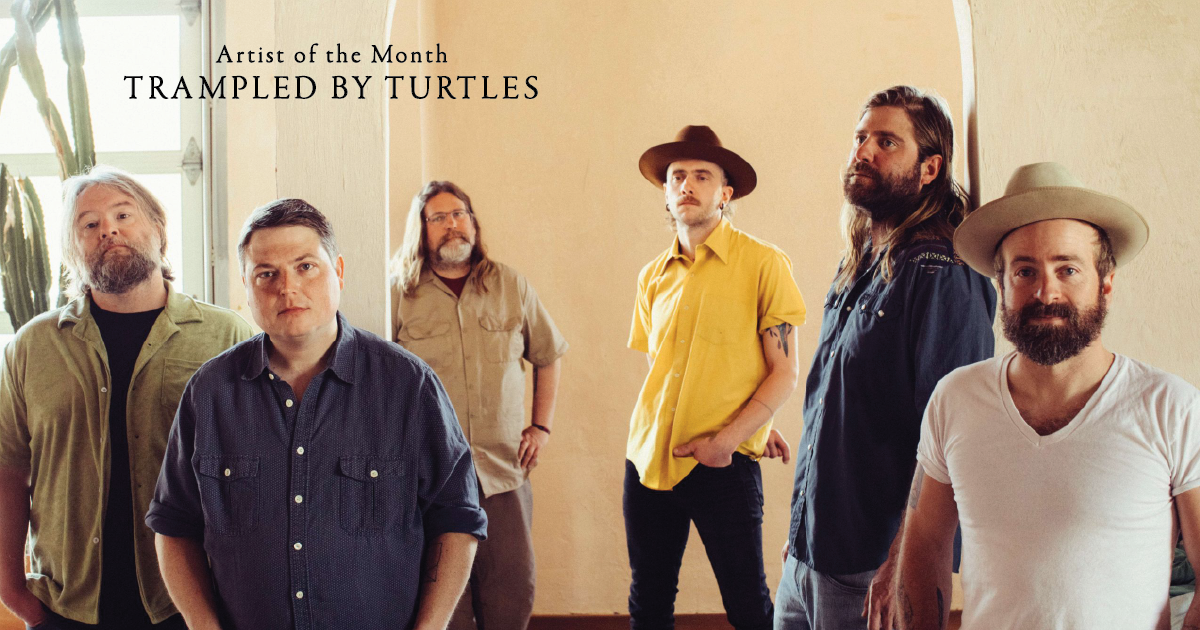 It was conceived and written during the pandemic, yet Dave Simonett is leery of tethering Trampled by Turtles’ new album Alpenglow to the lockdown. “Fucking COVID record,” he snorts when he wanders into that territory in answering a question about its inspiration.

“I won’t say that the changes in the songwriting have to do with that in particular,” he clarifies. “But I do think it gave me and all of us a real long time to look at everything. I haven’t been home that long in my adult life. It was weird and awful and wonderful and a unique experience that we all went through. It gave me a chance to look inward and to look forward too, into a new and unknown landscape.”

Perhaps that’s why many of the characters that populate Alpenglow are on the precipice of some major change, whether of their own volition or because it’s forced on them. They move to new locations, endure breakups, and generally confront the unknown with eloquent self-awareness.

“I know several groups where certain members didn’t come back. They were like, ‘I love being home and this is way healthier for me,’” Simonett recalls. “I think that all of us who were out of work for a while had that space to make sure we were still on the path we wanted to be on. I realized that I am. But I did some other work. I’ve done a lot of carpentry and construction, and I did some work with a guy I know who runs a remodeling company and it was a blast. And there was a part of me that was like, ‘Maybe I’d like to do this for a while.’ But I did some long hard thinking and decided that the life of music, well, the nightlife ain’t a good life, but it’s my life.”

The album title refers to the reddish and pink glow seen on mountains in the moments just before sunset and sunrise, and TBT’s delicate acoustic interplay perfectly captures the awe of that visual. The six members of the band (Simonett on vocals and guitar, Tim Saxhaug on bass, Dave Carroll on banjo, Erik Berry on mandolin, Ryan Young on fiddle, and Eamonn McLain on cello) each deliver instrumental virtuosity that’s never overdone and always in service of the song.

“Our band is going to turn 20 next year,” Simonett explains. “We’ve had a lot of time together to go through our phases. And I’m sure we’ll continue to do that. We’ve had time to settle in, I guess. We don’t really do a lot of planning before we go into the studio. I’ll show up with the songs and we’ll all learn them together. Sometimes there is a little conversation about ‘Hey, how do we want to approach this session?’ But a lot of that stuff, even if we’re saying it, goes by the wayside once we get in there. It becomes its own beast as we’re making it.”

To tame this new “beast,” Trampled by Turtles reached out to Wilco auteur Jeff Tweedy about producing Alpenglow. They decamped to his Chicago studios with a bit of trepidation about what would transpire.

“It’s an interesting thing going into the studio with somebody,” Simonett admits. “There’s always a feeling before you get there, like, God, I hope this works. If that recording time doesn’t work out, it’s about another year before we got that time on the calendar again. That’s one thing. Another part of it is I’m really excited to work with this person, but I hope we like each other.”

Tweedy quickly put those thoughts to rest when the band counted in “It’s So Hard to Hold On,” which opens the album and features a daring crescendo that mirrors the urgency of the lyrics. It was a song the band had already worked out on their own, or so they thought.

“We were all gung-ho to record that first and we were very happy with it,” Simonett remembers. “By the time Jeff got done with it, it was probably about half the length, and he moved some stuff around and put in that build-up. It’s so funny, you have something you think is done, and then you find out that it could be so much better. He even helped add a couple vocal lines into parts where there was space that he thought could just use something there. That was the first song we recorded, so that was our first time working through a song with Tweedy. It was not at all how I imagined it, but I really liked it better than I had it before.”

He continues, “Almost every song got rearranged in some way by Jeff, vamping on ideas. Sound-wise, that studio is just super cool. We just sat in a circle and played and sang everything live, which Jeff was cool with. He came out and played guitar when he felt like it. It was very casual. It felt like we weren’t even recording. The best way that we can present ourselves is that way, and that whole overall vibe was set up by Jeff.”

Tweedy also encouraged Simonett to do some rewriting. Rather than take offense, Simonett embraced the suggestions. “I felt like I really needed it once we started doing it,” he says. “Anybody that writes, you look at yourself and find yourself falling back on familiar turf. He helped take these songs apart and find different and maybe more interesting ways to put them back together. It was a fun process. I learned a lot from it actually, about kind of doing that on my own and just never settling for something being done until you explore a lot of options with it.”

Simonett rose to the occasion, crafting what may be his strongest set of songs yet. He generally eschews point-to-point narratives, instead allowing old memories, observed details, and bits of world-weary wisdom to do the work. “I’ve never been able to write a good song like that, A to B,” he says. “I’m sitting next to my dog right now, and if I wanted to write a song about my dog, I don’t think I could do it in a linear way. Some people are so great at that, but I guess it’s just not the way my brain works. I’m a little more scattered. It’s all right, and I’ve come to terms with that.”

Simonett and the band made a point of orienting listeners with stirring choruses throughout Alpenglow, choruses usually lifted to the rafters by their homespun harmonies. “Don’t let go,” he begs on the rollicking ode to wanderlust “Starting Over.” Later he implores his lover to “Climb out” with him on “Quitting Is Easy.” By the final strains of “The Party’s Over,” a gloriously sad waltz featuring Simonett’s killer parting shot “The party’s over/And I’m left here thinking/Of the dogs and the moonlight and you,” you’re left with the impression of a band operating at a potent peak. You’d never know just how close Trampled by Turtles came to imploding, before the forced break inspired a fresh approach.

“The older we get, the more breathing room we need,” Simonett muses. “Because we have families, and there are other parts of the garden that need gardening, it’s really important for all of us to keep that balance alive. It’s easy to get carried away with touring. We’re very fortunate that there is no shortage of gigs. But we get in these rhythms where it becomes a lot, and then all of a sudden, you step away from it, and say, ‘Man, that was exhausting. I can use a little time off.’ I feel like we’ve come back at it with a different perspective. We are playing less and being a little bit more conscious about why and where we’re playing. All of that has resulted in us having a really good time playing music. I’ve become thankful for that part of the experience.”

No, Alpenglow isn’t a COVID record, but it may be the most thematic in the Trampled by Turtles discography. “There was a lot more conscious effort into putting these songs into an album. Even leaving some songs out, because they didn’t feel like they fit into it as an album,” Simonett says. “As far as my role in the band in making the record, I feel like it’s the most effort I’ve put into making it seem like a cohesive piece of work.”

Could that mean Simonett and company will go even further next time and give us a TBT concept album?