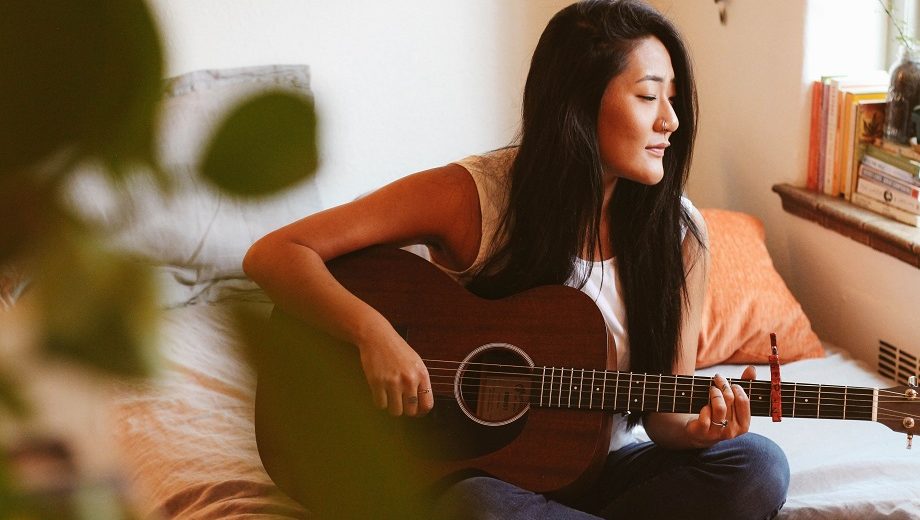 I’m not sure if I can think of one specific memory (there are so many!) But it’s always the best feeling whenever I can walk on stage, let go of expectation and allow myself to be fully present. It’s so easy to get caught up in our heads, always overthinking and putting pressure on the way we think things should go. Being able to find that space where I can trust that the hard work has been done, and then make the conscious choice to let everything else go and enjoy my time on stage is such a beautiful gift. Those performances always solidify why I’m pursuing this path.

I’ve been in the process of writing a song about my birth mother for a little over two years now. I have two tunes — one from my perspective and one from the perspective of my mother. I was adopted when I was four months old from South Korea and for so much of my life it has felt mostly unfathomable to imagine coming from people who look like me, who share my blood and my heart. As I’ve gotten older, the desire and yearning to feel more connected to my ancestry and my roots has gotten stronger. I find myself either feeling so many intense emotions about it all of it or the exact opposite — distant and unable to really comprehend that part of my life. I think that’s what makes writing these songs so difficult.

I always enjoy pampering myself and spending some quality time alone. Hot water with lemon and honey, yoga, and a long, hot shower are always a must on the day of a show. I’ve struggled with getting caught up by the high energy of a performance, ungrounded by all of the extroverted energy and the little things that can come up on the performance day. I find that a bit of meditation and silence always puts me in a good head space! Also a shot of tequila can sometimes do the trick, haha.

Opera taught me that the moment you walk onto the stage, you are your character. And you’ve probably spent countless hours off-stage channeling that energy and perfecting the role. What I loved most about that practice was finding ways to connect with my character, whether it was a major role or a small part in the chorus. Taking from my own life events and then using that to deepen the relationship with the role always made the process that much more exciting.

When I first got into the bluegrass scene, I think I took people a little off guard by how much I “performed.” So many facial expressions, lots of hand dancing (look up any video of me and you’ll understand what I’m talking about). I remember being really insecure that maybe people thought I wasn’t being very genuine, but I think that theatrical side has always felt like the most honest me. Most of my tunes are about real life experiences, so I feel like I rarely hide behind a character but rather, just allow myself to let that dramatic side come out and hopefully convey to my audience how deeply I feel about these songs.

I was in fourth grade and was performing at Carnegie Hall with a group called the MSU Children’s Choir. The experience was unlike anything I had ever been a part of. I remember being on stage, looking out into this beautiful hall, being surrounded by hundreds of other kiddos singing out. There really is nothing like singing with a giant group of people! My little 10-year-old self was freaking out and my heart felt so darn full. At the time, I wasn’t thinking, “I really want to be a professional folk singer!” Haha…but the thought, “I want to do this for the rest of my life” resonated with every part of my being.