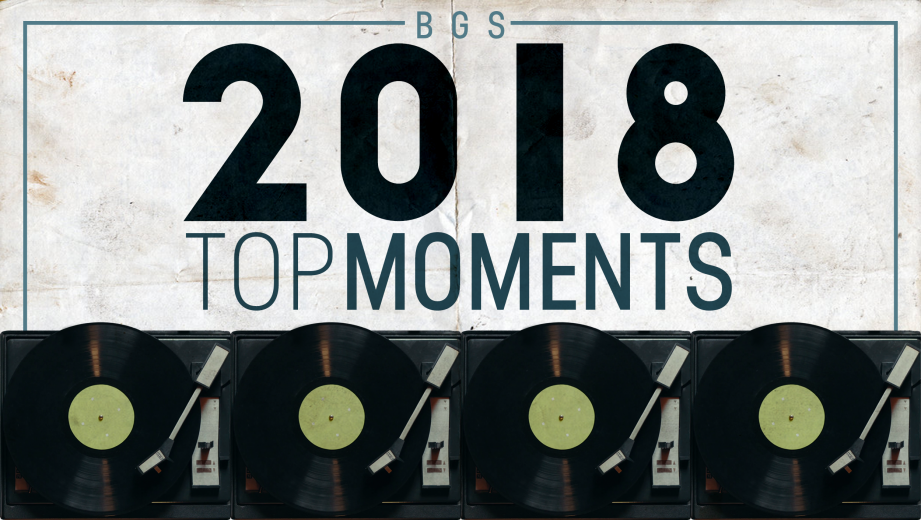 Ah, to truly live in the moment. These past twelve months often felt like myriad moments were perpetually fighting for our attention all at the same… moment. So at those junctures that did allow — or perhaps they mandated or beseeched or coaxed or compelled — us to take pause and truly be present, we found some of our favorite musical landmarks of the year, each one unified by their arresting message: Stop. Inhabit this moment. You’ll be glad you did.

Mandy Barnett Refreshes “The Fool”
A versatile vocalist who’s mostly known in classic country circles, Mandy Barnett made her newest album in Muscle Shoals, trading out the Nashville Sound for a slow-burn vibe that works particularly well on “The Fool.” This cool Lee Hazlewood/Naomi Ford tune has been kicking around since the late ‘50s when Sanford Clark gave it a rockabilly whirl. Since then it’s been covered by stylists such as Don Gibson, Robert Gordon with Link Ray, Elvis Presley, and Mac Wiseman – and like these guys, Barnett’s persuasive phrasing gives a sizzling guitar riff a run for its money. — Craig Shelburne

After decades upon decades of structural and systemic discrimination against LGBTQ+ service members in the U.S. armed forces, it might surprise one to encounter a queer, progressive singer-songwriter like Mary Gauthier releasing such a project as Rifles & Rosary Beads — an album populated entirely by songs crafted and co-written by military veterans and Gauthier herself. These songs are as harrowing as they are illuminating. And heartbreaking. And devastating. The beautiful, raw humanity exposed herein was captured simply by sitting across from another human being, no matter who they may be, and allowing oneself to see the other, and be seen. “The way I know how to create empathy is through song,” Gauthier describes in our Shout & Shine Q&A from early 2018. “Not preachy songs, not songs that tell people what to think, but songs that tell the story of what people are going through, so that we can see inside and know how they feel.” Clearly, Gauthier’s own life experiences — and the empathy (or, at times, lack thereof) she has experienced throughout — have enabled her to be a voice and a vessel for the tantamount importance of these soldiers, these stories, and these songs. — Justin Hiltner

Dead Horses Give “Turntable” a Surprising Spin
During this year’s AmericanaFest, I opted to go see only the bands I’d never heard of. Fortunately for me, that included Dead Horses, a Wisconsin band that caught me off-guard with their striking vocal blend and deep songwriting. Sarah Vos interprets a tumultuous upbringing in a way that even a stranger can relate to. At her side is upright bass player Daniel Wolff, propelling the set along with a steady beat. One of their standout songs, “Turntable,” already had millions of spins on Spotify, but it still felt like a discovery to me. That night also served as a polite reminder to check out the newcomers, because you never know. — Craig Shelburne

Bobbie Gentry Bridges the Generations
Bobbie Gentry’s entire catalog — eight albums in just four years — was remastered and repackaged in what may be the best reissue of 2018. The Girl from Chickasaw County spans 1967 breakthrough Ode to Billie Joe to her 1971 swan song Patchwork, each album transporting you to the fondly remembered South of Gentry’s childhood. She doesn’t just sing about growing up in rural Mississippi; she makes music that conjures up the people and the place, the humidity and the fried food, the mosquitos and the music. It’s a sprawling that presents her as a true visionary, one who used pop and country music to craft a world of her own even when the real world — and the music industry in particular — didn’t know what to do with her. — Stephen Deusner

Hawktail Goes With the Flow
It was a strong year for instrumental string band music, with projects as daring as The Hit Points (see below), which arranged classic video game music for a bluegrass ensemble, and as intimate as Simon Chrisman and Wes Corbett’s banjo/dulcimer music. But nobody brought more of today’s top talent and compositional intelligence together than Hawktail. Established as a trio with fiddler Brittany Haas, guitarist Jordan Tice, and bassist Paul Kowert, the friends brought in mandolinist Dominick Leslie to round out both the rhythmic structure and the improvisational daring of the band. The all-original album, Unless, is more about a flowing ensemble sound than a jam showcase, but the picking is state of the art. Recorded in the grandeur of Nashville’s historic Downtown Presbyterian Church, the album meditates and celebrates in equal measure. — Craig Havighurst

The Hit Points Get in the Game
The Hit Points, an ensemble of like-minded bluegrass virtuosos and video game music nerds, built themselves an album concept that, despite possibly being the most counter-intuitive vision for a record, ended up not only being aurally, aesthetically, and mentally astounding, it actually just works. Flawlessly. Fiddler Eli Bishop and banjoist Matt Menefee assembled a group of friends that would be up for the sometimes mind-numbing task of translating video game music from across the eras and consoles into bits and pieces and parts playable by a bluegrass band, bringing in bassist Royal Masat, mandolinist Sierra Hull, and engineer/guitarist Jake Stargel, among others, to deliver us a perfect nostalgia mash-up of bluegrass’ fiery, impeccable picking with the most iconic and familiar video game themes of the past couple of decades. Against the odds and intuition, it’s a truly stunning testament to the beautiful nerdy minds of bluegrass pickers and their common belief that there is no such thing as “biting off more than one can chew.” — Justin Hiltner

Kathy Mattea Rediscovers Her Voice
For the last few years, Kathy Mattea felt worried that her singing voice had essentially abandoned her. However, with medical guidance and patience, her warm alto returned. And it’s worth a nod to Pretty Bird producer Tim O’Brien, who knew how to make it shine. The folk-focused album offers beautiful songs like Dougie McLean’s “This Love Will Carry” and Mary Gauthier’s “Mercy Now,” while the Wood Brothers’ “Chocolate on My Tongue” brings a sweet perspective to looking for the meaning of life. Closing out the album, her reverential reading of Hazel & Alice’s “Pretty Bird” illuminates Mattea’s rediscovered voice with quiet power. –Craig Shelburne

Michigan Rattlers Deliver a Strong Debut
After hearing one track by Michigan Rattlers a year ago, I wondered when more music would be coming – because it gave me the same feeling as when I listened to Reckless Kelly and Turnpike Troubadours for the first time. This Midwestern band’s debut album, Evergreen, arrived in September, and proved to be a consistently compelling and well-written project. Guitarist Graham Young has just a hint of sadness in his voice, although Evergreen is by no means a sad record. With Adam Reed on upright bass and Christian Wilder on piano, the music falls somewhere between a bar band and a songwriter night, which is right where I live. Check out “Didn’t You Know” and “Baseball” for starters. — Craig Shelburne

Ricky Skaggs Shows ‘Em How It’s Done
A new member of the Bluegrass, Country, and National Fiddle Halls of Fame this year, Ricky Skaggs has been recovering from shoulder problems, but you wouldn’t know it from this fantastic performance — three songs performed with three bands, including his own Kentucky Thunder. Recapping a rich — and ongoing! — career, the medley featured several generations of musicians, from old band members like Bruce Bouton (pedal steel guitar) to guitar-picking country superstars (Keith Urban, Brad Paisley) to bluegrassers like Sierra Hull and teenaged fiddler Carson Peters. If the best lessons are taught by example rather than lecture, this one was a graduate level course. – Jon Weisberger

Chris Thile Establishes a New Radio Classic
It’s been two and a half years since mandolin virtuoso Chris Thile took the helm of the long-running public radio show A Prairie Home Companion. But it’s been a year since he fully made it his own, rechristening the program as Live From Here. In these twelve months, Thile’s show has become a powerhouse music showcase for acoustic music and far beyond: a place where St Vincent or Vulfpeck can play the same stage as I’m With Her, Brandi Carlile, and Jeff Tweedy. The host himself churns out a brand new song for each episode (an impressive feat in itself), and surrounds himself with a house band and writing staff that’s a who’s who of modern roots: Chris Eldridge, Sarah Jarosz, Joey Ryan, Brittany Haas, amongst others. It’s as if he’s been doing such a show forever, and something we can only hope will continue long into the future. –Amy Reitnouer Jacobs

Colter Wall Captures the Prairie Wilderness
Of course country music isn’t limited to the American South, but it’s been so well established in that specific locale it sometimes feels as if anything else needs an asterisk. Canadian singer-songwriter Colter Wall sets about erasing that mark with his sophomore album, Songs of the Plains. Telling tales about truck drivers, cowboys, and blue collar types at the mercy of automation, Wall uses traditional country influences to sing of his prairie homeland. Working with Nashville’s Dave Cobb, he blends an array of original songs and covers, each of which provides a formidable stage for his voice. Wall’s baritone growl feels like a barroom throwback, the kind of sound you stumble across at dusk when the jukebox finally falls silent and the guy keeping to himself in the corner finally opens his mouth. I put this on when I want to actually feel Canada’s vast prairie wilderness, and think about the ever-widening world of country music. — Amanda Wicks

The War and Treaty Share Their Love Story
In 2010 Tanya Blount and Michael Trotter fell in love after performing, separately, at a Maryland event known as, yes, the Love Festival. In 2018 many fell in love with the Michigan-based duo, now known as the War and Treaty, with the release of their Buddy Miller-produced debut album, The Healing Tide, and even more so from their concerts. Their boundless joy alone is irresistible, but the songs and performances are elevating. “I’m singing with my wife, songs I wrote for us, and we’re on the road helping bridge humanity in our way,” Michael said in an August BGS profile, Tanya adding, “This project is an act of love.” – Steve Hochman