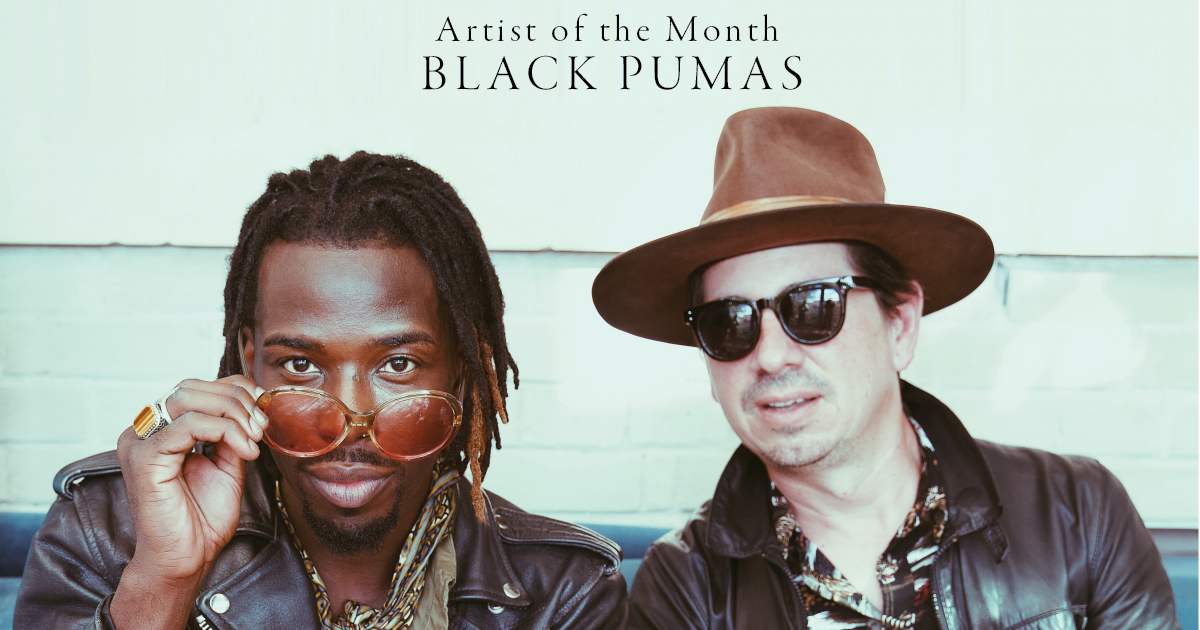 About four years ago in Austin, Texas, Eric Burton and Adrian Quesada were recommended to one another through a mutual friend — someone who could imagine the inevitable magic of pairing Burton’s magnificent singing to Quesada’s cool, pulsating productions. Although these two musicians didn’t know each other, they somehow needed each other. As a songwriter inspired by folk music and soul music alike, Burton sought a vehicle to carry him from busking to the bigger stage, while Quesada — already a Grammy winner for his work with Grupo Fantasma — sought that voice to flesh out the instrumental tracks he’d crafted in his studio, Electric Deluxe Recorders.

Nobody could accuse them of rushing it, as phone calls turned into studio collaborations, and ultimately a few gigs at the South Austin venue, C-Boy’s, just to show their friends what they were working on. However, once the secret was out, the lines to see them perform stretched around the block and Black Pumas promptly landed a recording contract, with a self-titled debut album landing in 2019. Since then, their partnership has led to four Grammy nominations, a trophy for Emerging Act of the Year from the Americana Music Association, an invitation to perform a song for the Biden-Harris inauguration, and even a Super Bowl commercial. In conversation, they are quick to credit each other with the sonic touches that have turned this intriguing duo into an international draw.

For the first part of our two-part Artist of the Month interview with Black Pumas, Burton and Quesada chatted with BGS about the roots of “Colors,” their first show together, and what the Austin music community is really like.

BGS: Finding the acoustic version of “Colors” was such a nice surprise. What kind of vibe were you going for when you recorded that version?

Eric: I think that the first time Adrian heard “Colors” was when I brought the guitar to the studio. I had been trying to record that song with different engineers and producers, and a lot of my friends would reflect that, “Man, the acoustic version has always been my favorite!” When I finally met Adrian, who was equally moved by the song, we were able to not necessarily think about it, really. Adrian started with a palette of sound that went hand in hand with the way that I write music as well. We just did it together and it came out how it did. We have amazing band members and we were able to just press record and do the thing.

Adrian: We recorded quite a few acoustic things, and as much as “Colors” is a Black Pumas performance, at the core it’s something that Eric wrote on acoustic guitar. So whenever you get to hear it like that, it’s more from the source.

I love the acoustic version of “Fast Car,” too. What was going through your mind when you heard that on playback for the first time?

Eric: You know, any time I play that song, a tear comes to my eye because it is one of a few covers that I knew when I was busking. It was a song that would move people to stick around, or tip, or want to engage after the song. So, it was an interesting feeling listening back to that song as a Black Puma, with Adrian Quesada, because I could feel how far I’d come from busking on the Santa Monica Pier to recording at Electric Deluxe.

Is there a lyric in that song that still tugs at your heart when you sing it?

Eric: The lyric that I really attach to is “You’ve got a fast car and I want a ticket to anywhere.” The first lyric is one of the most powerful lyrics. It sets the emotional canvas for the rest of the song. It’s just reflective of the strong desire in many people who start off in the troubadour style of playing and performing, a presentation to passersby.

Adrian, how did you approach that session, being a classic song that everybody knows?

Adrian: Oh man, I just tried to stay out of the way, honestly. Eric’s played it for so long and so well. We were going to work up an arrangement for the band to start playing it at our shows, but we didn’t get it together in time, so he just did it himself as an encore one night. All of us were watching from the side of the stage. It was like, man, why would we try to reinvent the wheel? I just try to complement the song, and the way that Eric emotes it is something that doesn’t need a lot. You don’t need to overthink it.

I love the falsetto on songs like “OCT 33.” It’s effective because you don’t use it all the time. Did you have to figure that out naturally? Or was there ever a conversation like, “Whoa, too much falsetto”? Or, “I think we need more”?

Eric: Honestly I come from playing folk music. I love Neil Young and Bob Dylan and dig on the Beatles — so when I first started playing music, I was playing acoustic folk soul music. When I got Adrian some tracks, I was living with a roommate and he was saying, “Hey man, I think you’re singing a little bit soft on these songs.” I said, “What do you mean?” And he’s like, “Just go back and listen to Wilson Pickett and Marvin Gaye and Otis Redding,” and when I did that, I was able to kind of integrate the way Marvin Gaye did that head voice, like, “Oooh!” That’s kind of his move. So, I was able to borrow some of the razor-sharp vocal sounds that you hear in these individuals to make some better paints for the canvas that was Adrian’s awesome production.

Adrian, you have a great vocal range to work with. What is that like for you as a producer, knowing you could take these arrangements anywhere?

Adrian: Yeah, I’m a big fan of the falsetto, but I was digging everything he was throwing out. So, when he goes falsetto, I go for it. When it’s not falsetto, unless I feel like it doesn’t work, I just let Eric’s instincts guide him, and what he feels like singing.

What do you remember about the first show you played together?

Eric: It was amazing, right? It was rad.

Adrian: We didn’t even rehearse a lot. We threw it together in a couple of days and we didn’t know what we were getting into. I remember thinking, like, “All right, this should be fun. Worst case scenario, we could drink some liquid courage before the show and have fun. But it completely surpassed my expectations and it was a blast, man. Those early shows we did at C-Boys still live in my memory as some of the best times.

Why did C-Boys seem like a good place to kick this off?

Adrian: It feels like a cool, downhome, neighborhood bar that has amazing music. Steve Wertheimer, who’s the owner, really believed in myself and Eric early on. It’s a competitive town for live music and he’s always been a huge supporter. We just sent him a song and he dug it, and gave us a residency. It was pretty amazing that he took a chance on it. Eric did a solo residency for a while at one of his other venues. He was always a big supporter.

Tell me what you mean when you say that the Austin music scene is competitive.

Adrian: I would say “competitive” in the way that there’s a lot of talented people, but not “competitive” in a way that’s cutthroat, you know what I mean? I feel like there’s a good support system, where everybody’s supportive of people. It’s not competitive in that way. It’s like, you better bring something to the table because there are a lot of people that play and are very talented.

So when this was all happening, were you thinking of a record deal and management and all that? Or was it more about just getting together to play?

Eric: I think we were just both stoked to get on a stage. At that point, we had spent a few months together in the studio. Adrian presented some instrumentals that he was working on, for me to then write songs over. And then I was introducing myself to Adrian through my songwriting and sharing some of the music that I came up with, for him to arrange around. We were having so much fun that we were saying, “Well, we should take this to the stage, just to see what our friends think about it. I don’t think either of us invited too many people to the show, or promoted it, or anything big like that. We were just curious about how it would go over with the people that we know.

Adrian: We just played and we weren’t thinking industry. We were just going to have fun. Originally we thought we would maybe play for a month or two. We didn’t have a big plan other than to play music. We didn’t think that far into the future. We thought, “We’ll do this until it’s not fun.” There wasn’t a detailed, long-term plan for anything. One thing was just leading to another.

Editor’s Note: Read the second half of our interview with Black Pumas here.