From Homemade Tapes to Hip Hop, Black Pumas Share Their Influences (2 of 2) 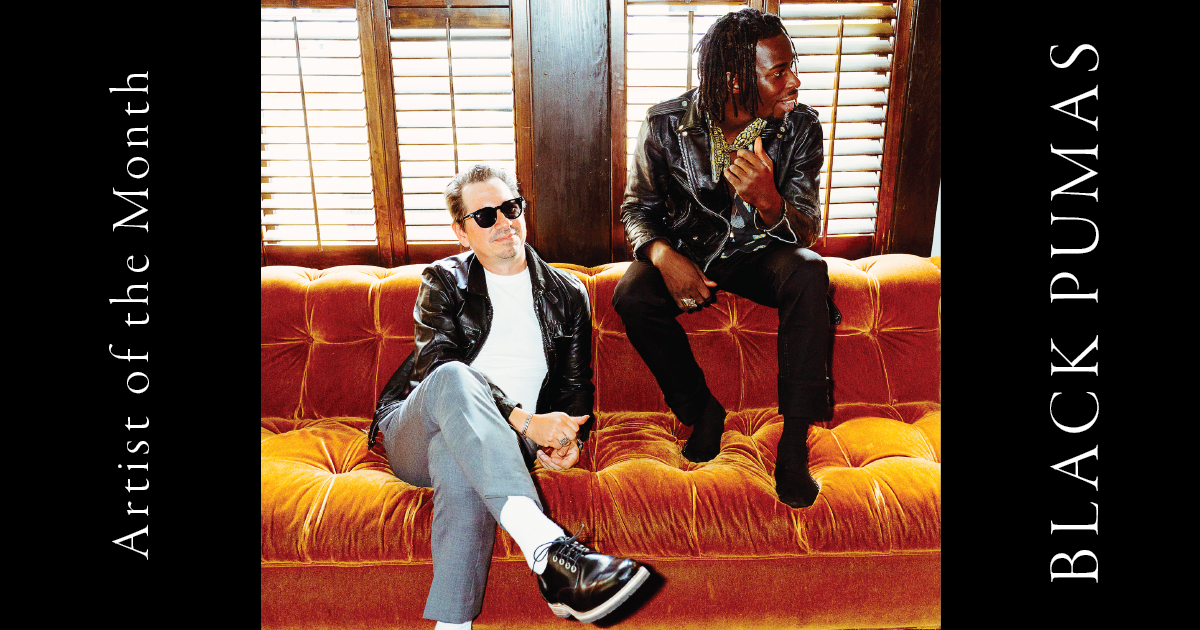 Heading into the Grammy Awards this year, Black Pumas are competing for three trophies, two of them in high-profile categories. Their breakout single, “Colors,” is up for Record of the Year, while Black Pumas (Deluxe Edition) will vie for Album of the Year. Their third nod, with “Colors” in the Best American Roots Performance category, reflects the duo’s affinity for soul and folk music, as well as the way they blend genres without losing the groove or the message. The recognition also follows their 2020 win from the Americana Music Association as Emerging Act of the Year.

From their home base in Austin, Texas, Black Pumas’ Eric Burton and Adrian Quesada caught up with BGS by phone, speaking about the music that shaped them, trusting their instincts, and the message they’d like to send out in 2021.

Editor’s Note: Read part one of our Artist of the Month interview with Black Pumas.

BGS: One of my favorite songs on this album is “Fire.” To me, it has a message of encouragement. What sparked the idea to write that song?

Eric: “Fire” was one of the tracks that Adrian first sent me. Adrian has such a brilliant way of making music that feels almost visual and vivid, almost cinematic, so when I got it, I couldn’t help but be moved to allow the song to inspire lyrics. At the time I was living with a girlfriend who was going through some health issues. She had an autoimmune deficiency and I was encouraging her to call on me. That you don’t have to feel like you’re overbearing or too much was the message that I made universal on the song “Fire.”

And lastly, with that song specifically, the funny thing was, before this I had never sung to another man on the phone. But this was one of the first songs that I was inspired to write lyrics to. When I get an idea, I like to show my friends almost right away. I called Adrian right away, not even meeting him yet. I called him and I said, “Hey, man, check this out!” I turned the song up and I started singing the melody and a few lyrics here and there, showing where it was moving, so I could integrate the space. It was really interesting to show Adrian that, and I was glad we were able to finalize the idea.

Adrian, what was going through your mind when you heard Eric sing in person, in the same room at the same time?

Adrian: Goosebumps. Trying to play it cool and not get too excited. I tried to play it off, but yeah, I knew that it was going to be a special thing, but I hadn’t heard it in the room. There was obviously a spark there, so it was just a matter of containing my enthusiasm and not getting too ahead of anything — until I finally broke down and said, “All right, man, we have to play this stuff live. Are you into doing that?” And he was like, “Yeah, let’s do it.”

It seems like you guys are in tune with your instincts. How important has that been to the success of Black Pumas?

Eric: It’s hard to put too much pressure on ourselves regarding what others are going to think about us. As opposed to trusting how easy it is to know what moves you first. It’s much more of an easygoing experience making music if you’re doing it to move yourself, knowing that what moves you has a really good chance of moving someone else. As Adrian mentioned earlier, when we started making music together, it was to have fun. We really dug what we were doing and we just kept doing it, and it turned into what it is now. Regardless if anyone was listening to the music or not, we would probably be making music every other week or so, because we enjoy doing it together. Hopefully like what we having coming up next, but if not, I think we’ll still be making music. It won’t crush it.

Adrian, who are some of your favorite guitarists?

Adrian: I personally have gravitated more toward rhythm players, and the finesse and nuance that goes into something like that. Recently I’ve been getting into Cornell Dupree, who played on thousands of recording sessions. He was in Aretha Franklin’s band for a long time and played with Donnie Hathaway and all the classic soul recordings. He’s an unsung hero of the instrument, and of the genre, too, because he didn’t always get all the shine. I don’t know if you saw that Aretha movie, Amazing Grace, from a few years ago that finally saw the light of day. I saw him playing on there and it was like, “Oh, man!” He never got that much attention, but I just started going down the rabbit hole of looking up YouTube videos.

Eric, I read that you grew up listening almost exclusively to gospel music. Is that right?

Eric: Not necessarily. My family comes from the church, and my grandparents were missionaries, so it was part of what was around, but for the most part, my family are also very artistic – musicians and writers. I would listen to my uncle write songs. He would pull out tubs and tubs of little tapes, and I would pop in one of his tapes once in a while and listen to his songwriting process. As a young kid, that was one of my toys, if you will. That’s pretty much how I learned to write music, listening to an uncle who had a really heavy hand in raising me, bringing me up, especially as an artist. For the most part, I would either hear whatever was on the radio in California, but most intimately it was through my uncle’s songmanship and his songwriting.

Adrian, who did you grow up listening to?

Adrian: I grew up listening to whatever was on MTV. I was really influenced by that. I was an only child and I was home by myself a lot. I grew up in South Texas and didn’t have a lot of places to get music from. So, when I discovered MTV, it turned me on to a lot of stuff, everything from hair rock bands to Nirvana and that whole sound. But the one thing I was really into, that had the biggest influence, is hip hop music, which I discovered through one of my neighbors who would always be playing stuff outside when they would be playing basketball. … I don’t know exactly what it was about the sound of hip-hop, but as I discovered the source of a lot of it, there was jazz and soul and funk at its core. And later on, I started getting into that music. I realized there was *that* underneath, hiding there for me to discover.

Looking ahead, what would be the best-case scenario for you in 2021? What would you hope that this year brings for you?

Eric: That we get to continue to create time and space to do exactly what we really love to do, which is to create music. We’re very fortunate that we’re seeing the opportunities we’re seeing now because people are buying the music and supporting us. Individually I look forward to creating more with Adrian, one, and also I just bought a house so I look forward creating somewhat of a studio set-up to can get into production myself.

Adrian: Yeah, I’ll second that — just the opportunity to put some new music to tape and get some out this year.

Eric: Lastly, I’ll speak for both of us briefly and say thank you [to our fans]. Thank you so much for listening to our music, for supporting us. We miss you guys, we love you guys. You guys fuel our passion and we look forward to continuing to be honest in the studio, together, that we may take what comes from our heart to allow it to move you guys’ heart.