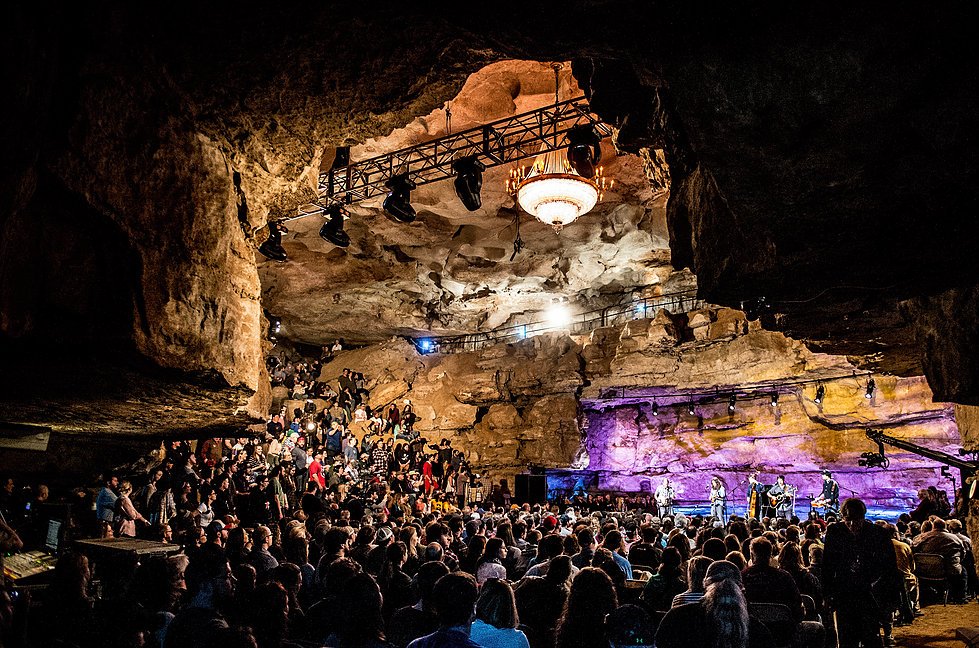 If you’re a fan of bluegrass, PBS, or both, there’s a good chance you’ve seen the Emmy-winning show Bluegrass Underground. The series, which features the biggest voices in roots music performing in an actual cave, has been on the air since 2011, with shows first taking place 333 feet below the earth in McMinville, Tennessee’s Cumberland Caverns in 2008. Since the show’s inception, it’s featured a who’s-who of bluegrass and Americana’s finest artists, including Old Crow Medicine Show, Del McCoury, and Lucinda Williams.

New episodes for the 2017 season taped over the weekend with three days of shows that featured Conor Oberst, Parker Millsap, Rhonda Vincent, and Marty Stuart, among others. This new season — the series’ seventh on television — is its biggest yet, a lineup that had Larry Nager, who serves as the show’s resident journalist and blogger, as excited as ever to get down to the cave.

Prior to getting involved with Bluegrass Underground, Nager worked as a journalist, musician, and bluegrass historian. His first brush with the series came in 2008, when he attended one of the very first shows — featuring the likes of Tim O’Brien, Bryan Sutton, and Stuart Duncan — at the behest of Bluegrass Underground founder Todd Mayo. He cites that lineup as inspiring him to join the show’s team, but also is quick to explain that the venue itself played a large role in getting him on board.

And it is quite a sight. After trekking down a dimly lit, winding path flanked by rock formations and crystalline pooled water, visitors descend upon a grand “room” made of rock, at once cozy and breathtaking, lit by a large chandelier that can only be described as prehistoric chic.

“There are artists who won’t go because they don’t like the idea of being in a cave,” he says. “That, in itself, is interesting. But there’s kind of a magic that happens underground. It takes everybody out of their usual zone. For bluegrass bands or any working band, it’s gig after gig after gig and they all kind of run together, but when they come down there they say, ‘This is one we’re gonna remember.’”

Though Nager has seen countless shows over the years, there are a handful of moments from his time in the cave that rank among his favorite musical memories. One of the most treasured of those memories is his experience seeing the late Dr. Ralph Stanley perform in 2011.

“Ralph did two shows down in the cave,” he says. “To get him in the cave is just a cool thing. He did ‘O Death’ with a pin-spot on his face in the dark cave. That was one of those moments … It was transcendent. That’s definitely one of the moments I’ll remember.”

Nager noted that moments like those are made available to viewers beyond the lucky few hundred in the venue by PBS, an entity threatened by budget proposals by the Trump administration. Without the support of PBS, there likely won’t be a home on television for Bluegrass Underground or similar roots-centric shows like Music City Roots.

“There really is a message there, in that PBS, for people who love roots music and love bluegrass … you’re not going to see it anywhere else, not on broadcast television. There’s also an underserved rural population that, the influence of PBS there, is not often stated, but for a lot of places that’s the alternative TV they get. Otherwise, it’s Dancing with the Stars.

“If you’re open to it, the beauty of it, the strangeness of it, the uniqueness of the experience is inspiring. It’s just old-fashioned magic.”