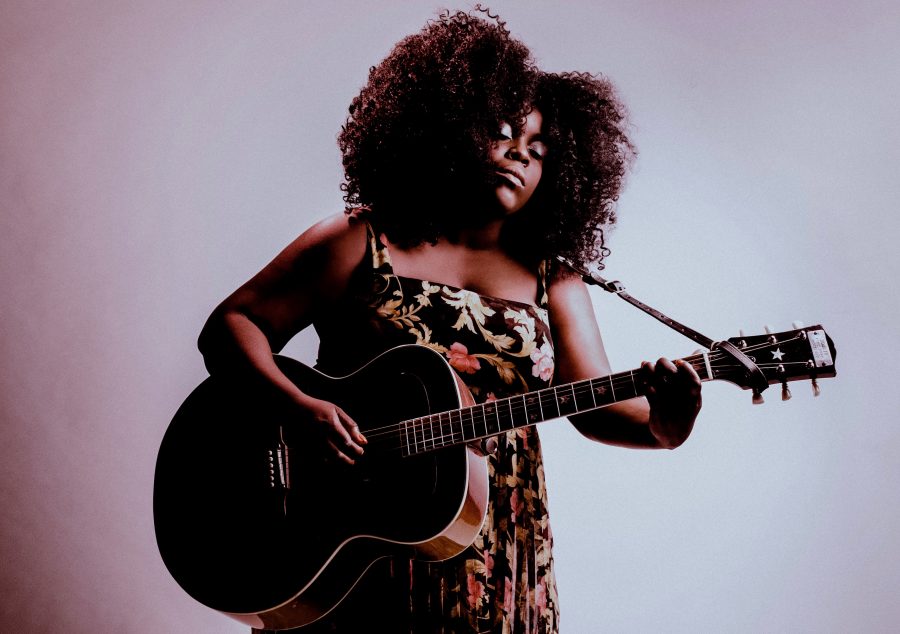 If you’ve ever had the good fortune of being in the audience for one of Yola’s live shows, you will have been utterly blown away not only by the power of the British singer/songwriter’s voice and the intensity of her songs’ arrangements, but also by the bedlam her audiences devolve into in the presence of such a commanding, charming, visibly strong black woman. Yola owns each of these unabashed facets of her identity with bright-eyed self-awareness and unbridled joy, all of which pour forth from her astonishing debut album, Walk Through Fire.

This grandiose power that Yola possesses is deliberately not the focal point of the album, though. She and her collaborator/producer Dan Auerbach have artfully balanced the wildness of Yola’s experiences in myriad genres (pop, electronic, and rock among them) with the subtlety and nuance that her deft songwriting demands. It’s not just an album sung by a “strong black woman,” it’s not just country-soul, it’s not just a late ’60s/early ’70s pop throwback, it’s not just a collection of heart-wrenching, impossibly visceral love songs — it’s effortlessly and masterfully all of the above.

We sat down with Yola during her release week press gambit in Nashville and began our conversation recapping this year’s Grammy Awards.

BGS: In one of her Grammy acceptance speeches this year Brandi Carlile called Americana  “An island of misfits.” I wonder if you agree — and what do you feel like you bring to this island of misfits?

Yola: I do agree. I think Brandi Carlile is on point by saying that. It feels as though people have congregated in Americana, maybe even running from other genres. It’s a place where we are celebrating eclecticism and being open and we’re at least seeking to be diverse — and trying to understand that diversity, instead of having fingers in the ears. There’s a little bit more to the scene. It allows people like Brandi Carlile to rise to the top, and rightfully so, because of their talent!

I have found, for me, that after being associated with a lot of different genres over the years, I’ve had to fight to just be me. I’ve had to do as much fighting in this particular scene, because everyone’s crossing something with something or being more unexpected than other genres. Doing shows at AmericanaFest and in this particular scene has given me a chance to develop. Full stop. And to get started.

I feel like the album is decidedly country-soul, and it’s interesting to me because we’re in this community — Americana with a capital A — that is majority-white.

We’re working on diversity, like you said, but we’re a work in progress. So I wonder how you feel your blackness is part of that country-soul designation and how much of that is not connected to your blackness, as well. I feel like so many people, especially in the audience for your shows, see you step up on stage and they’re ready to scream and holler because there’s a “strong black woman” presence on stage–

So I wonder do you feel a differentiation between what you’re establishing as country-soul for country-soul’s sake, and how much comes from your identity as a black woman?

Well, I think it starts with identity, because everything starts from within and from where you think you fit. Where do I fit? I think my entire musical journey has been based on where the frick I fit.

An island of misfits.

Yes, exactly. I found a bunch of weirdos that were as weird as I was and was like, “This is great!” [Laughs] That’s what has led me where I want to go, musically. It’s about finding what my voice wants to do. It’s all about the physicality of my voice, it’s got a soft side, almost choral, that then flips to this big, yelly, slightly more Tina [Turner] side. I can move very smoothly from one to the other. My voice is a seesaw in that situation. I need to be able to be the fullness of myself, so that’s kind of where the country-soul comes from — from within.

That’s at least physically what it is, as well as growing up listening to that music, listening to people who were already doing what I’m doing. I’m by no means inventing the wheel or even reinventing it, for that matter. It’s something that’s just been done. Ray Charles has done it. Mavis is doing it. Maybe the way I’m doing it, with this retro pop kind of angle, is something that others haven’t done, necessarily. But that is narrow in comparison to the vast eclecticism of my musical taste. It’s out of control how broad a day’s playlist can sound.

We’ve talked about this, because I want you to make a bluegrass record!

[Laughs] You’re like, “Are you ready to do that?” And I’m like, “Hey, I’ve got so many genres to get through right now!”

Just tack it on, you know? I don’t know if I’m going to go all the way like, Beck levels of breadth. He’s covered some ground, it’s impressive. But I’m enjoying this kind of freedom right now. As fun as it is knowing that country and soul are always going to come out, it’s nice to be able to be free enough to explore gospel and blues and rock and roll and pop. You can hear from the record there are probably four comfortable genres within it and they all move completely seamlessly from one to the next. That’s what I love about music. I love how close it all is.

Going back to the physicality of your voice for a moment, one of the things that struck me about the album is that it feels like you’re laying back–

Mmmm. You know me!

It feels like you’re being reserved, your signature Yola-dialed-up-to-eleven isn’t there all of the time. Talk me through that less-is-more decision making process.

Certainly, the songs kind of spoke for themselves. When you finish writing a song you can decide whether you’re going to tack a big ol’ outro on the end of it and then whether you’re going to freaking scream to the heights of the ceiling on that outro. But I thought, I don’t know whether I listen to albums where the singer is going hell-for-leather, top to bottom, all the way through. I like to listen to albums top to bottom and I like a bit of a gradient. So as the songs come, one by one, I kind of have a look and think, “Okay, I don’t think the song needs this.” It’s about trying to respect the song and the will of the song. Sometimes the song really needs it, like “It Ain’t Easier.” I’m going to go there! [Laughs] I was purposefully selective and I think it was each song that led me.

The songs do feel like they’re all related, but they’re all distinct. For instance, “Still Gone” and “Keep Me Here” back to back feel like the same story told from slightly different perspectives.

They are! “Still Gone,” in my mind is about being in a relationship. You met someone, they were amazing, then whoever the heck that person was, they fucked off and the person you end up with is your consolation prize. You’re looking over your shoulder thinking, “Oh, still gone!” It’s like chasing the dragon, but it’s the person you were dating. That first hit, that’s the one. Everything else after just pales in comparison. It’s very much that moment of realization, that moment before you start checking out of the new relationship, when you start staring off into the distance.

That faraway look in your eye!

That faraway look in your eye! It’s all tied together. That’s the precursor feeling. It’s the “You’re literally everywhere, but you’re not here” situation.

So “Keep Me Here” turns that same idea on its ear.

It does! Because you haven’t got the guts to be alone. You’re being a chicken. You’re being fed, again, chasing the dragon. Like, “That first hit was good, can’t we just have that bit?” No, you can’t. You have to have the full wonderful person — especially when they’re not wonderful, that’s challenging. You’re just hoping for those little moments, those little glimpses that keep you hooked in. In my situation, I was working with my ex, my partner at the time, and so it was very much like being totally hooked, and musically hooked, and socially hooked, and all of these hooks become something that keep you holding on in light of glaringly horrible interactions in every part of your life. I think it takes a lot of self esteem to grow up enough to realize you need to move on. The twenties are not really the time when self esteem is at its full!

It’s funny that we begin that “chasing the dragon” when we’re in our twenties when we have no idea what that thing actually is.

[Laughs] Exactly! We have no idea! But we’re just desperately going for the thing. It felt good that one time, maybe it will happen again. It’s about as well-advised as taking smack, you know? It shouldn’t be like a hit, though. It should be consistent. But you don’t learn about the healthy ways of doing life until you have the experience.