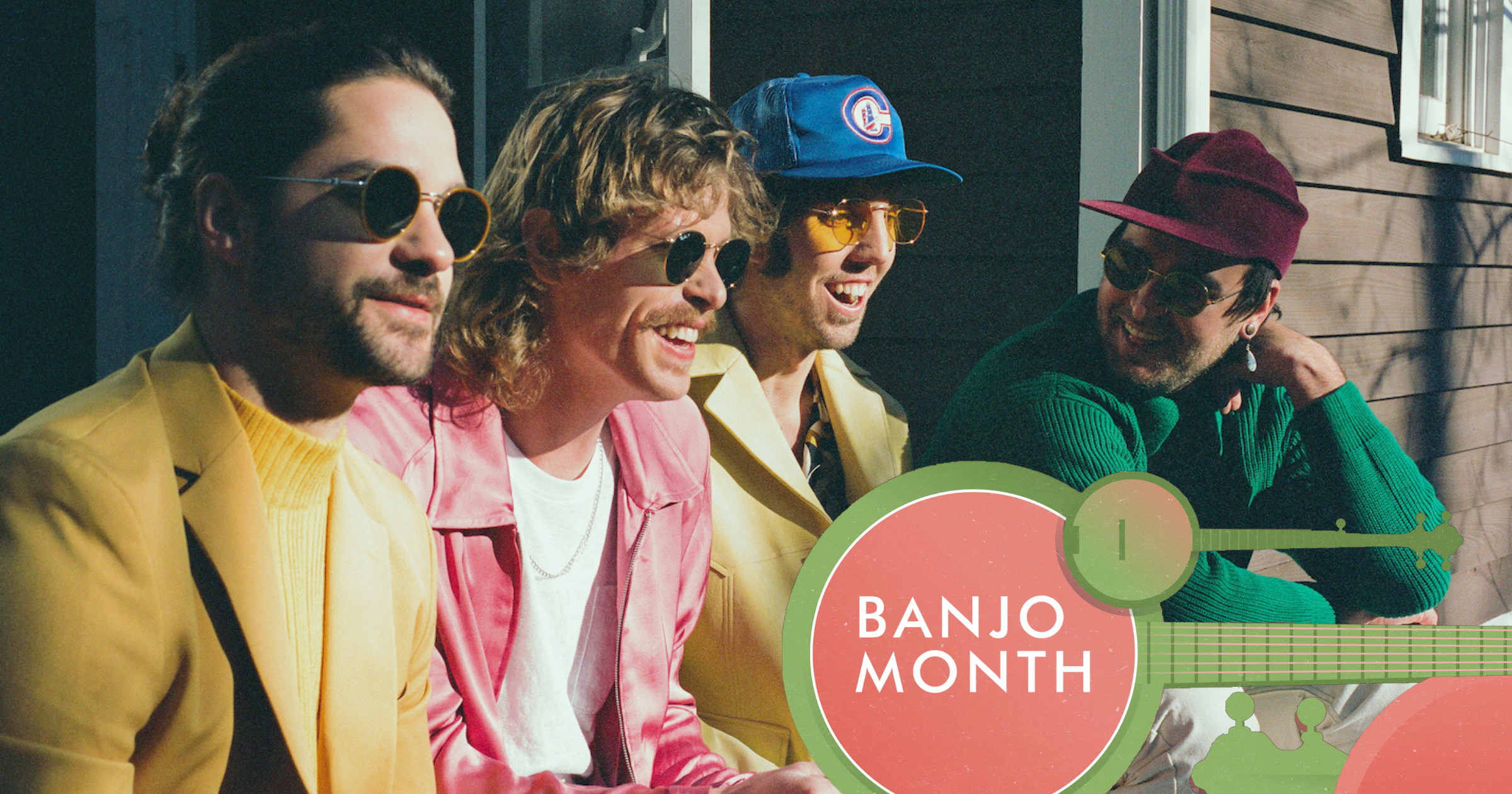 Evan Westfall, cofounder of the folk-pop-rock band Caamp, spends a lot of time explaining that he and bandmate Taylor Meier did not actually meet at summer camp, as commonly reported. The Columbus, Ohio, natives did attend the same camp, but they already knew each other beforehand. Which also refutes the met-in-high-school version of their origin story.

The pair did form a band in high school, but wound up as a harmonizing duo, with Westfall on guitar until Meier started playing as well. When Meier headed to Ohio University in Athens, Westfall began his banjo education. Eventually, he joined Meier in Athens, where they played open mics and coffee houses, and officially became Caamp.

In 2016, they released their self-titled debut album on Spotify — and were shocked when “Ohio,” a growing-up reminiscence merging Meier’s sand-strewn vocals and guitar with Westfall’s adroit banjo-picking and harmonies, leaped onto Spotify’s Viral 50-Global list. At that moment, where they met became a lot less relevant than where they were heading. Soon they had a manager, a touring schedule, and more songs racking up big Spotify numbers. Their second album, Boys (actually a double EP) followed in 2018. By the time By and By came out in 2019, they’d signed with eclectic indie label Mom + Pop Music and added Matt Vinson on bass, guitar and harmonies. Joe Kavelec, who played piano on that album, is now also an official Caamper. The By and By track “Peach Fuzz” became their first No. 1 single on Billboard‘s Adult Alternative Airplay chart.

Despite the Covid-induced interruption of their increasingly high-profile touring slots, they scored their second No. 1 on AAA chart in 2020 with “Officer of Love.” But during their down time, Meier also endured the painful losses of his romantic partner and his canine companion. Songwriting became his coping mechanism; Lavender Days is the result. Its lead single “Believe” simultaneously topped Billboard’s AAA chart and the Americana Radio singles chart. In addition, the band has sold out a two-night headlining stand at Colorado’s Red Rocks Amphitheatre in October.

Meier’s lyrics on Lavender Days express love’s quicksilver moments in phases, capturing both exuberant hope and painful aftermath with alluring melodies that swell and ebb like waves. But their phosphorescent glow comes straight from Westfall’s banjo. To conclude Banjo Month on BGS, we asked him to talk about his playing and its prominent role in the band’s sound.

BGS: Regarding the name … is it true that Caamp stands for “Consuming abnormal amounts of Maker’s (Mark) and PBR”?

Westfall: (Laughs.) That is the funniest thing to us. Someone told us that they read that on Wikipedia or something. We didn’t start that, and we don’t know who did. But that is the funniest shit to me. We’d never — I mean we do that, but that’s not self-proclaimed.

I thought that was hilarious, too. Does it actually stand for anything, or you just said, “Oh, what the heck, let’s make it different.”

When we started playing down in Athens, we were Camp with one a. We were working on the first album and made a really shitty first website. We were trying to post shows on there — this is before Instagram — and we were trying to tell our friends and family, like, “Check out our website; you can find our shows.” But no one could find us online with the one a. Taylor had the idea one day of adding a second a, because we liked the name Camp so much; it just fit what we were doing. But it’ll stand out a little more. So we did that, and it actually worked. People could find us and it popped right up online. But it’s not like an acronym or anything. At the time, there was just two of us. And Tay would be like, “There’s two of us, so two a’s, or it’s like two tipis.” It started as just a way to stand out, and we just found other ways of explaining it after that.

How did you discover the banjo?

The first time I ever picked up a banjo was probably 2013. At first, it was just to stand out and get people to remember us when we’d play open mics; we wanted people to go home and be like, “Who was that guitar-banjo duo?” There just wasn’t really anything around like that, where we’re from, at the time. That’s how Caamp started, around 2013 or ‘14.

When I picked up the banjo, I naturally started playing it like a guitar, with a flat pick. I knew what the banjo was, and like, Scruggs style; I knew those different ways of playing it. But the two songs that Taylor had, the first two Caamp songs, I was just pretty much trying to learn the chords to grasp how can I play along to this song? How can I make this work on the banjo? But I worked in my own rolls with a flat pick. I also really wanted to find my own voice on it. I didn’t want to sound like a Scruggs player.

The banjo is a fucking hard instrument to play. If you’re learning Scruggs or clawhammer, it’s tough. I know flatpicking can get looked down on by some of the old banjo-heads, but I didn’t really care about that. I just wanted to find my own voice and how can I play the way I’m playing and how can I pop out of the mix so somebody can point (out), “That’s Evan playing the banjo in this song. I can tell for these reasons.” That was my goal instantly when I picked it up. I fell in love with making it my own thing, trying to find my own way of playing it.

Was there a particular style or players that you found yourself drawn to?

I connected instantly with Dave Carroll of Trampled by Turtles. I didn’t even notice until only a few years ago that he plays with a flat pick, but I worshipped his playing. He was my first banjo hero because he was so melodic and so technical at the same time. When I found out he was a flatpicker, worlds collided for me. One of my favorite players of all time plays with a flat pick, which is really cool. One of my first bluegrass albums that I bought was (something) like, Ralph Stanley’s Greatest Hits. I love Ralph Stanley. And also — I feel bad because I don’t really know how to pronounce his name — the banjo player from Punch Brothers.

Noam, yes! He put out his own solo banjo album a couple of years ago and I just thought it was beautiful and melodic, and just touching. I really enjoy watching videos of him playing. And Steve Martin, of course, for other reasons. There’s a female clawhammer player and I’m blanking on her name, but I just saw a couple of videos of her within the past year and I was absolutely blown away. Abigail….

Speaking of Béla, in “The Otter,” was that an electrified banjo?

What was I doing for “The Otter”? No, I think we just miked up a Deering open-back banjo or something. For most of the record, I was using an open-back banjo, flatpicking. There was some finger-picking, too, but without finger picks; I play with just my bare fingers when I’m fingerpicking. That’s just how I picked it up, and I haven’t really strayed from it.

Last fall, I started watching tutorial videos of how to play Scruggs-style. I’ve been trying to get some rolls down, and it’s fun to play. I was picking it up a bit. And then once again, I went back to — I wanted my own voice. I was like, “I don’t think I’ll use this for anything with Caamp, but it’s something I will do in my free time just for fun, because I want to try it out.” I feel like it’d be fun to learn all the different styles at some point in my life.

Do you contribute any lyrics?

The very first album, we were sitting across from each other writing, or he would bring a song like “Vagabond,” mostly all there, then I would come up with my banjo stuff. This album, Lavender Days, Tay wrote all the way through and presented it to the band. But Tay writes 99.5 percent of the lyrics.

For the melodies, we all write our own parts on our own instruments. But for this album, he wrote the bones of the songs and then we added our flavors onto it. But my number one love is melody, and coming up with, like, hooky lines. Back in the day, Taylor called the banjo a melody factory, because it just it sounds so good. And I would never come up with the lines I do on the banjo on acoustic or electric guitar. It just has a completely different tone and sound to it that makes me write lines differently. My favorite thing about the banjo is that every time I pick it up, something that I would never have thought of on another instrument will come out.