Cayce Zavaglia: Would You Please Be Quiet Please 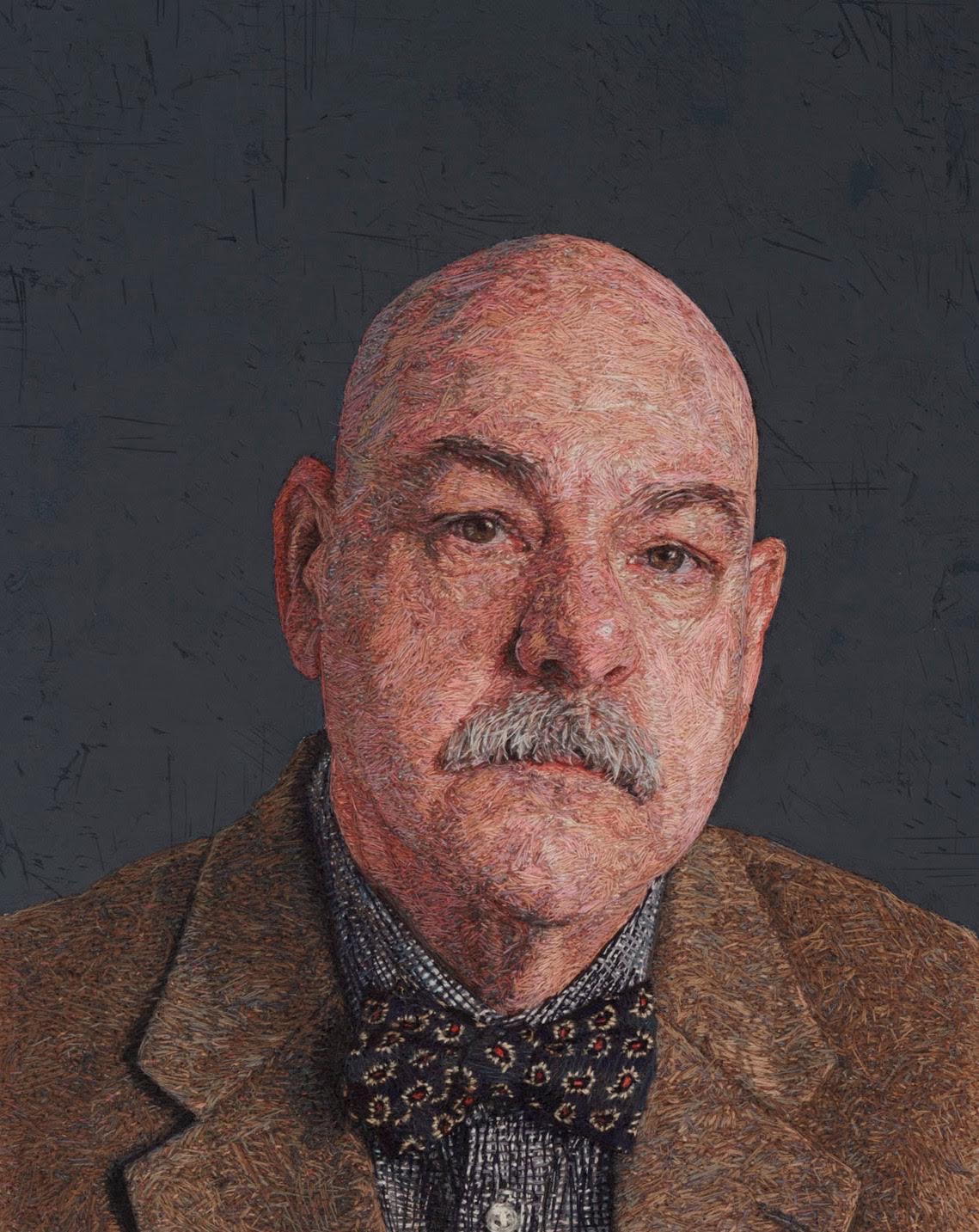 "The longer you look at an object, the more abstract it becomes, and, ironically, the more real.

Cayce Zavaglia makes intensely detailed embroideries of wool and thread that have the look of photorealistic paintings … although, from a distance, Zavaglia’s portraits seem to be nearer the surface than they actually are. Upon a closer viewing, one can see labor-intense striations of stitching and color set to a simple background that makes the face of the sitter the center of attention. Letting one’s eyes wander throughout the portraits is a delight. There is detail found in layer after layer of the artist’s work, from common things like a bow tie or an intense red coat, to the shoulders of one of the sitter’s brown suits.

The faces in these pieces have the intensity and precision that only a master can make, but Zavaglia doesn’t only create lucid and precise portraits. In her Verso series, some of the embroideries are turned backwards, as it were, to exhibit the hidden side of the sitter, as strands of threads wildly jut out and offer another, secret perspective of the subject. While the formal precision holds in these Verso series, as well, the viewer is delighted by the surprise of the wildness within — the loose ends adding visual grace notes to the form.

Zavaglia recently had a show in New York City at Lyons-Weir Gallery, which attracted the likes of Chuck Close and found Zavaglia, who had with some trepidation secretly sent Close slides of her work in 2004, with a marvelous and haunting show. One wants to touch every inch of these pieces in order to know them better, but in the end, there is magic here in trusting the eye’s vigilant gaze while living in Zavaglia’s detailed and original work. 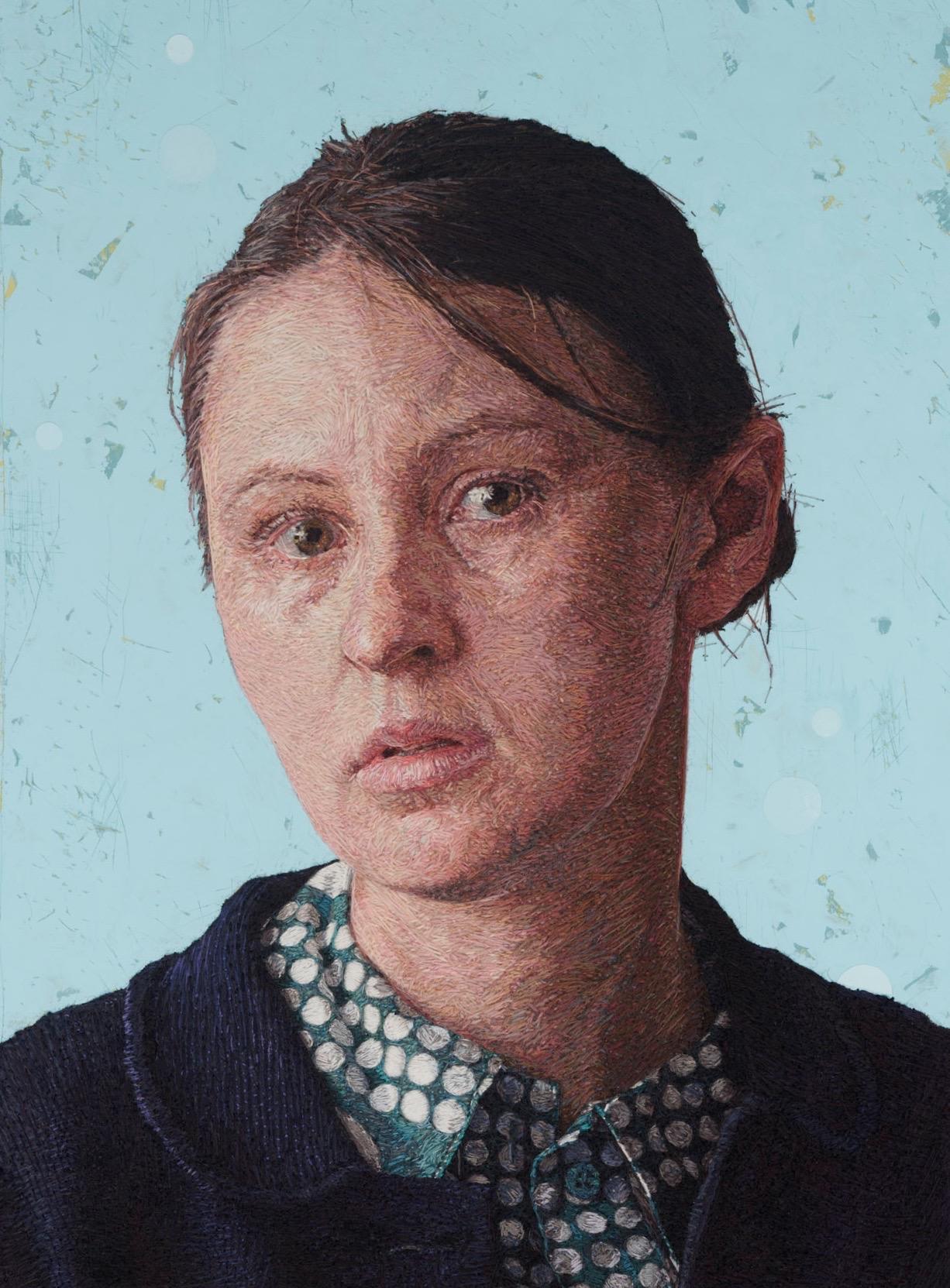 You began embroidering canvas about 12 years ago. How did this idea of stitching portraits occur to you?

I spent my childhood years in Australia … til I was 13. My embroidery pieces stem from a work I made as a kid in which I embroidered an image of a sheep station out of crewel wool. Something about that work resonated with me, and it never left me. I studied painting in undergrad and grad school. When I was pregnant and starting a family, I could no longer be around turpentine, varnish, and chemicals, and I kept thinking about that first exposure to embroidery. I wondered if it were possible to embroider a portrait and eventually tried sewing one. I made a small self-portrait out of crewel wool to reference this embroidery from my childhood, but the image was too small and the wool was too thick. So, I had to play around with the scale and experiment with technique. I’ve been making the embroidered works for about 14 years now.

Do you generally work from photographs in order to create portraits?

Yes. I always work from photographs. I usually have a photo session and take about 150 photos. Usually the sitter is nervous … and I kind of am, too. I never choose an image from the first 80 pictures — it takes about that long to know what I am looking for and for the sitter to get comfortable.

There is such precision in your work. Could you talk a bit about the labor that’s involved in such pieces?

Over the years, the technique has become more and more obsessive. In the beginning, I was trying to figure out how to create the illusion of hair, flesh, and cloth out of wool … the stitches were much looser and I used fewer colors. Because I was not trained in embroidery, I did not quite know what I was doing, but knew what I wanted the end product to look like. I practiced “renegade embroidery,” making up my own stiches and relying on my background in drawing and painting to use thread as a drawing tool and attempt a portrait. The making of each piece was the “on-the-job training” that informed the technique of making the next portrait. 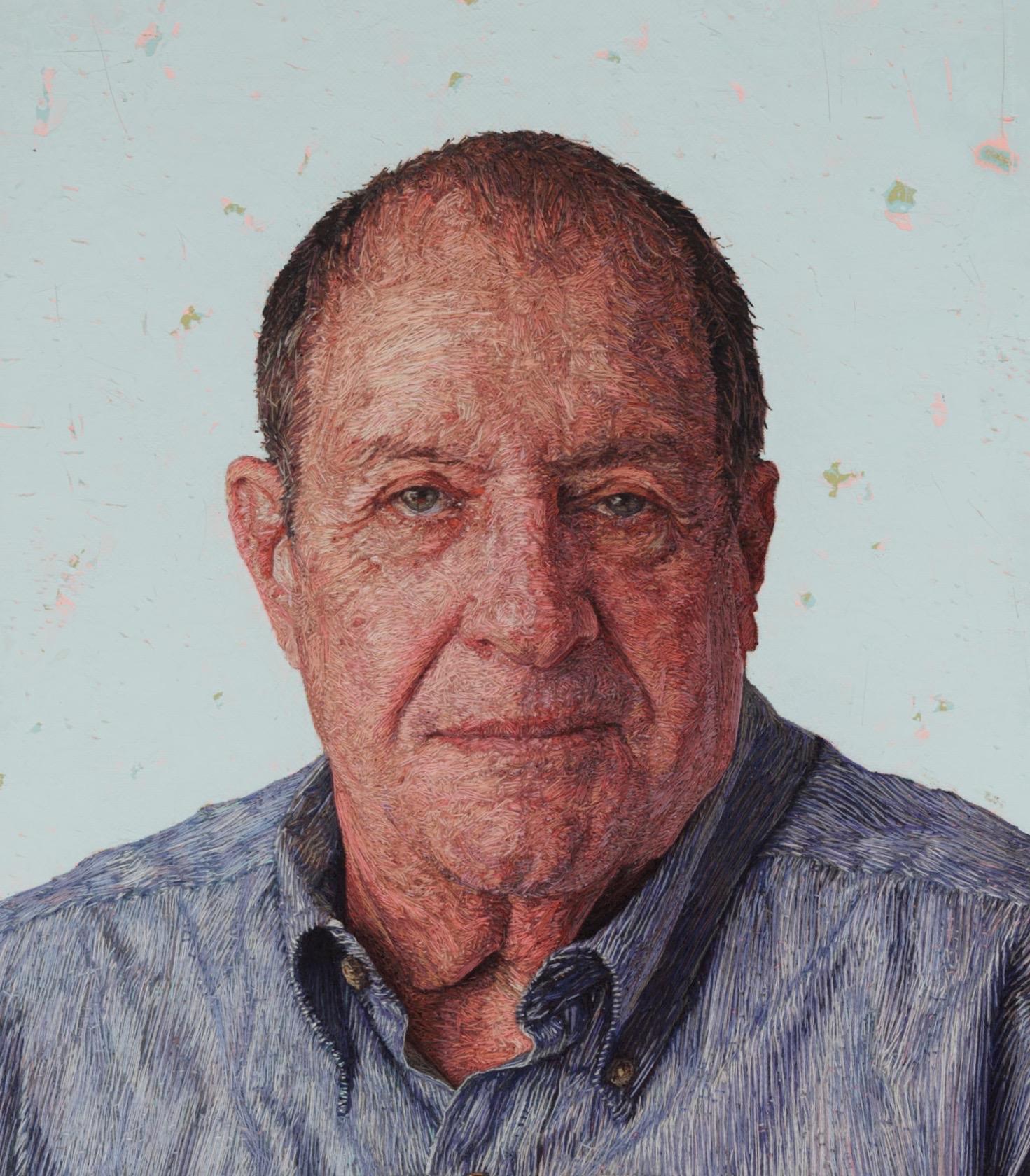 Did you always work with figures and faces, or was there a time in your career for more abstract work?

I have always been drawn to the figure. I did figurative painting as an undergraduate student and in graduate school. I was always a little apprehensive to make a direct portrait of a friend or family member. In undergrad, I would do collages, which represented someone I knew. In graduate school, I decided to actually paint portraits of the people in my life. In these early paintings, I tried to incorporate more of the body; people in them had huge heads with little bodies and big hands — they had a bit of humor to them. In the embroideries, I decided to strip away all the gimmicks and just do a portrait of someone I knew against a minimal background. Throughout the years, one thing has remained constant … and that is the direct gaze of the subject toward the viewer. I am still not tired of this pose.

I have never made abstract work in the past, but have recently started to make a series of abstract portraits based on the reverse side of my embroideries. When I turned my embroidery over a few years ago and noticed this other side, it was an exciting discovery that allowed me to introduce paint back into my work. I now do the embroidered portraits and have a separate series of “Verso” works, which are small gouache and large-format acrylic paintings based on this reverse image. This back side is messy, tangled, knotted, and has lots of loose ends. It is my hope that, by focusing on this reverse side and using it to inspire my paintings, that it would initiate a conversation about the divergence between our presented and private selves.

What draws you toward the faces you create?

I only do portraits of family and friends. I like the personal connection and it definitely inspires the work. I look at it like a visual diary of those in my life and the aging process … as some sitters I have repeated several times. 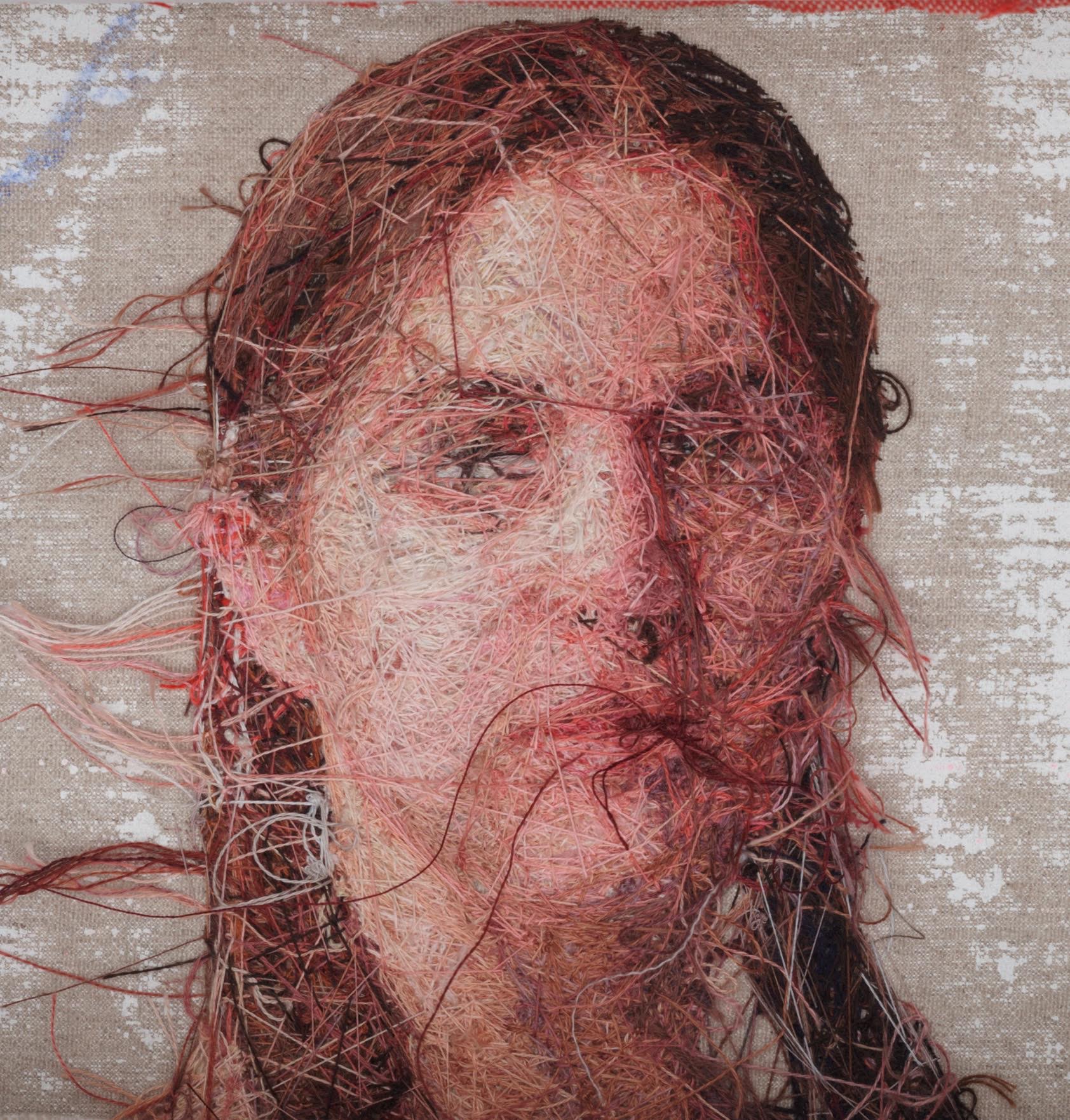 Who are some artists that you admire or at least draw inspiration from?

Coming from a background in painting, I am still primarily inspired by painters. In undergrad, I worshipped Lucien Freud and loved the way he handled the paint. In graduate school, I looked a lot at Elizabeth Peyton. I was more drawn to the way she handled the paint and the supports she worked on. Today, I am relooking at Chuck Close and his current work. Also, Alex Katz is a big influence. I love photographer Loretta Lux’s work, and have revisted Peyton and Freud to see how their work has changed over the years.

When did you begin as an artist? Was it always in your blood, so to speak?

I was crafting and making before I was looking and making art. My mum taught me how to cross-stitch and my grandmother taught me to crochet and make crafts. What I love about this current body of work I am making is that it references the world of craft and tradition, but does it in a sneaky way. The work comes across as figurative painting and you only see that it is embroidered if you look closer. I have always resisted the label “fiber artist” because I think of myself as an artist who happens to use thread and wool … at the moment. However, I do love that so many other artists are incorporating traditional craft techniques into their work and doing it in a new and sophisticated sort of way. The art world is now definitely taking notice.

There are a few occasions when the written word must submit or is overcome, at the very least, by the image. Though countless articles are subsumed each and every day by “the image-dominated media,” it seems not just conventional but proper to let Zavaglia’s pieces speak for themselves. It was a warmer day in early December when several people gazed upon her work at Lyons-Weir in Chelsea, in rapt attention, their eyes scanning each and every inch of the pieces, the onlookers’ mouths like O’s that opened and then closed. They were overcome by beauty and submitted to it. Cayce Zavaglia is one of those artists that sees to it that one shuts up — and shuts out — the rest of the world. Beholding her work is a privilege, like seeing the past and future reside and dovetail within faces — and objects — that gaze back at the viewer, demanding a reciprocal silence. 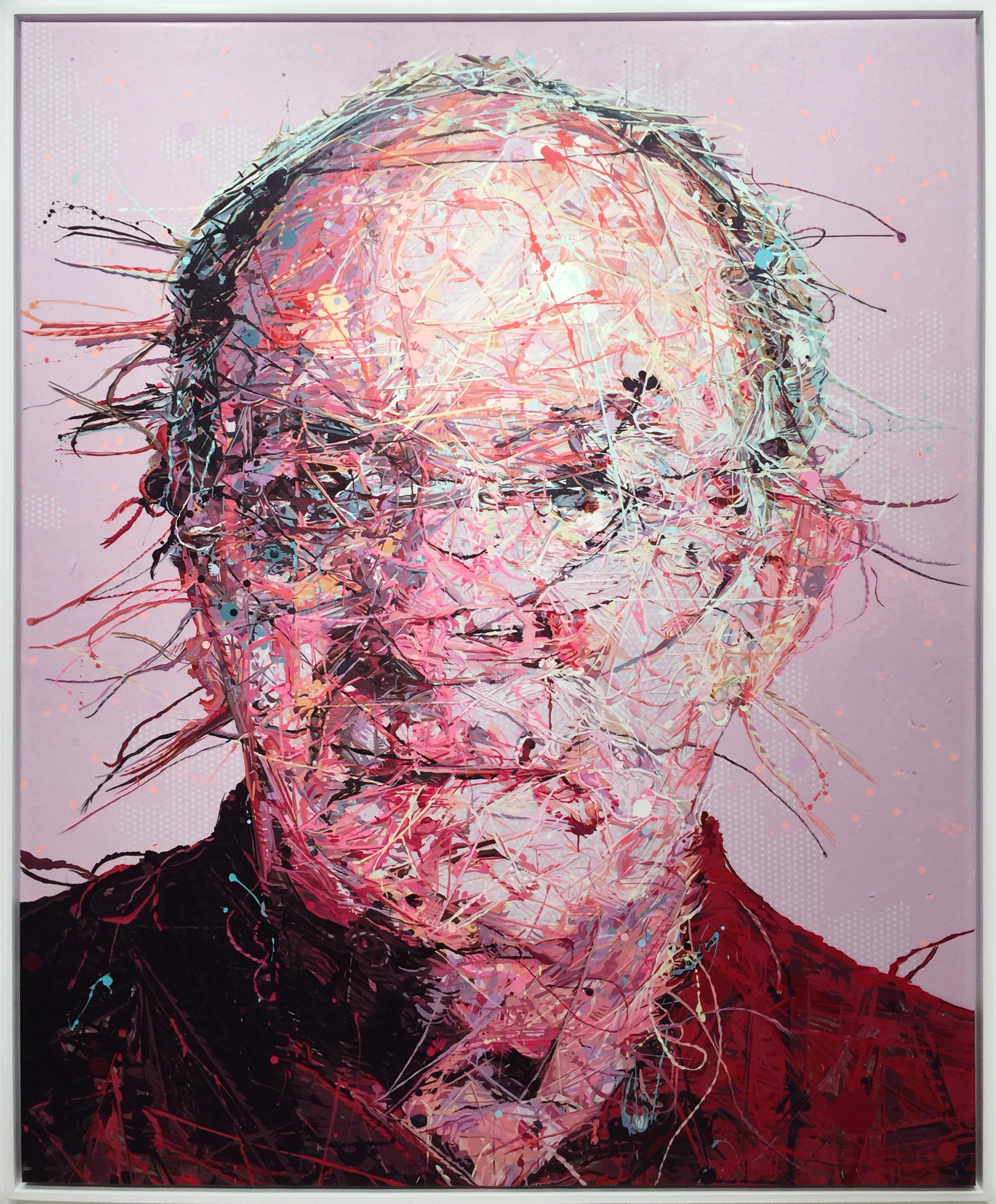