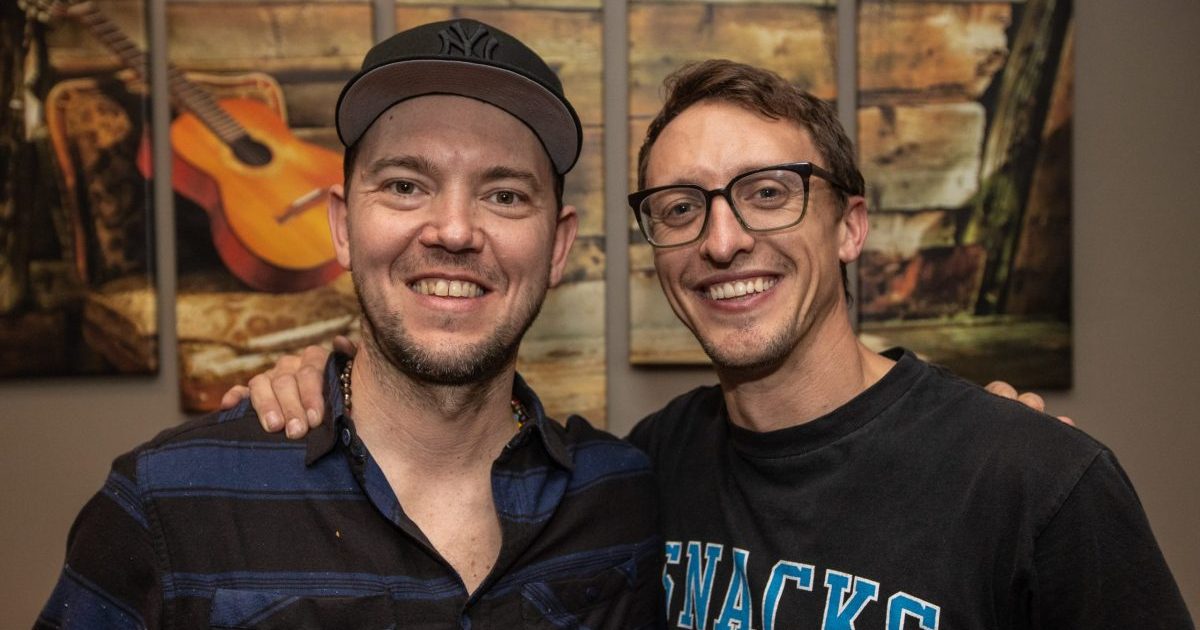 The Infamous Stringdusters have been together for close to two decades, and one big reason for their longevity is that everyone gets the chance to step out with side-hustles and solo projects. Even live sound engineer Drew Becker has one – a side business to market one of his inventions, a device that reduces volume on a vocal microphone when the singer walks away.

“That’s my baby,” Becker says, “and I hope to see one on every stage in the future.”

Multiple Stringdusters members are putting out solo albums this year, including banjo player Chris “Panda” Pandolfi, who also makes soundtrack music. But his primary extracurricular project is a podcast, Inside the Musician’s Brain, currently in its third season on Osiris Media.

“It’s deep-dive interviews, musician to musician,” he says. “Béla Fleck was my last guest and Aoife O’Donovan was the guest before. Billy Strings, Trampled by Turtles, Sierra Hull, too. It’s an awesome outlet to take fans deeper inside the music.”

The band’s 2021 release, A Tribute to Bill Monroe, will compete in the category of Best Bluegrass Album Grammy Award in the ceremonies in Las Vegas on April 3. Meanwhile, to commemorate the release of their new project, Toward the Fray, we’ve been catching up with all of the Stringdusters – our BGS Artist of the Month for March – for a series of three conversations from the road. Read part one with Dobro player Andy Hall and guitarist Andy Falco. Read part two with fiddler Jeremy Garrett and bassist Travis Book. Here is part three with Becker and Panda.

BGS: Drew, how long have you been the Stringdusters’ live engineer?

Becker: Since 2008, the van and trailer days, and we’ve just been working our way up to where it’s logistically easier and more efficient. They were my first professional job outside the bar gigs I’d been working through college going to sound school. We’ve grown together technically through the development process, figuring out ways to put on better shows on a night-to-night basis. It’s a learning process, one puzzle piece at a time. You fix one thing, and that might create something else that needs improvement. I do sound for just the live thing. Early on, I’d hang with them in the studio, too, just because it was awesome and I wanted to absorb anything I could about the process. But studio and live are totally different teams and skill sets. Like spray-painting versus watercolor, both are painting and some of the tools might be the same. But it’s totally different skills.

Panda, we heard you’ve been dealing with banjo issues today.

Pandolfi: It went out during last night’s show! Something was wrong with the pickup within the instrument.

Does that happen often?

Becker: Not often, fortunately. For a pickup to melt down, like three other things have to go wrong before that. This is kind of the worst-case scenario, where it’s not totally dead. It works for soundcheck and maybe even a full show, then presents issues the first song the next night. You spend hours troubleshooting, it solves itself, fails again. Then you call every music store in Atlanta and drive 30 minutes to get the one pickup you need.

Panda: It’s kind of an anomaly. Electronics, nothing to do with the instrument. Part of the bluegrass world we’re in is having to amplify acoustic instruments to create a huge sound. These are instruments that weren’t necessarily designed for that, so it’s an imperfect science with limitations. It takes a lot of time and energy for us to perform bluegrass in big venues for big crowds and we’re always trying to do better at it. Some nights work, some don’t.

Do you have just one banjo you play all the time, or a lot of instruments?

Panda: I collect old Gibson banjos from the 1930s, the heyday. From 1929, when they settled on the modern flathead design most players use, to 1939 when metal had to go into the war effort, and they never regained their former glory. Anything from the 1930s is coveted and I have a bunch of those. Eight right now, I think. It’s always hovering between seven and 10 or 11. I’ll sell one, buy another. I’m not in it to make money, but I love them and know what I’m seeing when I look at one. I like to get them into the hands of younger players who may not be as versed in the marketplace but want these banjos because they’re special.

Who would you both cite as mentors?

Panda: My biggest inspiration is Béla Fleck. I did not know anything about bluegrass before I heard the Flecktones. That’s what introduced me to banjo. I worked backwards from there, to Earl Scruggs and Tom Adams. Those two and Béla are my top three influences. Tony Trischka, Bill Evans and Ron Block are good friends and mentors I call on for advice about music and life. I’m lucky to call those guys friends.

Becker: Early on, a lot of my mentors were in Nashville working with bands in our acoustic genre as we grew. Bands headlining festivals, their engineers mentored me. As I’ve grown in this genre, I’ve looked outside bluegrass to pick up lessons and techniques from rock or electronic music. Learn to understand PA systems and how to optimize musical spaces. It’s a challenge, figuring out how to amplify acoustic resonant bodies on a stage 10 or 15 feet from the PA speaker.

I’ve heard about the show-and-tell sessions with songs before recording. Is there a live-show equivalent to that before tours?

Panda: We go through a big process of arranging songs for the band to make them quintessential Stringdusters songs. The focus first is the studio, making the album. Then there’s usually a long lag time before they come out. They might sit there for a year before we play them live. Then we have to rediscover and relearn the material for the stage, learn what works and how to translate them. I make the set list, divvying up singers and instrumental features with transitions, so there’s a process of understanding how the new songs fit in with the whole other step that happens much later than the record. Drew will have to work to replicate things from the album, and it’s always evolving.

Becker: Throughout my 14 years, some records have come out with material they’d already been playing live for months. That’s not happened for a while. The last few, the band is off recording, and the crew might not even know about it. Then we get the new material and figure out how to pepper it in. I heard this record for the first time in January and it came out in February, so I was studying and taking notes, seeing where effects might translate directly and where we have to improvise. Like if it’s a double-vocal effect from one singer, something impossible to have anyone do live, how do we recreate that? It’s a fun process.

Panda: I do, though not entirely alone. I’ll get requests, somebody hits me up with, “I really want to do that song tonight.” With a new album, a lot of that stuff comes in night after night. We exist in a world where fans come to multiple shows on a tour, so we never play the same song two nights in a row. That gives a baseline of variety. I’m granted a good amount of autonomy to make the set list and it’s something I put a lot of time into. I’ll consider what we played the night before, also what we played the last time we were in that town. This tour, we have an hour and change every night so it’s a matter of packing in heavy hitters as opposed to pacing out two sets over three hours. A lot goes into it.

Becker: I looked it up and the Dusters have played over 300 different songs since I’ve been with them. It’s quite a list.

Panda: Since our inception as a band, all four members have been very involved in the business and different aspects of making the operation go. Early on, set lists were something that had to get done and I jumped on it for reasons that make sense. I rarely sing lead, so my role is to be impartial in divvying it up between singers so there’s a good balance between voices.

Drew, are you going to the Grammys with the band?

Becker: Not this time. If I ever have an opportunity that makes sense, I’ll go. Maybe it will be worth it to do one time. I had as much fun watching the stream of them winning when I was visiting my parents in Florida. I got to jump up and down with them. That was great.

Panda: My parents have always been supportive but also a little skeptical, like every parent. That questioning feeling about music as a career is not just something you feel from parents; you feel that within yourself, too. We’re ambitious people working hard to achieve goals and the path is not always straight or linear. So, winning a Grammy was a great moment of validation and confidence, something that keeps you going and inspires you. I was proud of not just that album but all the trust and commitment and work it took to get there from the band, team, and crew. That was meaningful validation of a much longer arc of work than the one record. It was an amazing moment that helps fuel the mission you’re on, helps you stay committed.

Want to win tickets to see the Infamous Stringdusters at the Echoplex in Los Angeles? Enter our ticket giveaway.