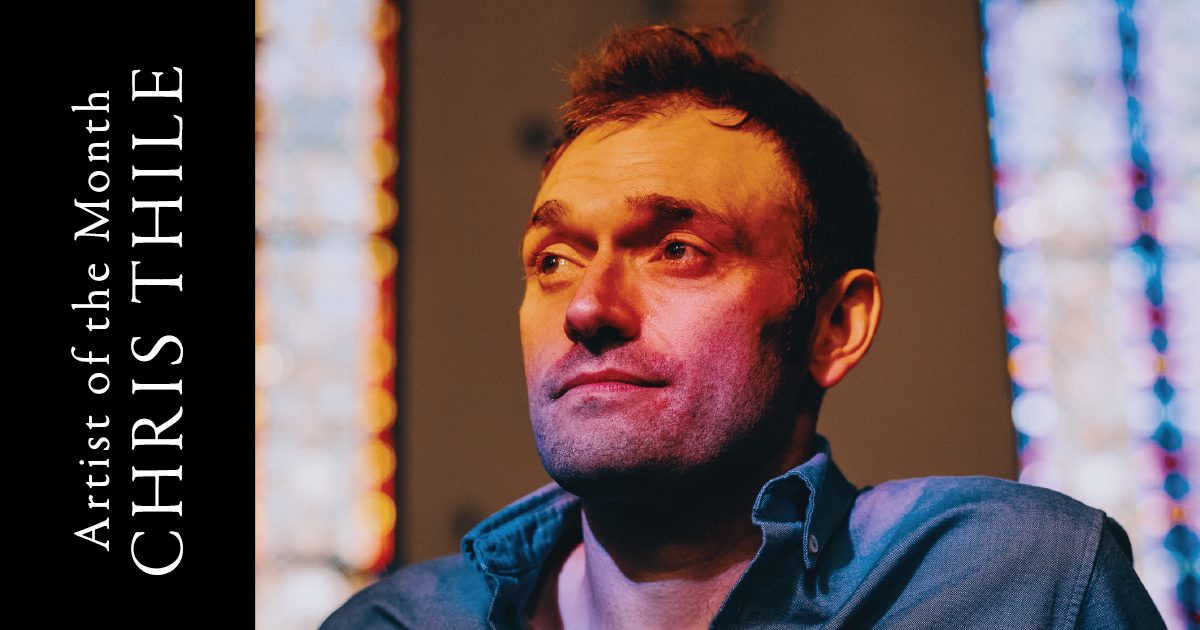 For a while, Chris Thile might have been the busiest man in bluegrass. The former public radio host has snagged four Grammy awards and a prestigious MacArthur “Genius Grant,” all the while maintaining his status as a founding member of Punch Brothers, the Goat Rodeo Sessions, and Nickel Creek, collaborating with plenty of other Americana firebrands along the way. But on his latest album, Laysongs, Thile slowed down.

A solo album in the truest sense — it’s just Thile and a mandolin, after all — the album was recorded by engineer Jody Elff at Future-Past, a studio housed in an old church in Hudson, New York. The setting was a perfect match for the religion-influenced album, which ranges from the biblical passages of Thile’s Christian upbringing to mythological ideas about gods and gathering from the Greeks and the Romans. Below, in the first of a two-part interview, BGS caught up with Thile about recording the new album, finding inspiration in memories from his adolescence, and the dearly missed joy of a packed concert hall.

BGS: You recorded this album in a church in upstate New York. What did that atmosphere lend to the album, whether purely sonically to the recording or more generally as inspiration?

Thile: That was such a stroke of luck in a time that felt like it was a little thin on luck overall. [Laughs] We were weathering the earlier stages of the pandemic in Hudson, New York, and someone told me about a church right in the middle of town that had been converted into a studio. I went and checked it out and played a few notes in there and absolutely loved it. It’s not the most awe-inspiring church, but there were stain-glassed windows and very odd paintings that all brought me right back to my childhood.

I never attended a grand, elegant church growing up. This was still a beautiful church, but it was helpful that it wasn’t, y’know, St. Patrick’s in downtown New York — that it had a whole lot of that whole human-beings-just-trying-to-do-the-best-with-what-they-have kind of a vibe. Getting to be there was really helpful in terms of getting into character for the songs that I was recording. So much of the record comes from solitude… Actually, the solitude of the pandemic felt a lot like the solitude of spending one’s adolescence in a church pew.

What do you mean by that?

I spent so much of my adolescent time in church wondering if I was the only person there who was doubting the existence of God, or who couldn’t not think about how attractive the girl two pews over was. “Wait, I’m going to hell now probably, right?” Or, “Wait, is there hell? What is going on?” The pandemic thrust me and a lot of other people that I know back into that sort of lonesome, existential monologue: “Has every single choice I’ve made up to this point been wrong, perhaps?”

The sort of strange dialogue that we have with ourselves late at night started reminding me of those weird dialogues I would have with myself in church. I could well imagine at 16 years old sitting in this pew at Christian Community Church in Kentucky. I could well imagine there was a little angel and devil on my shoulder kind of duking it out. The centerpiece of the record, “Salt (in the Wounds) of the Earth” is very much a grown-up version of that feeling—but you know, also, how grown-up, really? I’m 40 now, and so much of the time, this felt like a rebirth right back into adolescence, smack in the middle of the most awkward period of our lives.

I loved being in that church for all those reasons. It was so easy to put myself in the headspace I was in when I had written the lyrics or when I discovered the power of those songs that I didn’t write that are on the record. It just lent a certain weight to those performances.

Why did it feel like the right time to approach religion specifically here? Was there anything you felt you had to tread carefully around?

If there’s a silver lining of this whole incredibly disorienting and distressing affair, it’s the chance to gain a little context: to have been forced to take a massive step back and to take a look at our lives, whether we wanted to or not. One of the things I saw, in the midst of missing the community that I’d inserted myself into, was that community often ends up acting in ways that are similar to my experience of organized religion.

A lot of people who grow up with religion and veer away from it at a certain point are veering away from what they — what we — perceive to be a poisonous exclusivity, or habitual exclusionism. I think that’s one of the main turn-offs for my generation on organized religion. You start meeting people who aren’t welcome in the flock, and you start wondering why. Having taken a step back, I see the same kind of exclusionary behavior in my current community. If you take a look at your own community, it’s probably full of people who think a lot like you do, and who feel very similar to the way that you do about whatever’s going on right now, and who live in a very similar way. I worry that we, as human beings, are trading one messed-up thing for another messed-up thing.

I adore community. I love it so, so much. For instance, the Telluride Bluegrass Festival: I feel like those are the high holy days of my acoustic music-making community, and to be deprived of them is so painful. You feel cast adrift, untethered. I can’t wait to get back and I’ll never take that for granted again. But I also want to go back there with my eyes wide open as to whom I have habitually not welcomed into that community. What barriers am I being a part of unknowingly placing between people and that community that I love so much? And what harm is that doing that community?

Tell me about how that harm appears on the record.

There’s a lot in the record about coming together, but there’s also a lot in the record about our compulsive need to compare ourselves favorably to other people. In an effort to feel better about ourselves, we look for someone to feel better than. That’s what “Salt (in the Wounds) of the Earth” is about. I took a look at this thing that had been a big deal for me in my adolescence, The Screwtape Letters by C.S. Lewis, and I was wondering: What would those demons be up to with me, right now? They would be preying on this compulsive desire to feel good about myself. One of the easiest, dirtiest ways to feel better about yourself is by looking at someone else and going, “Well, I’m better than that guy.”

In “Laysong,” the lyrics mention “drown[ing] out the enemy.” It made me wonder what it is that you consider the enemy — maybe it’s this comparison trap, maybe not — and how you drown it out.

When I wrote that lyric, the enemy was he or they that would talk loudest regardless of whether they had the best idea. “I’m gonna say whatever I have to say louder than anyone is saying anything else, and therefore it will be all that’s heard, and the discussion will be on my terms.” That felt like the enemy. And at that moment, in that lyric, I had to write it. It fit with the shape of the melody. The idea of drowning out the enemy — I couldn’t shake it, even though it’s not what I believe to be right. [Laughs] Hopefully you can get a sense of that in the performance, that it’s coming from an angry and not altogether balanced place. In that moment, I was pursuing the idea of drowning out the enemy with beauty, with restructuring, with anything, really. Let’s get a love song, let’s get a hard-times song, anything but a song about the front page of the newspaper.

The record starts there and ends with the Hazel Dickens song, “Won’t you come and sing for me.” When I get back into the concert hall, there’s no way I’m not ending my solo set with that song, the performance is going to be sincere—especially at the end of all this solitary music-making. [Laughs] But “Laysong” is very much like an altar call for the record. “Here’s what we’re gonna discuss.” Who knows where we’re gonna come out? I know that when I listen to a record, there’s a collaboration that starts there. I would love to imagine that happens when people listen to my records, too—that it starts a conversation. I can’t wait to feel that in the concert hall. No piece of music is done until you [the audience] hear it. And I am so dearly looking forward to that completion of this little bit of work.

Editor’s Note: Read the second half of the BGS Artist of the Month interview with Chris Thile.