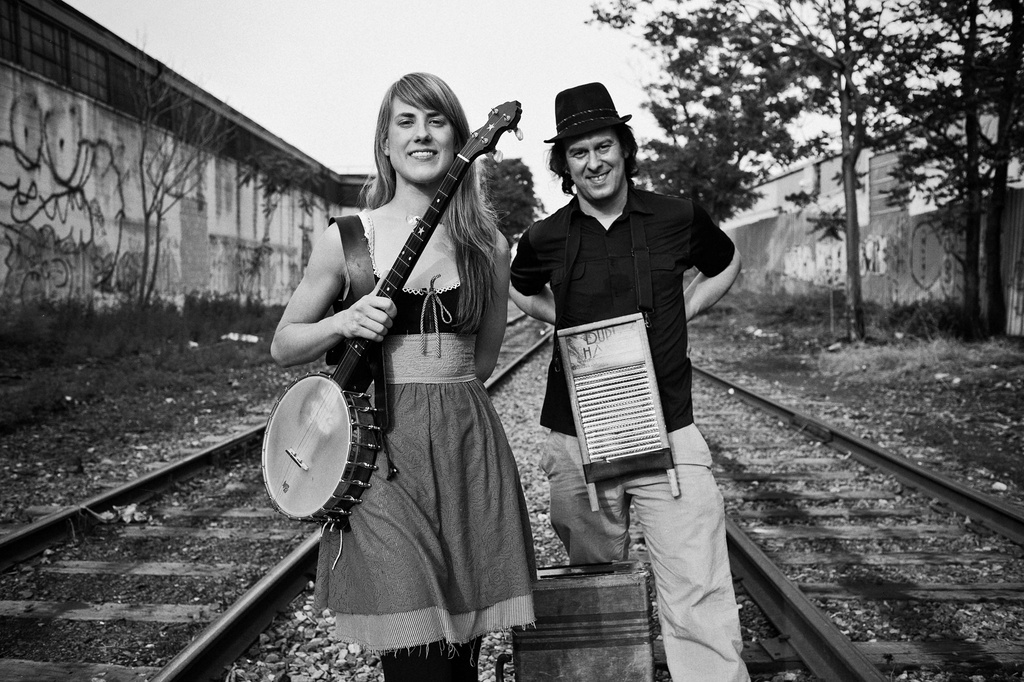 DUBL HANDI (pronounced “double handy”) is a Brooklyn-NY based string band named after the washboard company of the 1800’s. Although the project originally began as a duo of banjo player and singer Hilary Hawke and multi-instrumentalist Brian Geltner, the two have recently added guitarist Ernie Vega, making DH a trio.

Embracing a worldly view of folk music, Dubl Handi draws from, as well as expands upon, the traditional tunes of the Northwest Appalachian region by employing percussion, guitar, drums, and banjo. These artists deliver their own unique interpretations of their favorite songs, while also throwing in a healthy dose of originals too.

Dubl Handi’s new album, Up Like The Clouds, is out now. I recently had the opportunity to speak with Hilary Hawke about her own musical history, how she connected with Brian and Ernie, the vibrant community of Brooklyn’s Jalopy Theatre, as well as the making of Dubl Handi’s new album.

When and how did you begin learning and playing music?

Hilary Hawke: I always really loved music and musical instruments as a kid, as well as listening to records and dancing. I formally started learning music when I was 8 years old, on clarinet. I picked up guitar around 15 and then banjo around 22.

What drew you to playing the banjo?

Hilary: I loved folk music but I actually ended up getting a degree in music on the clarinet and classical guitar (neither which I play much anymore). The practicing and studying of music in an educational setting was so intense I didn’t feel like I could be creative on either instrument. When I started playing banjo, it was like a release of creative emotion. I had an intense desire to write music and perform, and banjo just became my outlet.

When did you join the Jalopy Theatre & School of Music in Brooklyn, NY? Can you talk about your experiences there?

Hilary: I think it was back in 2006. I met Geoff and Lynette (the owners of Jalopy) at a bar called Bait & Tackle in the Red Hook neighborhood of Brooklyn. Jalopy was just a pile of dust and dreams at that time. They told me about their plans and asked if I wanted to teach banjo there one day. I of course said yes!

I believe Jalopy has now become the placeholder for something greater happening in Brooklyn. It resembles the community it is in and the strength of music to hold people together. It is in the process of becoming one of the most influential music venues/schools of its time and I am proud to be a part of that.

How and when did you and Brian meet?

Hilary: We met around 2006 playing with different folks and in different bands. I ended up doing a recording session that he was on, and we became friends after that!

When did you decide to get together and form Dubl Handi? What drew you together musically & personally?

Hilary: Brian is one of the most musical drummers I’ve ever played with. He is extremely creative and comes up with quirky ideas that are really entertaining to listen to. For example, he might take a solo and use the things on the walls as part of the sounds. If there is a metal sign, or something like that, he uses it. He uses the materials around him to improvise.

We put Dubl Handi together as a way to make money busking at farmer’s markets. We’d get a nice crowd of folks around us every time and we realized that we had to make a CD.

You play a great number of traditional tunes. Can you describe your songwriting processes of originals, and how these culminate for you?

Hilary: Well, Dubl Handi is mostly traditional music with a few originals, but I do have two other projects that I write quite a bit in like Hilary Hawke & the Flipsides and M Shanghai Stringband.

When it comes to writing, I decide what kind of song I want to write, and what is the feel I am going for. What would add to my set? I also carefully think about the intention of the song. Do I want to write a song for people to dance to? Or, for people to listen closely, or just to sway to while you sit at the bar? This makes a big difference and usually helps with how fast I can get it done.

Then, I just shed lyrics and spill out thoughts on a page. I use a lot of imagery, so this part is fun! I lay around with chords and lyrics, experiment with ideas until something sticks, and record that idea quickly. Then I’ll keep it and listen to it on the subway. Refine!

For example, on the album, ‘Lonely Ghost’ is a fun tune in F tuning on the banjo. We were playing a weekly residency in Williamsburg (Brooklyn) and needed something up tempo to end our songs with. We’ve been playing with a wonderful guitar player, Ernie Vega, who has a strong blues background. So we really had that in mind when writing the music for ‘Lonely Ghost’.

Can you briefly share some of your sources of inspiration?

Hilary: I really am a music lover, and I love hearing people play and there are so many people I admire. I get a lot of inspiration from hearing collaborations and seeing people sharing the stage, and sharing their voices without ego. I love seeing people be creative with their music in non-commercial ways.

Was there a tune(s) that set the course for what would become Up Like Clouds? Did you have a vision for the recording overall?

Hilary: The main vision was to capture what we do live, even though some of the tracks have overdubbing and additional instruments. We wanted to capture that energy, and have an interesting choice of songs that would be uplifting and interesting to listen to.

Can you talk about your philosophy and inspiration behind bringing in such diverse instrumentation? Specifically banjo, snare drum, percussion, mellotron, marxophone, washboard, etc.

Hilary: It is interesting because we really tried to preserve the original feel and spirit of each of these traditional tunes on the CD. That being said, I think we wanted to add a little extra spice to each tune while keeping a duo sound. So, in other words, I think we had a lot of ideas and were keeping some good boundaries with how far we wanted to stretch each tune.

I would also be interested in hearing your vision of combining the traditional with the contemporary.

Hilary: I think traditional music should be played in a way that allows the performer to relate to it. I will never be Roscoe Holcomb or Tommy Jarrell, but I can make the music my own. I think, there is a fine line when relating to an audience, especially an audience of people that want to hear things played note-for-note. I play traditional banjo music, but some people find it odd that I enjoy playing both bluegrass and old time (clawhammer). I think all music in this genre shares similar roots and should be played if it relates to the performer.

Can you describe the recording set-up and process for the album?

Hilary: Many of the songs were done live in the same room without headphones. Even the lead vocals were done live on most. After listening to each track we would add minimal things to keep each song unique or just give it a bit more dimension. We listen to a lot of music from our touring friends and successful bands here in Brooklyn. I think we are all kind of influencing each other.

What have you been listening to lately?

Hilary: We’ve starting recording our next album and we’ll be adding a fabulous guitar player named Ernie Vega, making us a trio! We’re always playing a lot here in NYC and having a guitarist really fills out the sound, especially for larger venues.

I’ll be graduating with my masters of music in May and we are really looking forward to sinking ourselves deeper into getting out of town and playing more shows, getting a booker, and meeting and playing with a lot of folks! We are also planning some touring in the UK, and working with a few folks over there already and sending our CD out. We’re excited!!!