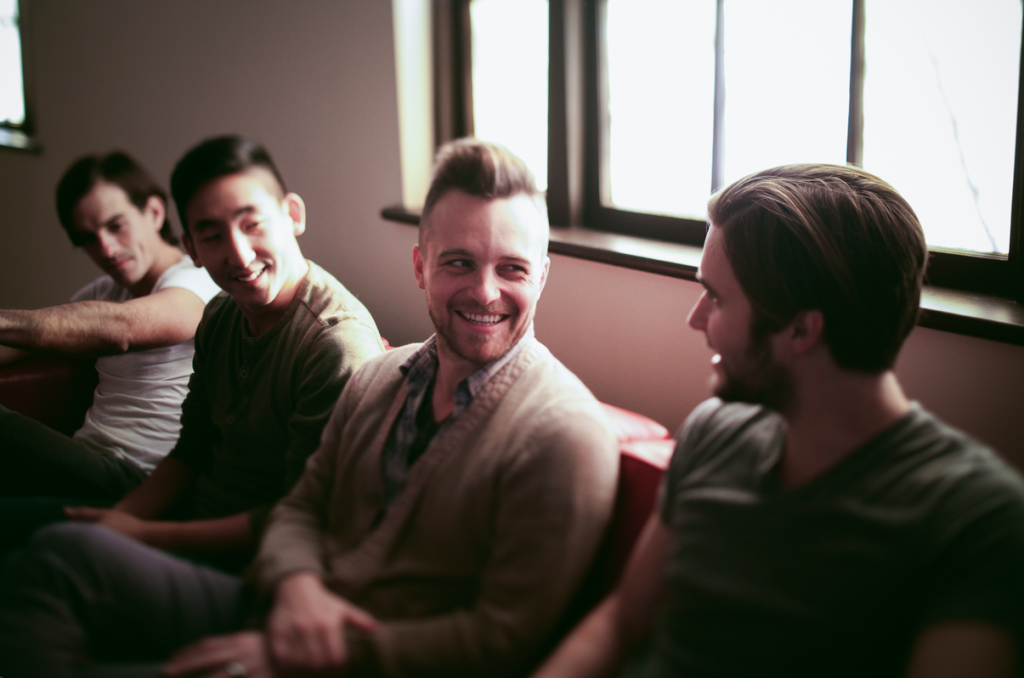 For a band that claims its name from the protagonists of the darkly dramatic Russian novel ‘The Brothers Karamazov’—these Seattle folk pop gents are anything but. Their skillfully crafted tracks are rich with layered instruments, harmonies, and bright melodies.

IVAN & ALYOSHA’s dynamic high-energy shows and past EP releases have won over devoted fans and garnered much critical acclaim, cooly slipping into NPR Music’s ‘First Listen’ spot for their debut album, All the Times We Had, and opening for the likes of Aimee Mann and John Vanderslice.

Emma Morris had the chance to catch up with Ivan & Alyosha’s friendly and ultra-focused frontman, Tim Wilson, about everything from confetti machines to freak-outs on stage.

To coincide with your brand new album, you just kicked off a tour—congratulations on both accounts! Any venue or city that you’re particularly pumped about returning to?

We love playing LA—I used to live out there and have a lot of friends there. We love the weather and sunshine. SXSW in Austin, TX just happened and that festival is always fun!

You’ve spent a lot of time on the road over the past few years. I know you’re a pretty family-oriented band—are you ever able to bring your families on tour with you?

Yes, definitely. A couple years ago when my son was six months old, we took him out on the road, and he spent time out with us again last summer. Our wives come out periodically as frequently as possible.

Every time they go out, the band Hanson brings their wives, kids, and parents on all on a tour bus. Is this your future?

That’s kind of the goal, to be honest. A tour bus signifies a certain level of success, but beyond that there’s a bit more comfort on the road!

I understand your brother is actually in the band as well?

Yes, Pete slaps the bass. He was in another band in Seattle, and when that band stopped doing their thing, both Pete and Tim [Kim] joined us. Ryan and I had done a record together but hadn’t played live much. We existed almost solely in the studio before adding in the other members.

Ivan & Alyosha formed in 2007 and your debut EP, The Verse, The Chorus, came out in 2009. Your bio mentioned that you spent nearly a year writing material for this release. How did you decide on a tone and vibe for the initial EP?

It was certainly a journey and it still is. There’s always a certain amount of expectations for what you want things to sound like, then you get into the studio and nine times out of ten, you don’t know what you’re going to come out with. For the first EP, we were figuring out what worked and what didn’t, and at the end of the day we came up with something that sounded good to us and we put it out. Now we’ve more solidified our sound, but it’s still constantly evolving.

On your first single, “Running for Cover,” the vocal harmonizing is mesmerizing. I love the depth of your sound on this track in particular. When the band grew from a duo to four members a few years back, how long did you take to fine-tune singing together?

On the first EP I sang all the harmonies, but it was always an interest of mine to layer harmonies and arrange vocals in a thought-provoking way. We never set out to be a harmony-heavy band, but when we started recording our second EP, we all just stood around one mic and sang together, then did it again until it sounded right.

But harmonizing in a studio and harmonizing live in front of an audience are two different monsters, hmm?

Definitely. Some nights it’s tough to nail a harmony when singing live and having a monitor blasting in your face, but we go for it anyway! If you hold back you’re not really giving people all you’ve got, right?

Right. Something you said in your bio really resonates with me. In reference to your feeling about being a musician for a living—’anything in life that’s worth doing is hard.’ So, in the interest of building your identity as a band through good times and bad, ideally, where do you see the band in five years?

That’s a tough question to answer humbly, but this band is certainly in it for the long haul. Every night before we go on stage, we gather around, put our hands in, and say “1…2…3…GARDEN!”—which means Madison Square Garden. In five years we want to be playing Madison Square Garden!

You’re known for your upbeat and uplifting live shows. Is it just the energy you guys are putting out to your fans, or do you have some special tricks?

We just try to have a lot of fun on stage. It’s nothing you can fabricate. You’ve got to be in a certain headspace and get beyond yourself in a way. Sometimes there are things that can help…like having a drink or two before going on stage, but mostly it’s just a genuine enjoyment of what we’re doing. We could stand there and look like stiff idiots, or we could freak out, be memorable, and engage people.

I vote for freak out. Actually, I know a band here in Orlando that uses confetti-blowing machines to amp up their audiences.

Man, we would love to do confetti machines at some point…

Although I bet venues would hate that. But you’ll be playing at Madison Square Garden, so it won’t matter.

What’s the absolute best audience you’ve ever played for and why?

Doe Bay Fest on Orcas Island in Washington. Our show there was pretty rowdy—I like it when it gets rowdy. You want people to respond! And my second favorite, in a totally different way, was our CD release here in Seattle recently. We sold out the Showbox. That was a really special show because there were a lot of new fans, but it was a surreal and strange night for more reasons than that. The morning of the show, Pete’s first child, Lennon, was born. He [Pete] showed up at 8:30 p.m. and played the show!

Aimee Mann has been a frequent touring partner and supporter to the band. Her guest vocals on the title track of your new album, All the Times We Had, are fantastic. How did this track come to be and how awesome was it being in the studio with Aimee Mann?

That song was one that Pete wrote for his old band and I heard it and said, “I have to sing this song!” So it started as an acoustic thing, then morphed into more of a piano vibe. The strings on the track were actually done by Matt Slocum from Sixpence None the Richer. Amy’s just been so cool to us, we spent some time with her on the road and our manager asked her to do the track—and she said yes! But she actually recorded her vocals in another state, so we weren’t able to be in the studio with her.

Speaking of other musicians—what’s been on your playlist so far this tour?

I was listening to our buddies from Seattle, Pickwick, last night—their new record comes out in a couple of weeks and it’s awesome. We’ve also been listening to old U2 and Frank Sinatra in the van. Oh, and Parlours from Des Moines, Iowa. They’re great.

A good mix of new and old, I like it! I’ve been really into the latest album from The Helio Sequence, and Black Prairie also.

What! The Helio Sequence is one of my favorite bands. I love them.

See Ivan & Alyosha when they play The Echo in Los Angeles on Tuesday, March 19 with The Lone Bellow. For more information, check out IvanandAlyosha.com.