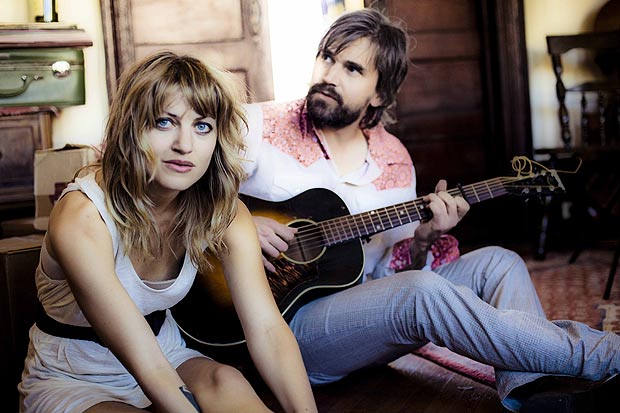 ANAIS MITCHELL and JEFFERSON HAMER are each hugely respected artists in their own right, but together they create a chemistry that is lush and alluring and mysterious all at once.

Their recent collaboration, the critically acclaimed CHILD BALLADS, is a re-imagining of the song collection of Francis James Child, a 19th century Harvard professor who gathered traditional versions of folk ballads from across the British Isles.

Prior to their upcoming west coast appearances, Jefferson explained the story behind the project, and his artistic connection with Anais…

Why Child Ballads?  It’s not what people think…. Who was this guy?

When Anais and I started singing together we discovered we both loved a lot of old traditional music… found ourselves singing a lot of country songs and English folk music.  We both have copies of the Francis James Childs collection.  He was a Harvard professor who decided to collect his history of folk music from England and Scotland, and published several volumes of his work in the late 19th century.  The music he researched and documented covered a lot of the traditional music in the last few centuries and even came over to America and continued to evolve.

We got really excited about working with the actual text.  We’re both writers and like to get our hands dirty with words as well as arranging music.  Our project was going through these different versions and putting together something we created, not just singing some derivative version from some field recordings.  It was much easier with the Child books because he gives you a lot of different versions from what he collected.

We fell in love with the themes and the of the Child Ballads.  They are very ancient – very old.

How did you get in to Celtic and British folk music?

I started playing electric guitar and writing weird songs as a teenager.  Then when I was in college I got in to bluegrass – I just loved the idea that you could go play music with people you weren’t in a band with, that there was this common repertoire, a music that could build community.  That was a real delight that led me in to folk music.

Around the same time a humanities professor gave me a stack of CDs with British Folk Music – Fairport Convention, Richard Thompson, etc… what made it exciting was that my friends weren’t listening to it.  I felt like I had discovered this sort of treasure trove.  I think it formed an idea of the type of music I wanted to create.

You and Anais collaborated on the critically acclaimed Hadestown.  How did you two meet?  What brings you back to working with her?

I first heard about Anais from a mutual friend of ours.  I was on tour with Laura Cortese and we had a gig in Santa Cruz opening for Anais Mitchell.  That night she and I started to talk about English Folk Music.  We made that initial connection — discovering we had tastes in common.

A while later she was playing in Brooklyn and she asked me to open.  After that, we become friends right away, which now makes all the difference when you’re spending long hours in the car together.  But musically speaking we always liked to sing together.  I’ve always really admired her writing and her material.  She reached out early on and wanted to work with me so it really happened naturally.  And this record happened naturally too, even though it took a long time.

The goal was to express our musicality through these old songs.  We could have made an overly produced record but all the framework on the songs was in place and that’s the two guitars and two voices.  Not decorate it too much and not let it get too far away from us.

This album took several years and more than one attempt to create.  What is your process of working together?  What happened to the other attempts?

I started with Anais as her guitar player and harmony singer.  We discovered this mutual love of old songs and decided to make a ballad record.  We’d go up to her house in Vermont take a week make a record, then quickly realized we weren’t ready.  So any time we’d be together, the two of us would just peruse through all five volumes, finding the songs we liked.

We’d search for the right verse then add our own.  Kind of like “bushwacking” as we dubbed it — venturing far off the well worn path that was in the books, Child’s books being “the source”.  That’s why it took us such a long time – some of these songs have thirty verses.  Until we piece together one song – that can take a month.  And then we would sing them so that we knew it felt natural.  Ultimately that’s how we made our decisions as to include and what to leave out – deciding what felt right.

After our first round of work, we went up to Vancouver to record with John Ram.  We had done a lot of work on the songs but didn’t know what kind of record we wanted to make.  That first round had drums, electric guitar, overdubs.  After some time up there we just knew we weren’t done yet — it didn’t work.

Not long after that a friend of ours recommended we go to Nashville and work with Gary Paczosa, and it was clear we had to make an acoustic record.  We were so fortunate to work with a guy like Gary.  He has such an amazing resume.  We’ve got to give a nod to him – the engineering has an immediate lushness ythat you can’t help but notice, and given how sparse the production is, that’s really something special.  Anais and I got down there and just sat across from each other and sang it live.  It took us a long time to get there and do the simplest thing.

See Anais and Jefferson live at McCabes Guitar Shop in Santa Monica this Friday, March 15.  You can learn more about Child Ballads here.