CONVERSATIONS WITH… The Steel Wheels 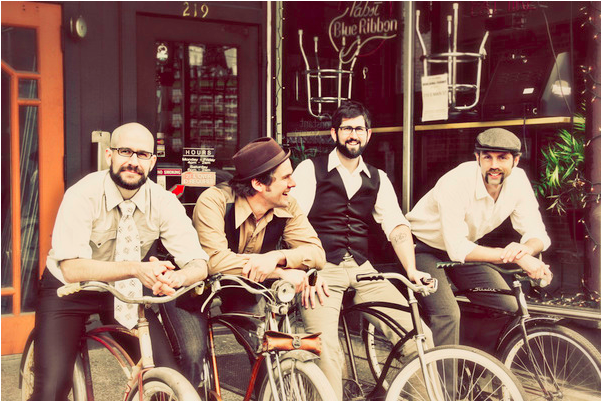 On their new album No More Rain, THE STEEL WHEELS deliver harmony-driven music with such a melding of different styles, trying to describe it with a single term would require far too many hyphens. There’s trad country in there, to be sure, some gospel and bluegrass, even the occasional harkening to 70s rock. But, the main thread running throughout the disc is the energy the band stirs up. Like a late spring thunderstorm rolling over the hills of their native Virginia, there are figurative gusts of wind and brilliant colors. There is stirring four-part harmony and intense instrumental interplay. There’s also a single cover – Tom Waits’ “Walk Away” – among the emotional twists and invigorating turns of their original tunes.

Recently, I had the chance to chat with frontman Trent Wagler about how far the group has come with their musical pursuits, and what it is which drives them.

Let’s start with your new album No More Rain. How did this album come to be?

Trent Wagler: Our band started playing together around eight years ago, but we officially started touring more seriously about three years ago as the Steel Wheels. We released an album called Red Wing and followed it with Lay Down, Lay Low. There’s also been plenty of other music we’ve been playing and writing in that time. Some of that was recorded by me as a solo project. Other stuff had been recorded previously… so, we had all this music and we’d never recorded it as the Steel Wheels. Then, in December we went into this beautiful studio owned by Stuart Martin in Leesburg, VA. It’s an old barn renovated into this beautiful space. We all set up in a big room and played a bunch of these songs. Some of these are the first songs we ever played together, some we hadn’t played in quite a while.

December is always a time when you look back at the year and it makes you reminisce about previous years. It was a nice time for us to revisit these songs and bring them to a whole new audience in a different way with this album.

When you’re reviving songs that have been played in other incarnations before, how live is it? How many takes do you do?

TW: The only thing we overdubbed was background vocals, because of proximity to microphones… especially for Eric [Brubaker] our fiddle player – trying to mic his fiddle and his voice at the same time can get a bit wonky. So, we kept the background vocals out, but everything else was completely live. I tracked all my lead vocals at the same time with the instruments, all in one room. It was all or nothing. That’s a fun way to record. I think we thrive off of that. Sometimes you have great moments in a song, sometimes you hit a terrible note and you can’t use it. There’s no way to punch it in easily when everyone’s playing at the same time. If it was a polished studio take-after-take album, we might not allow those moments to live on. I think the guys in the band – I have a lot of respect for the way they play, but I like the grittiness of [recording] the way we’d play if you came to our living room.

Why the Tom Waits song, of all the covers you could have thrown in?

TW: A number of reasons. The title of the album, No More Rain, comes from that song, which ties together with a song later in that album (“So Long”) that has a few different lines about rain in it: “Do you remember when rain used to fall from these skies?” Then there’s another one that says “Heaven’s a garden where you can grow anything without the rain.”

Some of those poetics tied together with the refrain of “Walk Away”, having [the phrase] “no more rain” in it. I also think the refrain of “I want to walk away and start over again” fits with going back to these old songs and making them new. [When you] walk away and start over again – what do you bring with you and what do you leave behind? Also, it’s a nod to one of my favorite poets. Putting Tom Waits at the front of the album is a challenge but it also pays respect to the songs. That’s fitting for us. As a band, we’re very inspired by the amazing proficiency of the great instrumentalists in the world – especially in the bluegrass realm – but we tend to focus more on what the songs ask for rather than trying to bedazzle people with our hot licks. That’s where Tom Waits fits into what we’re trying to bring. He inspires me. He’s a song master and an amazing writer of poetry put to music.

I was reading in your biography that you’re community-focused because of your shared Mennonite background. That was surprising to me and I think probably a lot of people don’t know much about Mennonite culture or tradition. How does that feed into the music?

TW: I think the Mennonite roots of the band are – I wouldn’t’ say they’re accidental. They’re just there. They are what they are. It’s not like we set out to be a Mennonite band. We just got together as friends. We knew we all had similar roots but it wasn’t something we noted overtly until years later, when people started commenting on our harmonies. We have a lot of good four-part harmonies in our music. The song “Erase” is a good example of that on this album. That’s something that’s true to our backgrounds. We all grew up singing harmony.

In the Mennonite church, you don’t usually have an overpowering organ. There’s a lot of a capella singing. I grew up standing between my mom, who sang a great alto, and my dad who had a fiery tenor. I just chose a part. All of us grew up in that, so the singing aspect to what we do came pretty naturally and organically for us.

Mennonites in general, what sets them apart from any other mainstream area of Christianity, is their ethic toward nonviolence and sometimes non-participation in the affairs of a government, based on their focus on peace and justice. Also simple living and communal living…barn-raising or helping people out on projects, really focusing on the community…

We all have individual journeys as far as how we want to be involved in mainstream religion at this point in our lives. But I think our upbringing has impacted all of us to believe in bringing things down to simplicity and grassroots, trying to find ways we can connect with other people and see the humanity of every person. There’s a basic good that many of us learned through that religious context. We have a desire to see this music we make tying together with local food movements and other grassroots movements that seem to be good and positive toward the earth, relationships, and community.

Find out more about The Steel Wheels and their new album No More Rain www.thesteelwheels.com