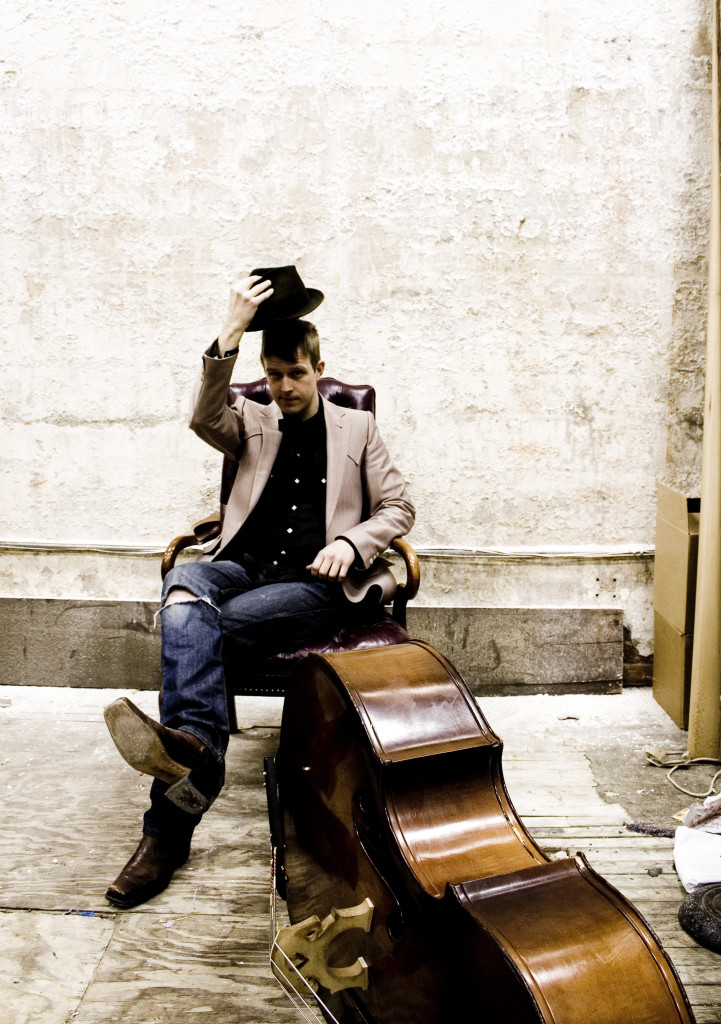 Two months after my wife and I were married in the fall of 2009, we packed our bags and drove down to Nashville for a ‘roadtrip honeymoon adventure’. The mission was to spend the week after Christmas with one of our best friends and cap off our exploits with the New Year’s Eve show by the Old Crow Medicine Show at the historic Ryman Theater.

During our week-long stay in Nashville, we stopped in at an old-time jam and met a really friendly young fellow named Woody Pines. While enjoying the music by the local players while socializing with old and new friends, the fact that Nashville is the kind of town filled with famous icons, working musicians, studio players, and backyard players, I didn’t even consider that some of our new friends might be some of the who’s-who in Americana music.

Fast forward to the spring of 2012. At this point, I was writing about music more seriously, and an envelope from my pal Devon at Hearth Music landed in my mailbox. It was an addictive all-too-short-player called Let It Roll by, you guessed it: Woody Pines! After digging around online, it didn’t take me long to realize that Woody was not only a member of the infamous busking outfit, Kitchen Syncopators (with Gil Landry, now of Old Crow Medicine Show), but that he has put out a bunch of country blues style records to his own credit.

Well, in the blink of an eye I quickly grabbed a copy of Woody’s previous long-player, Counting Alligators, and with those two recordings on heavy rotation, I was hooked on his stuff. So much so, that I was inspired to track down Woody and coordinate an interview him. That feature turned into one of my favorite interviews yet: an in-depth discussion with Woody on his musical history up to and including the making of his Let It Roll EP.

Since that interview, Woody has been touring around the globe almost non-stop, writing new tunes, recording them when he was able, and has just released a new full-length hot off the presses called Rabbits Motel. I recently had the opportunity to speak with Woody on his recent adventures, songwriting, and the making of Rabbits Motel, and I am thrilled to share it all with you here.

Hi Woody, you have done a lot of international touring over the last year or so since Let It Roll was released. Can you share some of your most memorable and inspiring experiences?

Woody Pines: Yeah, Chris, I love going to the UK and Ireland. We have gone over 4 times counting the Celtic Connections Festival we just played at this January. I would say one of the most beautiful places I have ever played was at that festival. There were probably over a thousand people in this giant indoor fruit market, with New Orleans style balconies, shrouded with Christmas lights. We also did a BBC Television shoot that is due out this summer. That was a lot of fun.


How has worldly travel and performing live in other parts of the world connected to your songwriting?

Woody: For Rabbits Motel, I locked myself in my 30 RV, known as the ‘Nashville Office’, that’s parked behind my friends’ house in East Nashville, and wrote a whole mess of songs.

‘Like I do’ is a nod to Rodger Miller, who is much loved around town. The kind of venue also allows for different styles of music to come out too. We figured out how we wanted to do ‘Hobo and his Bride’ in the big theaters during sound checks before the show. The reverb from the room helped build the sweeping quality of the song and inspired the recording. We ended up recording that one in a garage studio at our tour manager’s house while on the road in Scotland.

When did you begin working on material for the new record? How did it all come together?

Woody: I was playing some of the songs over the summer but a handful came out when I was camping out in Nashville in the fall. There was a week or so I became infatuated with this recording device I found at a thrift store, a looping tape answering machine from the 1960s. I was writing songs and recording them, and they eventually became the models for the album when I went into the studio.

I was wide open after that. A suitcase full of songs, low-fi arrangements, 10 days At Peachfork Studios out in the middle of the wilds of Meigs County, Ohio, in a house full of instruments and microphones.

Was there a tune that came together particularly unexpectedly?

Woody: I Think ‘Heartbreaker’ was a surprising one, the original idea was to write a song for Sharon Jones and the Dap Kings and not record it, but we ended up putting it down. It has a swamp pop soul sound that I can’t get enough of.

What were you listening to during this time?

Were there any significant differences between the writing of the new material, versus your previous recordings?

Woody: Only that there are a lot more traditional songs on the older records. I have been writing all along, but what is changing is some of the venues are theaters that allow us to do the deeper songs as well as the juke joint party songs. It is wild to be able to take performance of a song to a theatrical level of mood.

Can you talk about the recording of Rabbits Motel?

Woody: It was a whole new process. We spend 10 or 13 days up in the woods at the beautiful Peachfork Studios. There were two houses, one was the studio and the other was where we stayed. Basically, every day we went up to the studio and immersed ourselves in the songs. Sometimes we would forget to eat. There wasn’t even a cell phone signal.

How collaborative was the writing and recording with your bandmates?

Woody: I mainly write with my friend Felix when we are on tour, as well as and on my own. I love writing with other people too. It is fun to see the life a song can take on once you let it go. With the recording, I worked with a few other musicians on the record but on a lot of the songs I played all the instruments. That was a whole new process as well.

Even though I write most of the songs, and curate the traditional songs we do, we all bring our own touch to the sound of the band. Every time we play a song, it evolves. We’re always trying to push the peeks and valleys of each performance. We play with a lot of guest musicians and other bands too and it is always interesting to see where someone can take piece of music.

What would you say sets Rabbits Motel most apart from your previous work?

Woody: Rabbits is completely different from the other records. It seemed like there was a great freedom this time to make any kind of music and include any instruments we wanted. There was a set of drums, Hammond B3, vintage electric pianos and guitars, and guitar amps. Some of the arrangements were made right there in the studio. We were literally in the studio for 14 or 15 hours at the time, just hanging out. The studio was way out in the woods, so there was nothing else to do. We kind of hid out up there like a bunch of bandits.

What have you been inspired by lately?

Woody: I’ll tell ya Chris, musically I have been having a blast hanging out in Nashville and hearing all the incredible local bands that play all through the week. I know there is a lot of really terrible country music coming out of that town, but there is also an incredible community of musicians, songwriters, and performers playing every night of the week.

I feel lucky to travel a lot lately with our overseas tours. I’ve been making time to visit friends in some of the most amazing cities in Europe, and I am constantly inspired by meeting people and hearing people tell their stories of survival.

Woody: We have a busy summer touring for Rabbits Motel. We’re going back to the UK for our biggest tour so far and then back to the states for a cross-country road trip tour out to a festival in Utah. We are also arranging to have Rabbits Motel put out on 12-inch vinyl.

We’ll also be playing a bunch of great festivals including the Bristol Rhythm and Roots Festival in Tennessee, Groove Fest, Whispering Beard, and the Shetland Island Festival.

Thanks for taking the time to participate in this interview and discuss your new album. I hope that this gets more readers to check out Rabbits Motel and your other records.

Woody: I’m glad you like the record, and I am really excited to hear what people think. We are playing in Philadelphia in a few minutes, so I gotta run!

Listen to Woody Pines’ new record Rabbits Motel, and learn more about his touring schedule via his website woodypines.com