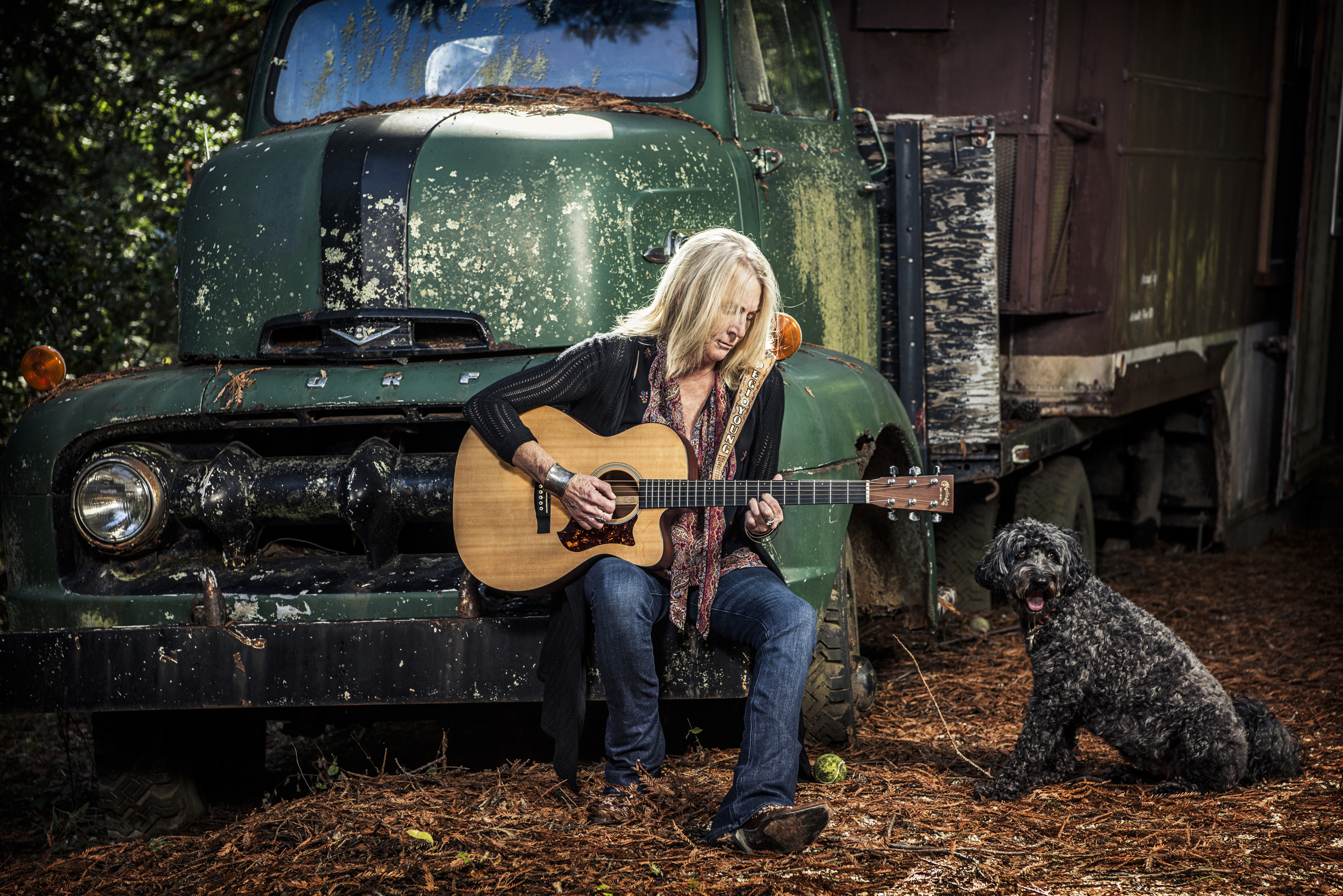 There’s no more apt summary for Pegi Young’s newest album, Raw, than the title itself. An honest songwriter through and through, she didn’t pull any punches when she faced grief head-on following the life-altering news she received in 2014: Her husband Neil was filing for divorce. The 12 songs that resulted from that kind of hurt — recorded with her band, the Survivors — move from the accusatory “Why’d You Have to Ruin My Life?” to the bare “A Thousand Years.” An electric blues guitar accentuating the latter reflects her bruise, still purple and tender, while she tries to parse out what reasons might exist for this change of heart. “Took a sip of her leftover tea. Thought about her new reality. He’s in her children’s faces. He’s in her heart and soul,” she sings, her voice edging near despondency.

But while Young allows herself to linger in the hurt, anger, and shock that defines the first half of the album, she doesn’t stay there. This is no bitter pill, but a reflection gazing outward and inward. And for all the clichés about strength that follow from such tragedies, there’s something to be said about finding the fortitude to simply get up, get out of bed, and begin the act of self-discovery once again. On “You Won’t Take My Laugh from Me,” the way Young pronounces “laugh” comes close to making a larger proclamation: “You won’t take my life from me.” While 2014 left her with different endings than she anticipated, she’s found ways to forge new beginnings. Raw ends with two covers, Nancy Sinatra’s “These Boots Were Made for Walking” and Don Henley’s “Heart of the Matter,” notes of independence and forgiveness, both of which Young applies to herself, as well as to her situation. There’s a reason she runs with a band called Survivors and, with her newest work, listeners can see why.

When did you realize you needed to write your way through this hurt?

I’ve always written, so I started writing pretty quickly. That was about all I could do for a while. I was pretty frozen. Thank goodness I had that — and have that — as an outlet.

But, from a creative standpoint, tragedy can affect output since our drive to create is so often so tied energy, motivation, etc.

I didn’t have songs per se, but I had loads of words. We went on a little tour, and then we lost our bass player, Rick Rosas. A lot of losses in 2014; it was pretty rough. Spooner Oldham and Kelvin Holly and I went back to L.A., and we holed up in a hotel room. That was in early 2014, and that’s when my words started to take the shape of songs. It was a real collaborative process. I’d never done that specifically before. I usually came into the studio to present what I wanted to try, but I’d have a skeleton of a melody. In this case, I didn’t have anything. I just had these words. I didn’t play a note on this record. I went into a depression so I didn’t play — I didn’t do a lot of things that I previously enjoyed doing — I had to climb my way out of a pretty significant depression.

That actually reminds me of what British folk singer Shirley Collins experienced after her husband left her — she lost her voice. Have you managed to find your way back to your instruments again?

I have. Yeah. We just came off a tour, and I played guitar on some songs. I have a couple of pianos here in my house. I took piano as a little girl, so I understand the keyboard in ways that I don’t really understand the guitar neck, even still. I know chords, but if I don’t know, I fish around and find something that sounds good, and bring it to Kelvin and say, “I don’t know what this is …” and he translates it for the rest of the band. My chords are a little odd, you know. [Laughs]

How lovely that you have a translator!

Oh, he’s terrific. He, in many ways, is our bandleader. Everybody’s got their niche. Our newest Survivor is Shonna Tucker.

I was so excited to hear you’d brought her into the mix.

A dynamic bass player, just really cool. Rick Rosas left some really big shoes to fill, and she stepped in, and I think he would be pleased. Plus, she’s got a beautiful voice, so her harmony vocals with me are just terrific.

What has it been like playing these songs live? Has it felt empowering?

I cherry-picked which ones I do live. Some of them are dated to me now. I liken the record to the stages of grief, but I didn’t think about that when I was writing. It takes you through — at least I believe, and I hope it translates that way to others — the journey with me. And it’s not just my journey. A lot of people go through loss and grief, whether it be from divorce or death. It’s part of the human condition; the Buddha says suffering is the first noble truth. It starts off with what may appear to be an angry song, but I look at anger as a very secondary emotion to deep hurt, so that’s where that one came from, and we don’t do that one live anymore. That feeling has gone so far into the past that I have trouble conjuring that one up. We stick with some of the other ones on the record that are more reflective. I think the record ends on a note of forgiveness.

When you talk about some of the earlier songs being angry, were you ever concerned or aware about playing into the stereotype of the scorned woman?

Well, I think that goes back to what other people think about me as being none of my business. It’s music, you know? I can’t control how people receive what I put out. I just put out what feels honest and true to me, and then how people interpret that is completely out of my control.

And the album title so perfectly summarizes your perspective anyway.

Yeah, we were pushing around for a title, and hadn’t come up with one yet. I was listening to the work we had done on a drive today — I love to listen to music in my car — and it just came to me. This record is very raw. There’s no sugar coating how I feel in this record.

I appreciate that you don’t shy away from being candid.

It took over a year to make the record. Luckily, when I was stuck and in the depression that I talked about earlier, it didn’t last. Ultimately, I believe — for me — I had to get up out of bed. I had to stop saying, as soon as I opened my eyes, “Oh, when will this day be over?”

How did you begin discovering your own strength again?

We are in control of our own happiness. Ultimately, with the help of my family, my kids, my professional support team, my friends, my siblings, everybody was there rooting for me and that really helped a lot. I had to get back up and start putting one foot in front of the other and get on with it, and ultimately accept what’s happened. Maybe not understand why … or understand fully why, I should say. In a long-term marriage, there’s always bumps. I was looking at this couple, they were in their 90s (it was an online thing), and it was “What’s the secret to your long marriage?” The man said, “A sense of humor,” which I’ve heard many many times and I agree with that, and forgiveness.

I know, but this is something no one expects to have to forgive when they get married.

Well, look, I’ve focused on forgiving myself, because there are always two parts. It’s never one person’s fault that a marriage doesn’t make it. There are things that happen in the course of a marriage, and there’s equal opportunity to take responsibility for not making it. Well, we made it to a finish line. I’m not blameless. I have to work on my own part and, in doing so, I think by forgiving myself it will definitely help in general with forgiveness all around.

It reminds me of a line you have in “Obsession” off your last album, Lonely in a Crowded Room: “It takes patience with yourself.” I’ve always appreciated that sentiment.

Does it get easier?

It might be a life-long work in progress. We can all be kinda hard on ourselves. I know I tend to be really hard on myself. I strive for perfection, perhaps, but I know I’m just a human being, and we make mistakes, and we try to correct the course, and we try to do better, and that’s all we can ask of ourselves, I think.

Absolutely. You have to be kind to yourself because there’s so much expected of everyone.

And maybe women more than men, I’m not sure, because I’ve only inhabited a woman’s body, but I think maybe it’s just part of societal expectations. I’m almost in my mid-60s, and there were certain expectations placed on us. My daughter, for instance, I think she’s fairly representative of this newer generation — she’s in her early 30s — and there’s not the same expectations placed on her, in terms of roles and who does what, and how we’re supposed to be the nurturers and the caretakers. That’s a lot of work trying to take care of everybody else’s happiness! [Laughs] We really have no control over it.

Right, mothers tend to sacrifice their happiness for the sake of others.

Yeah. And not worrying about pursuing your own dreams, in terms of that being selfish. The happier a person I am, the better I am for everybody around me.

No kidding. Well, on that note, thank you for what you’ve shared on this latest album.

Thank you. I’ve been receiving really positive comments from people, when we were out playing shows. The primary feedback I was getting was that, rather than the victim or the woman scorned or whatever, it was more a message of empowerment. That’s all I could hope for: to be able to share with others my journey and that you can survive it. Speaking of: The Survivors! What a name. Who knew?

You picked it before it became necessary.

We are indeed Survivors.