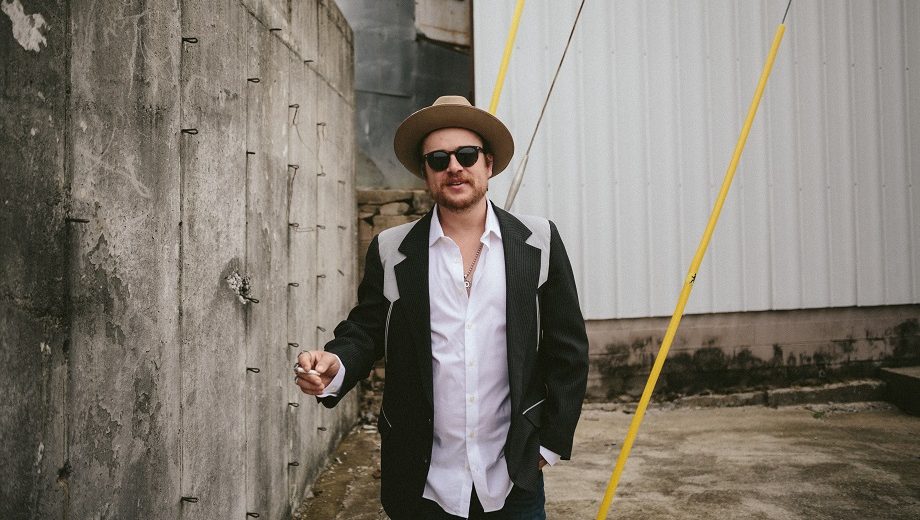 Dalton Domino had pretty much ticked off everybody he knew, prompting one friend to remark, “Looks like you’ve been exiled.” That off-the-cuff comment inspired the title of Texas musician’s rugged new album, Songs from the Exile, which he wrote in a year fueled by anger, addiction, and a desire to figure out exactly why he was making so many bad decisions.

“I have a really good knack of shooting myself in the foot, talking shit when I shouldn’t talk shit. It’s one of my biggest character flaws that I have,” he admits. “I’ve driven off a lot of people because I think that I’m right sometimes. And what that does, some people just stopped answering the phone.”

Disconnected from all but a few friends and striving to sort out his worst demons, Domino resurfaced with the autobiographical material that comprises Songs from the Exile. Surrounded by highly-regarded roots musicians chosen by producer Justin Pollard, Domino placed these hard-won songs against a live, in-the-room arrangement, which stands in stark contrast to the orchestration of his prior album, Corners. Not long after wrapping the sessions at Dauphin Street Sound in Mobile, Alabama, Domino checked himself into rehab — again.

More than once, his sobriety has helped him reconnect with his family, whose strong presence is felt throughout Songs from the Exile, particularly on tracks like “Half Blood” and “Hush Puppy.” His grandmother even kept him company as he drove from Dallas, where he lives, to Memphis, where she stopped off to see her son. Domino then detoured to Huntsville, Alabama, to catch up with his dad before swinging through Nashville for a gig and a chat with BGS.

BGS: There was a whole lot that happened leading up to this record, it sounds like.

I cut this record and I was really confused and I had a lot of questions. And it was knee-deep in self-medication with questions. There were moments of clarity and then moments of, “What the fuck is going on?” I don’t know, it was like a quarter-life crisis. But yeah, it was a weird spot. That week getting away [to Mobile], it was nice to do that. It was nice to clear my head a little bit.

So you were using these songs to sort out what was going on with you?

Yeah, man. I was just angry at stuff. In hindsight, I thought I knew what I was angry about. In the same breath, in hindsight now, the stuff I was mad about wasn’t stuff you should be mad about.

It seemed like there was a breakup that threw you way off.

There was a breakup, then it was like, “Well, looking back in my life, they always leave this way. So what did I do?” And then it led to, “It’s me. I was the problem.” I was the asshole in the situation. Not them. I always place blame on them, then that led to, “Well, why do I act this way?” And then that looped into all these other questions I had about myself. That’s where a lot of the songs came from.

“Half Blood” seems like it was ripped from a page of your life. Is that pretty much how it went, where you were in the driveway going, “This is my fault that this is all falling apart”?

I think that every child of divorce at some point thinks that the reason that their family split up is because of them. I think it’s because that always happens with everybody. But that specific story, I set out wanting to write a song about my sister. We have different moms, that’s my half-blood sister. But I took it into a friend of mine, and she was tinkering around with the idea. She goes, “You know, you guys don’t really have too much to complain about, because your family does love you despite their flaws.”

These songs are very introspective, but it seems like you wrote them with an audience in mind, or at least produced them that way.

Yeah. That’s Pollard. I was trying to work on melody a little bit more, in the actual writing process of it. I know I needed to work on melody a little bit more. So, going into sitting down and writing the songs, I knew that I wanted them to be more melodic. I think that you can say whatever you want to say and you can put a good melody on it. At least for me, whenever I sit down to write a song it’s always to share with other people. It’s never just like, “This is mine. I wrote this for me to get off my chest.”

I wanted to ask about “Hush Puppy.” Is that based on something you overheard as a songwriter?

That’s a true story. That’s about my grandfather. He had this hush puppy recipe and he would never let anybody in the kitchen while he cooked it. And we thought he was always going to be around forever. We never did think to have it. But I made sure after writing that song, I sat down and got my grandmother’s cornbread recipe because I don’t want that want that to go the way of the buffalo. But, yeah, it’s a true story. It’s about how he died. He died alone in a V.A. hospital in Memphis.

What was the response when you played that song for your family?

My grandma liked it. You know, they all liked it. Yeah, they thought it was funny. I always tell a story about him. He was a character of his own, man. He was funny. I wish he was still around. He would enjoy all of this because he loved country music. He would enjoy coming up to Nashville and seeing stuff about Johnny Cash and Hank Williams. When he was alive, I wasn’t into country music. I just kind of ignored it. I loved punk music and I still love it, really hard stuff. My grandfather would love all this.

What was it like to see your dad again?

Dude, it was awesome, man. I hadn’t seen him in about a year and a half, or two years, and it was cool seeing him again. We talk on the phone and stuff but I hadn’t seen him in person in forever. He still is the same. I’ve got to drive back to go sign papers because I bought a car. He’s a car salesman. I asked him about a certain car and he was like, “Well, let me show you one. Why don’t we just go ahead and put you in this one?” And, “You know you’re qualified for a trade-in right?” I was like, “Goddamn it.” He said, “Go to your show, I’ll have the paperwork ready.” So I got to go back down there.

He made a sale.

Yeah, he made a sale, man! He’s the finance guy though. But, man, it’s always good seeing him. I saw my little brother last night, but I’m flying him out for a big show out in Lubbock on the 31st. So he’s going to come out there. The show’s 18 and up, and he just turned 18. So I’m going to show him Lubbock. Lubbock is my stomping grounds. That’s the place where I picked out to move to, so I consider Lubbock home. It’s his first time out there, and his first time at one of our shows.

I’ve not been to Lubbock.

So for those who read about what you went through, and they’re curious about how you’re doing now, what would you say about your frame of mind and how things are going?

I feel a lot better than what I did this time last year. This time last year, I was miserable. It was weird when we started this record, a friend of mine passed away. And I had a lot more questions. This time last year it wasn’t okay. It wasn’t good, but I still just kept digging in. And finally, this past year, this January, I asked for help with all those questions that I still had from writing the record, and what I thought about over the past year. I sought treatment and got help. I guess what I’m saying is, if somebody comes across this and hears this story, all I can say is, if you’re going through some shit, it’s OK to ask questions. It’s OK to feel bad, but go get some help. Help is out there. Help works.