Del McCoury: Whatever Suits the Song 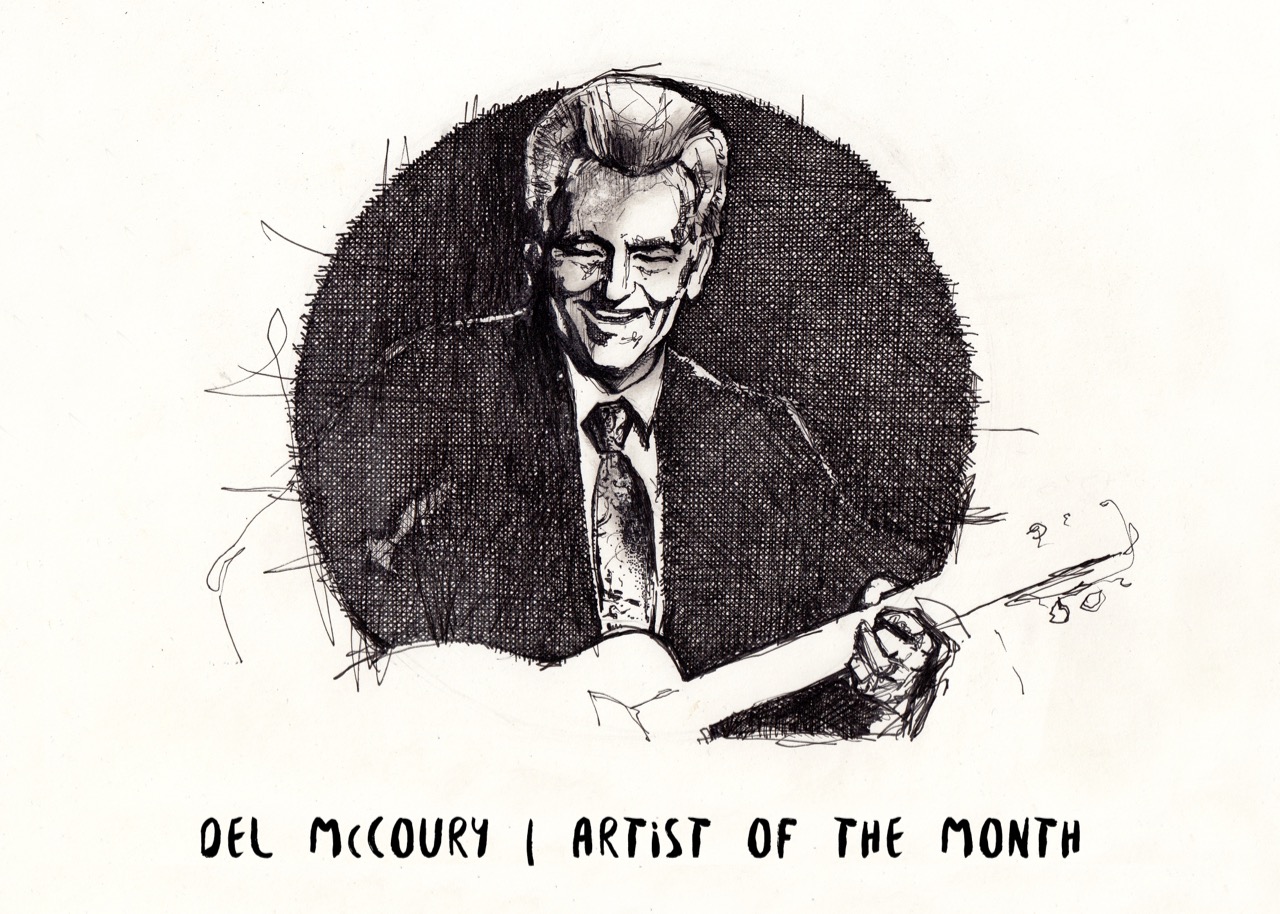 There are three things that you need to know about Del McCoury before anything else: His hair is incomparable, he giggles almost ceaselessly, and he still sings bluegrass.

Fifty years ago, after ending his stint with Bill Monroe’s Blue Grass Boys as lead singer and guitarist, McCoury released his debut solo project, Del McCoury Sings Bluegrass, with his now-iconic pompadour coiffed proudly and precisely on the cover. The album was released on Arhoolie Records, whose founder and proprietor, Chris Strachwitz, produced the album, phoning the young McCoury barely a day before the session to offer him the deal. Because of the severely short notice, the band was cobbled together from whomever was available and the songs chosen from whatever Del knew: A lot of Bill Monroe material, plenty of traditional bluegrass, and some old-time country, too.

Since those days in the late 1960s, songs have been the most significant driver of McCoury’s inspiration and creativity all along. “In the early years,” he remembers, “my producers would bring songs to me and I would usually just do them, even though sometimes I didn’t really like the song. As time went by, I got to thinking, ‘I’m just going to record songs that I like, instead of doing everything [anyone] brings to me.’ I figured I’m the one who’s going to have to sing these songs!”

It’s this love for the songs themselves that has informed his entire career, sculpting the iconic McCoury style that can be detected through each and every one of his albums. It’s remarkable that he’s been able to sustain such a particular, tangible musical identity over the decades without it ever growing stale or cliched. That identity — innovation balanced with tradition and overlaid with melody-focused, virtuosic picking, while centered on soaring, high lonesome vocals, all accomplished with a wink and a smirk — doesn’t always come from overt attempts at consistency. “I’ll tell you what it is,” he says in a tone that foretells that this is not some ironclad secret. “It comes down to, simply, I just record songs that I like. It’s hard to say where they’re going to come from. … I don’t think about if anybody else is going to like it when I do it. I just think about me having to sing it.” And as far as production and arrangements? That’s no proprietary recipe under lock and key, either: “But really, it’s whatever suits the song.” Whatever he’s throwing into the pot, it is downright delectable on McCoury’s brand new album, Del McCoury Still Sings Bluegrass.

Thank goodness that he does. If his signature chuckle, a constant as he tells stories and discusses the new record over the phone, wasn’t indication enough, Del has always been a beacon of joy in bluegrass communities. From the first second of track one, the slightly silly, totally burning, almost-a-love-song “Hotwired,” through a high-speed Alan Jackson cover, a classic fast waltz, yes, a train song, too, and another couple of handfuls of carefully curated material, that joy is palpable. It’s a striking through line that stems first from his absolute adoration of just doing the thing. It’s a love he’s always had. “In the early days,” he says, “When I was playing bluegrass festivals, we’d stay up all night, play all night, and go and do a show the next day in the afternoon. I had that much interest in it that I could play night and day and never stop. When you get older, you can’t do that; you have to pace yourself. But I still have that interest, I really do.”

Even casual observers would not note McCoury’s current clip as “pacing oneself.” He’s a member of the Grand Ole Opry and a Bluegrass Music Hall of Fame inductee, he tours nationally, he hosts the radio show Hand Picked with Del McCoury on SiriusXM’s Bluegrass Junction, and he presents an annual roots-music-festival-meets-family-reunion, DelFest, in Cumberland, Maryland, every May. All of that notwithstanding any current album release cycles and press junkets he may be running. While plenty of other artists with such long, successful careers would be pumping the brakes, Del is still looking ahead. “I just never lost interest in it. I never lost interest in recording records and entertaining folks. It’s something I love to do.”

And the folks love him back. Whether listeners come from the most staunch camps of bluegrass diehards, or from hippie festivals and jammy string band gatherings, or symphony halls and performing arts centers, they all count Del as one of their own. The rarity of that fact is not lost on him. “[That’s why] when we do a show, we never have a set list. We figure these people paid to see us, so we’re just going to do what they want us to do, we’ll see what they want to hear. It keeps me enthused, the audience excited, and also the boys [excited, too.] And the audience never know[s] what we’re going to do. ‘Cause I don’t!”

By choosing to record and perform material that he connects with personally, he’s passing down that care and respect for songs to every one of his audiences, who, in turn, learn to appreciate and then reinforce that care. So, when a song comes along on Still Sings Bluegrass that includes an extended, rip-roaring electric guitar solo (in this case played by Del’s grandson, Heaven), or when “To Make Love Sweeter for You” kicks with a jangly upright piano, you don’t hear the predictable, “that ain’t bluegrass” balking. Furthermore, the traditional, straight-ahead policers are visibly absent from DelFest, where more fringe, jammy acts like Trey Anastasio and The String Cheese Incident are just as likely to appear as Larry Sparks — or Tedeschi Trucks Band. And whether he’s recording a set of songs such as this fresh crop, curated by the man himself, or lending his voice and his band to projects like Del and Woody, an album of unrecorded Woody Guthrie songs, or American Legacies, the New Orleans-meets-Nashville, jazz-meets-bluegrass, Del McCoury Band-meets-Preservation Hall Jazz Band crossover album, his footing within bluegrass never falters and is rarely challenged.

Del doesn’t believe there’s a secret antidote to the signature, absolutist trains of thought some find in bluegrass and he clearly says so. When asked why he thinks his fans might let him off the hook he laughs, “You know what, I’m afraid they’re gonna let me go any minute!” But we know this isn’t true. Now more than fifty years into his song-led career, Del’s creative vision has never been so clear, his perspective never more innovative, his hair never more enviable, his laugh never so charming, and his music never more joyful.

No matter how that ends up sounding from the stage or through the speakers, by definition, it’s still bluegrass.