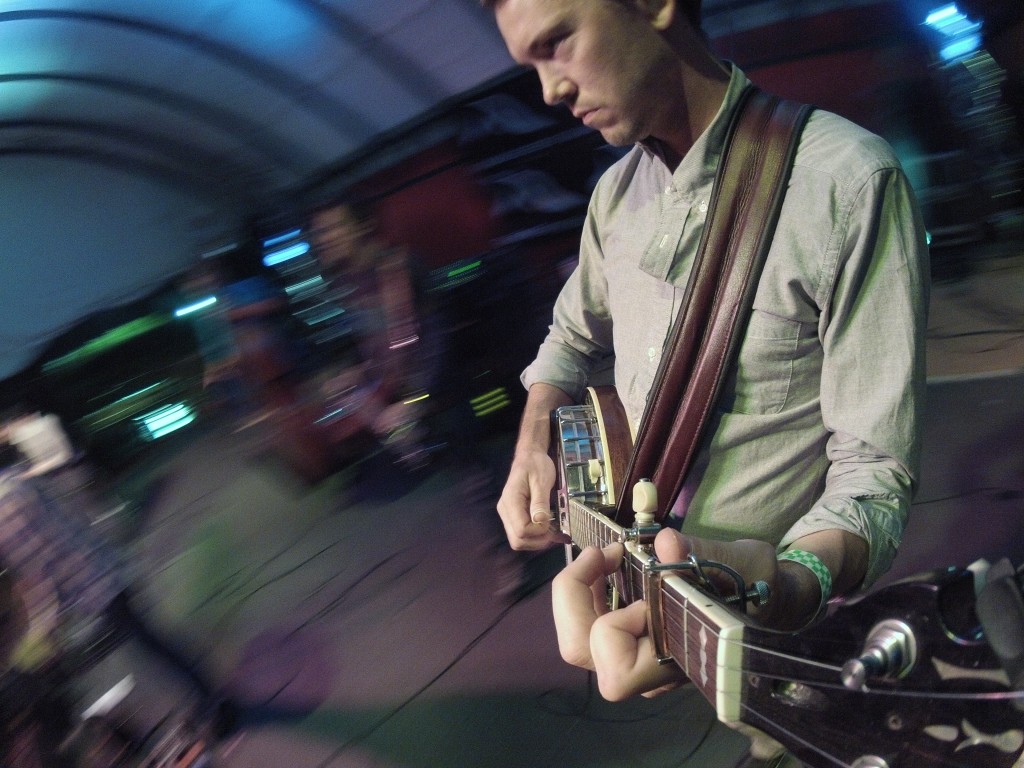 When Chris Pandolfi took to the stage at last night’s IBMA Awards in Nashville, he was ready to take things a little off script.  ‘Presenting an award in T minus 45 mins. I plan to throw a wicked curve at the teleprompter operator.‘ he Tweeted from backstage.  Really, though, that’s how the Infamous Stringdusters’ banjo man seems to live his life: a little off script.  Panda’s not one to play by the rules, even though he understands them thoroughly.  Take for instance his band’s annual festival, The Festy, which launches it’s third year in Nelson County, Virginia next weekend, October 5-7.  Unsatisfied with the structures and lineups of other music festivals, Chris and the ‘Dusters set out to create their own take on the festival experience.  Or consider Pandolfi’s blog, where, after writing his Bluegrass Manifesto in April 2011 about the shifting state of the genre, brought the hot topic to the tip of everyone’s tongue.  His decision to face the debate about The Future of Bluegrass head on lead him all the way to the keynote speaker podium at last year’s IBMA conference.

And to top it all off, Chris also has an excellent and eclectic taste in music, as evidenced in his contribution for The Sitch’s latest MIXTAPE…

‘These guys blew up when this album came out, but it took me a while to really get into it. Something clicked and I just fell in love with their sound, rich with reverb and rambling gang vocals. It all sounds so grandiose, not to mention the song, which really takes you on a journey through a number of real dynamic changes, but it really works. I love them because they sound like a band really following their own muse.’

Track:  The Weight
Artist: The Band

‘When Levon recently passed away, we all dusted off some old Band material. This song just gives me chills once it settles in and Levon starts to sing. I can’t think of a more perfect group of musicians than these guys. We are lucky that they found each other. The body of work they left behind is really pure, like the sound of American history or something like that. I love all their music, and this tune is not an obscure one, but it’s just so perfect.’

Track:  Feel It All Around
Artist:  Washed Out

‘Ernest Greene (aka Washed Out) has a really cool thing going on. The name fits the music well, with it’s washy, wooly quality, reminiscent of an earlier era especially in its production value. His songs are so simple and catchy, but they set a great vibe and fill the air in this amazing way. I love his music.’

‘Bill Evans is my favorite improviser ever, and I always come back to his music especially if I want a good jazz fix. This album is one of my favorites, representing the other-worldly trio that Evans did a lot of work with (Scott Lafaro and Paul Motion). It’s insane how well they play together, and on top of it all is Evans’ beautiful and fluid piano playing. His improvising is so stellar–always so full of thought and feeling, never a misused note.’

‘These guys are a really unique band–cool songs with lots of unique production ideas. Two of the three guys are heavyweight producers so the dynamics and sonic properties really move around a lot. A lot of their tunes are pretty dancey but this one is real mellow, featuring some cool vocals from Lykke Li. I love the dreamy vibe and the simplicity of it all.’

For more info on The Festy, visit www.thefesty.com.  You can learn more about Chris Pandolfi, his music, and his other activities through his blog, chrispandolfi.com