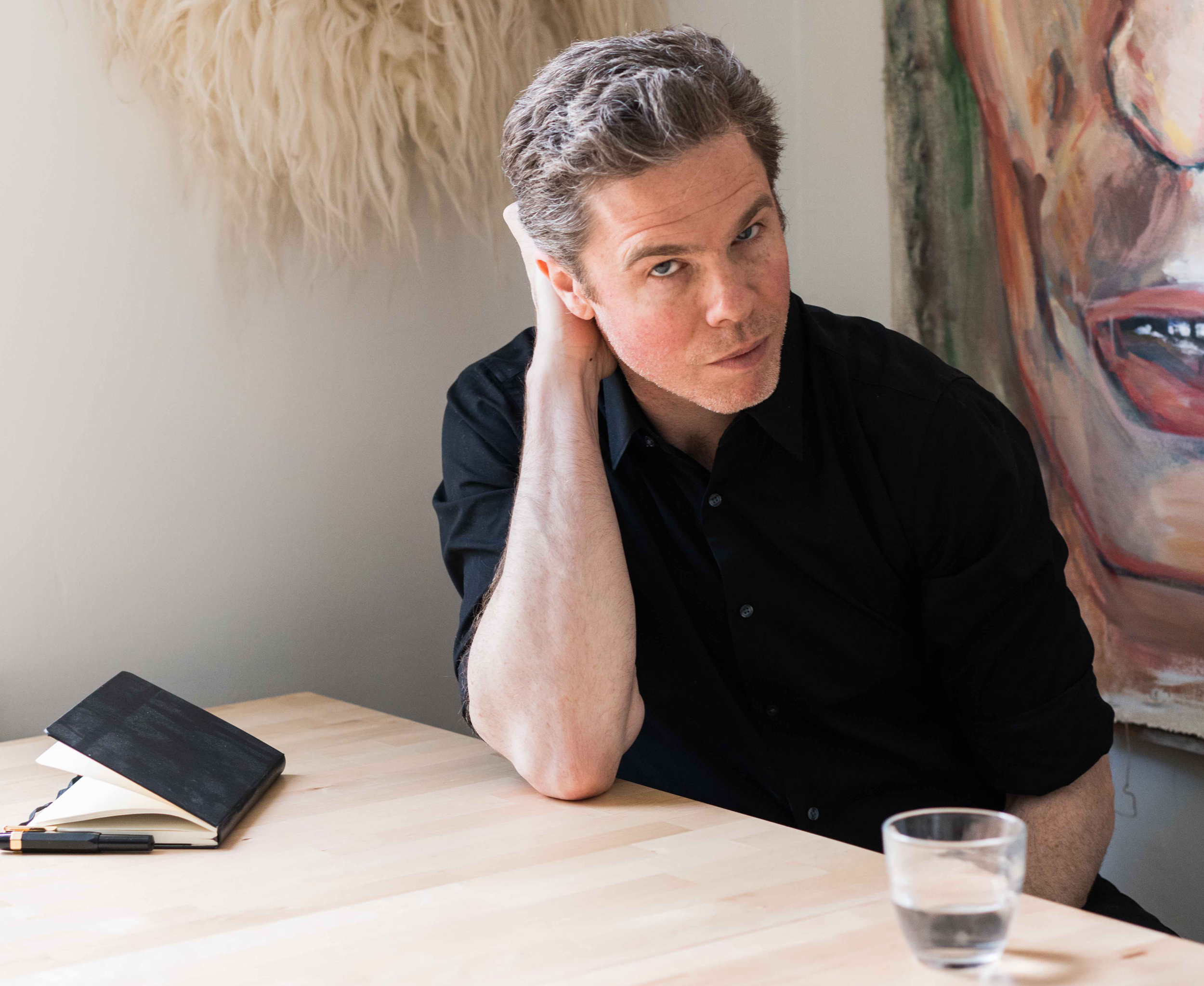 Josh Ritter is, at his core, a wordsmith. His proclivity for words — for their exactitude, potency, and even magic — comes out in his lyrical prowess. He not only summarizes an experience with perceptive poetic force, but also heightens its impact with clever rhythmic structuring. It’s why when he sings “Our love would live a half-life on the surface” from his apocalyptic love song “The Temptation of Adam” (off 2007’s The Historical Conquests of Josh Ritter), the line delivers the linguistic equivalent of a gut punch for anyone who has known the kind of love that cannot survive its own origin story. When choosing the name for his newest album, Gathering, Ritter had storms in mind, but of course the meaning didn’t cease there. The homonym touches on many interrelated themes, but at the album’s crux lies a reckoning. As he enters middle age, Ritter gathers together his many parts in order to see who he is, why certain behaviors from his youth still threaten to explode his world, and what to make of being a man at this present moment.

As Gathering explores these different pieces, Ritter amalgamates an array of musical styles. The opening “Shaker Love Song (Leah)” feels hymnal, but he doesn’t stay in that reverent moment long. Instead, he jumps to “Showboat,” a blues-tinged soul-pop number that juxtaposes the artifice of masculinity with natural imagery. Then there’s the spoken word-influenced “Dreams” (replete with a spine-tingling piano riff), the soothing “When Will I Be Changed” with bard Bob Weir adding his balm-like voice, and the country-leaning “Feels Like Lightning.” Gathering is undoubtedly a hodgepodge, a shattered mirror refracting Ritter’s various and moving parts, all of which still frustrate, still confuse, and still excite him. At an age when conventional wisdom says people are supposed to have it all figured out, he instead throws himself into the act of questioning. Ritter has summoned something with Gathering: an attempt to dismantle those myths — both personal and otherwise — that loom over the horizon.

You begin with “Shaker Love Song” which, in a way, feels like an incantation. What spirit did you hope to invoke for this album?

It’s based on a traditional Shaker hymn. It’s one that’s been in my head since, maybe, 12 or 13. I don’t remember where I first heard it; it was just one of those songs that used to be in the American bloodstream. I think what I wanted to convey, as I go back now and listen to the record, is a real sense of calm. I feel like it’s important to show the moment before, and then things can smash in.

It has a sense of the sublime about it, like watching something really dangerous from a safe distance and being able to witness its beauty.

That’s really interesting. I think of sublime, too, as in right before you go over the waterfall.

Storms played a large thematic part in this project, but in terms of “gathering,” there are so many other meanings. How do you think those definitions wove their way into your songwriting?

It’s always an interesting moment when the record is done and I’m sitting there figuring out what order the songs are going in. I really like that moment, and it’s usually where the title will start to appear. Sometimes with records, the title comes right at once. It’s an idea. Other times, you sort through names and you’re waiting for something. Usually, the title comes out and it blazes into your mind. With Gathering, that’s how it was. I remember somewhere along the way reading and the word lit on fire for me. It’s an old, magical sounding word. It feels ancient: The gathering of storms, or gathering yourself together, or gathering like an anthology, or when they say “daydreaming,” kind of wool-gathering. I loved all those things and they came together with the title.

It makes sense, given your proclivity for writing.

When the title’s right, it’s a great feeling. It feels, for me, like the final moment of a record is when you give it a name.

So you still get light bulb moments from language? That hasn’t been dulled in any way?

I don’t know why this works, but it makes sense to me. It’s the magical side of writing.

Right. I think I’m possibly projecting here in how technology or the constant exposure to language via social media has seemed to strip them of their power, or at least their impact doesn’t feel as potent.

The great thing about writing is, it continues on through all these different modes. It’s such an exciting time that words can still be magic.

Indeed. I think we need it more than ever.

Yeah! And it’s there, and songs are part of an oral culture. It’s beautiful. For me, the songs — not my own, but people whose music I love — I carry with me in a way I can’t carry around a book. Songs are such spells.

If we’re talking spells and myths pertaining to the word “gathering,” what of your own myth-making are you still reckoning with as a songwriter?

I would say that the prevailing myth — the big thing that is always unfolding itself beyond the whole idea of the human condition — is the condition of being American now. What is it to be American and to live in a country with such huge myths of its own, and strange desperate history as we have? I think that is a deep well to draw from and one that I’m always going to. Within the big American idea are so many myths and stories and jokes and sadness. It’s immense.

It is. I could see how it comes out especially on “Showboat.” It’s this fascinating negotiation with masculinity that relies on nature to achieve that façade.

It’s from Shakespeare. I think it’s called the “pathetic fallacy,” when the natural world takes on elements of human emotion: The idea that the eclipse is an omen. I love that stuff.

Do you find yourself navigating different ideas of masculinity within the American myth?

Oh, yeah. Masculinity is something that you’re continually trying to understand. I am tremendously lucky and privileged. Becoming a father and becoming a partner — all these different facets of myself — and, with them, come along the insecurities that I can all too easily see in myself. As much as you claim to never try and write from autobiography, it all comes from me. The big talking and all that stuff is something I can look at with a jaundiced eye, but I understand it all too well. I understand the other side of it. It’s a funny thing.

Did fatherhood, in any way, soften your penchant for speaking so candidly?

I wouldn’t say it softened it. It’s honed it in a lot of ways. Suddenly I have a daughter who will almost be five and, in a way that I wouldn’t when I was 25, I’m looking at the world as one my daughter’s going to have to negotiate. What’s going to be her experience in this world? And what’s my responsibility toward making that a world as positive and good and supportive a place for her as I can? And not just within my family, but within larger culture. That feels very personal to me in a way that things haven’t always. I think that comes out in the songs.

You mentioned, as an artist or public persona, creating a world where there’s space for her. How have you tried to do that?

As important as it is for me to be myself when I write, it’s important for me to stand up for the things that I believe in. As a songwriter, I’ve grown up in the shadow of some huge historical figures, like Bob Dylan. The idea of being a cipher at a time like this, and the idea of not speaking out at a time like this — especially from a point of having something to say and having a platform to say it — it strikes me as you’re kinda missing out on a big part of letting your personality out. This is who I am. I found I have so many strong beliefs these days, things that I would really fight for, ideas that I’m trying to live with. I believe it’s important to speak and act.

Yeah, it’s not a time for weak beliefs anymore.

It’s a strange moment, but I think all the more exciting for its potential. Before we end, I have to ask about the Bob Weir collaboration. Did he provide any insight into that central question you pose, “When will I be changed?”

I grew up around hymns. I was raised in a very religious family, but I don’t consider myself to be a conventional believer anymore. I thought, “There’s gotta be a song for that moment when you’re hoping for transcendence or you’re hoping to become the person who’s good enough to find your way back home.” That’s what the song is about, and when I finished recording it and I sat with it for a while, it wasn’t quite done. It lacked something. Working with Bob on all these songs for his record, I so immediately fell in love with his voice and his experience and thought, “If Bob would sing this song, it would give it that emotional depth.” He’s amazing to work with; he’s so much fun. Getting to be there while he’s creating something is incredible. I’m really excited to work with him when we get the chance.

It seems like it’s myth-making for your own personal legacy.

It’s amazing to work with somebody whose music is really in the American water.