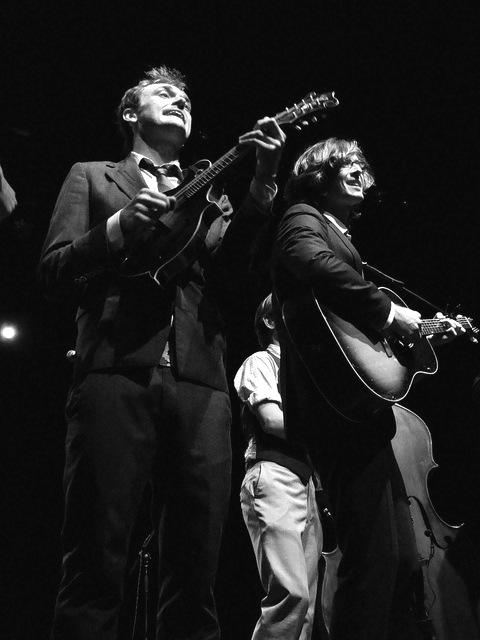 It is difficult even to discuss Punch Brothers. Best attempts at classifying the band by genre result in multi-hyphenated neologisms. Try hyperbolically overstating their proficiency, merely for effect, and you’ll still come up short. They’ve quite literally outgrown their instruments’ traditional sonic capacities, and often resort to banging around on all manner of unintended parts of the things to recreate the sounds in their heads. They’ve turned the traditional into a powerful and moving spectacle. They are masters, educators, and inventors. We would all do well to pay heed.

But this winter we found Punch Brothers at the end of their collective rope. They’d been hanging on to it for the best part of 18 months, touring constantly since before the release of their latest full-length, the rhetorically titled, Who’s Feeling Young Now? They, clearly, were not. And ‘Brothers’ had become a more apt descriptor by Thanksgiving of 2012 than they could ever have intended when they assigned themselves the moniker five years earlier. I have a brother. I have a wife. I even have a band mate. I have not spent as much time with any of them as the Punch Brothers have spent with each other, as they put it, ‘living in a hallway.’

The hallway is, of course, a tour bus. There are televisions, leather couches, game consoles, dvd players, a kitchen. As hallways go, it’s the top of the line. Musicians (like me) idealize the prospect of some day touring in a bus. But make no mistake, it is merely a top of the line hallway. At least eight people live in it 24 hours a day and there is nothing ideal about it at all. More than once, more than one of the band members volunteered that our joining the tour had offered a needed respite from the physical and emotional claustrophobia they’d grown weary of (I took it as a compliment). All of them spoke with a distant longing about the opportunity to pursue their vast other musical interests between the end of this Punch Brothers album cycle and the start of the next. They love each other deeply and desperately needed to be apart, finally.

It is no small feat, then, that all 5 members summoned nightly the genuine inspiration, indeed the revelation, necessary and intrinsic to their performance. A good deal of their show is improvised – actual real-life creativity happening before our eyes. Those parts never fell flat. Not ever. Neither did the well-orchestrated sections. Even the songs they played every night, ‘Flippen’, ‘Movement and Location’, ‘Rye Whiskey’, felt as though they’d only just been invented, yet somehow already perfected. I shared the audiences’ astonishment at the depth of the achievement unfolding before us.

What I was happy not to share, to keep all for myself (until now, I suppose), were those times before our own opening set when Chris or Critter would trade songs with us, ready to let us lead or follow as the moment asked; the end of each night when we’d share in a fine rye or wine, and they seemed more interested to know our story than in sharing their own; the moment after soundcheck when Chris, after declaring his love of late-night cocktail-driven critique sessions with those musicians he considers his peers, invited my critiques and then offered up his own in return – both of us alternating our blunt criticisms with effusive points of praise, of course; the moment in the airport before the flight home when I found Gabe eating the ‘best airport food in the country’ (he would know) and ready to share his disappointment in, and resolve in the face of, criticism that their ‘bluegrass’ group doesn’t adhere enough to the tradition it draws upon – he’s not interested in building a museum, thank god; and the moment when Critter privately proclaimed that virtuosity is a means, not an end, and that in the end, we’re all humbly aiming for what’s true and beautiful and you don’t have to play that fast to get there.

Before we met them, I wondered how on earth Kenneth and I, brothers by now in our own right, could presume to take a stage before Punch Brothers and attempt something resembling a flatpicking folk show. Who would dare? But the members that make up their band are, above all, powerfully generous musicians and people. That is what has held them together these months and years. That is what held us all together this winter. That, in the end, is the most impressive thing about Punch Brothers.

Joey Ryan is one half of The Milk Carton Kids.  Their new album, The Ash & Clay, is out March 26. You can learn more about the troubadours at their website themilkcartonkids.com.