DISPATCHES: On the Road with Town Mountain 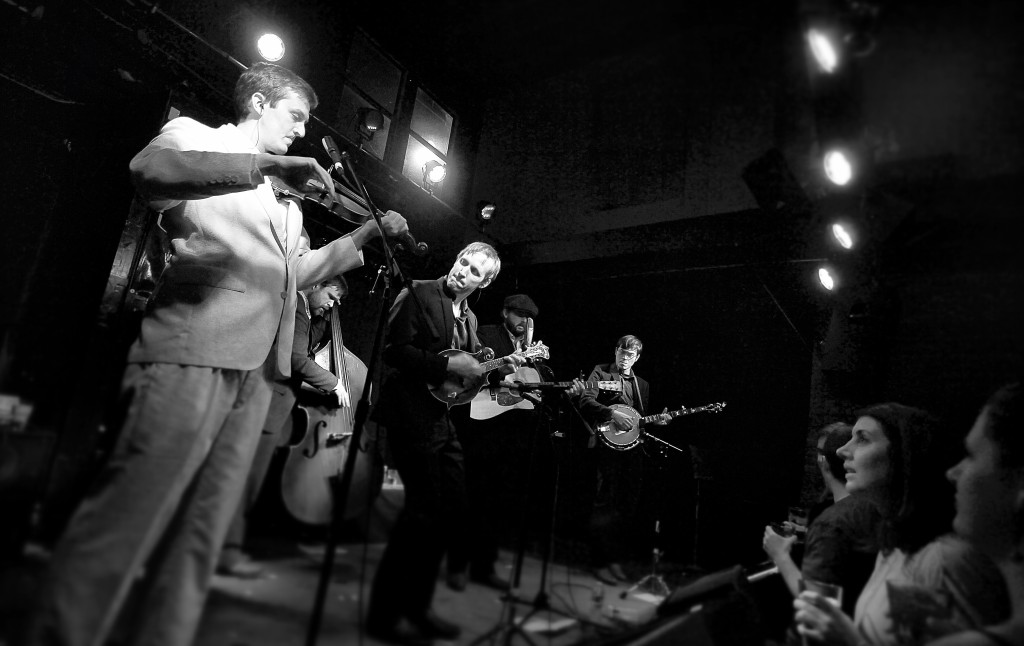 Rarely do we find ourselves in a situation in life when we are without responsibility, without plans; just straight up raw bones on the road.  I have been lucky to have spent the last few months bumming rides, surfing couches, and playing bluegrass music from coast to coast, wandering from weddings to bonfires, with over 75 different musicians by my last count.  I did one run back in February where I hit five states, eight different venues, and played with over 45 different people in a 10 day span.  Needless to say my recent commitment to music and to enjoying my life at all costs seems to be going well.  I am putting that college degree to good use.

Jump back five years where I’m working on a flat lawnmower tire in the garage by my parents’ house in Bourbon County, Kentucky with a burned copy of a record I don’t even know the name of.  All I know is its been a long hot day on the farm, I want to go fishing, and I really like the music coming out of the dust covered jimmy rigged CD player.  After fixing the tire I sit for a moment surveying the Kentucky Bluegrass landscape, taking a swig or two (which hits home rather quickly after being in summer heat all day), and say to myself ‘I like this band.’

My friend had given me a copy of Town Mountain’s ‘Heroes and Heretics’ and I was particularly drawn in by the way this band was blending the traditional bluegrass I grew up on with a modern sound an undeniable dose of real raw drive.  Bluegrass music can be played technically by anyone from all over the world, but I’ll go ahead and say there’s something about having it in your bones that makes a band like Town Mountain sound honest.  Just recently the boys played at Willie’s Locally Known in Lexington, KY and there was a good 45 minute period where hardly 30 seconds went by with out someone screaming out in excitement.  It felt like I was listening to an old Stanley Brothers bootleg, except I was the one doing the hollering.

After working on my family’s farm for several years after college, I decided to start a music venue in Lexington, Kentucky in 2012.  One day I got an email about booking Town Mountain.  By that point I was much more familiar with the band but I hadn’t had the opportunity to actually see them play live.  There are times in life when you meet someone and instantaneously you are friends; and it only took a few times being around the guys from Town Mountain that I felt like I had known them forever.

The last month of my life has been spent mainly in the back of Town Mountain’s van, at banjo player Jesse Langlais’ house that he shares with bass player Jake Hopping, or helping mandolin and vocalist Phil Barker work on his new ‘Mega Deck’ overlooking the Blueridge Mountains in Asheville.  What I’ve come to learn by spending time with the band is that they share a deep reverence for the players and singers that are the foundation of bluegrass music.  Although sometimes late at night driving back from a gig ‘Purple Rain’ might come on the iPod, most of the time you’d be more likely to hear The Gillis Brothers, early Stanleys, or a live recording of Town Mountain that they are poring over in pursuit of their craft.

Town Mountain is lucky to have the songwriting talents of Jesse Langlais and Phil Barker, and lead man Robert Greer contributes tunes as well such as ‘Up The Ladder,’ on their 2012 Pinecastle release ‘Leave the Bottle.’  The blending of the band’s songwriting with Greer’s strongly original and authentic delivery makes me believe what they are saying.  Add Barker’s harmonies and you’ve got a seriously tight vocal blend.  Bobby Britt’s fiddle playing is world class.  After getting to know Town Mountain, I am glad to say that these fellas aren’t putting anything on when they sing and play.  These songs cut to the core of who they are and the lives they are living and they are able to deliver them in a tight, well arranged package of Bluegrass music that I find exciting to hear in the year 2013.

In the spirit of blending traditional bluegrass instrumentation with modern musicality, Town Mountain has continued to develop with their cover of the Bruce Springsteen tune ‘I’m On Fire.’  And they make it sound like the Boss’ words came straight our of Appalachia.  Needless to say, Town Mountain is the real deal.  See y’all down the road.

Stay tuned to The Sitch for more of Arthur’s recaps from the road, and monthly covers from the TOWN MOUNTAIN crew.  For more info on the band and their latest album Leave the Bottle, visit townmountain.net