Dori Freeman: From Appalachian Roots to ‘Every Single Star’

Dori Freeman has been hurt and felt torn. We know because she’s told us so, always with unblinking frankness in crisp pop songs with deep Appalachian roots. But even if we couldn’t understand her words, we’d hear the pain in her soprano, which rings out with melancholy strength only gained from living.

In her new album Every Single Star, the Galax, Virginia, native pushes her blend of familial mountain grit and mid-century-inspired polish even further into its own creative territory. Never one to shy away from truth, Freeman writes about motherhood, expectations, and relationships from a distinctly female perspective.

BGS: In the songs on Every Single Star we seem to hear real contentment. While there’s still some conflict, especially when it comes to having to be away from your daughters, there is peace, too. Was writing these songs a different experience than writing your first two albums?

Dori Freeman: Definitely. I had recently been married when I started writing a lot of the songs on this record. It was the first time I’d been in a happy, stable relationship, which obviously will have an effect on the themes in the songs you write. I was in a different headspace. For the previous two records, I was in different phases. Whether it was getting over a particularly difficult relationship or looking back on that and thinking what I didn’t want to have. With this one, I was with someone that I really love. So the songwriting was different.

I did a lot of imagining scenarios, which I didn’t do as much with the first two records. Those were based more on very direct experiences. On Every Single Star, the songs about my daughter are very direct and personal, but some of the other ones, like “Of Me and You” — that was a song that I wrote for a friend of mine who’d had a relationship that didn’t work out so well. I’ve had to look for different sources of inspiration this time around. When you’re happy, it definitely makes songwriting harder. [Laughs]

I’m happy you have that problem.

It’s a great problem to have. [Laughs]

Do you have a favorite memory of playing one of these new songs live over the past several months?

Nothing too specific stands out, but one of my favorite songs on the record is “All I Ever Wanted.” One of the things that’s nice about performing that song is almost every time I’ve done it, I’ve had women come up to me afterwards and say how much they enjoyed the song. That was the intention: to write a song fully from a woman’s perspective that other women could relate to. So it’s nice to have girls come up and tell me they liked it.

You’ve said you admire Peggy Lee and the mid-century aesthetic. What is it about the ’50s and ’60s sound that you like?

Peggy Lee is one of my favorite singers of all time. I don’t know what it is. I think for one thing, they still recorded in a more live situation, in a bigger room, so everything sounded a lot fuller on records back then. I also like the style people sang in in that era. My dad played a lot of that music for me growing up. Actually, he just made a record with mandolin, playing a bunch of swing tunes, so he’s really drawn to that music too. I think that it’s that I always listened to it, and I can’t help but have it influence what I do.

You grew up in such a musical family. When you were a kid, did y’all just sit around and play music together?

Yeah, definitely. I was always in choir in school. I didn’t really start to play guitar and sing in front of people by myself until I was about 15 or 16, but even when I was little, I would go jam at parties and festivals with my dad and grandpa, and then sit around and watch people play music.

As I got older, I started to perform with my dad and grandpa on stage. They used to have a little show on Friday nights at the frame shop that my family runs. So that’s one of the first places I really got some good practice performing in front of people. We still do shows together. We still play together as a trio with my husband as well, who plays drums with us now. So yeah, it’s still very much a family thing. 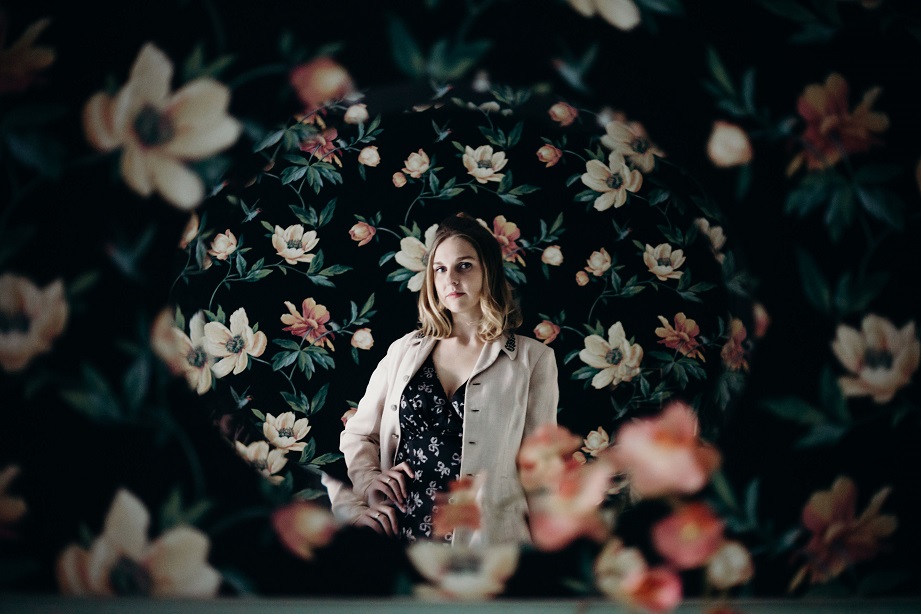 You’ve said that people don’t really talk about motherhood in the music industry. Are there specific experiences you’ve had or witnessed that made the great motherhood omission personally more evident to you?

Yeah, I can think of one in particular, when my daughter was not quite a baby, but not quite 2 years old — so she was still pretty little and motherhood was still a pretty new thing to me. It was also around the same time I was putting out my first record, so it was hard to manage all those things and to figure out how to balance them. I was at a music conference. I won’t say which one. They had this thing where they wanted a bunch of women to get together and talk about problems they faced in the industry as women. So people were raising their hands, going around, and sharing their experiences.

There was a lot we’d all been through, with sexism and dealing with men being inappropriate in a whole variety of ways. That is obviously a huge issue too. But I remember raising my hand and saying, “You know, it’s hard being a mom on tour, especially if there’s no green room, or you don’t have a babysitter to look after your child while you’re playing and then figuring out logistics — you can’t just stay anywhere after a show.”

I just remember crickets in the room. It got overlooked so quickly — everyone moved on. No one really seemed to care. And this was in a group of women. I think most of them, if not all of them, probably didn’t have children. I can understand why it didn’t seem important. But it was not a good feeling to share something personal and important to me and have it seemingly immediately overlooked and dismissed.

I feel like she becomes more a part of what I’m doing, especially when she’s not physically present. If I can perform on stage and sing songs that are about her, I feel like she’s involved in some way. That makes me feel better because sometimes I’m on the road for four or five days at a time, which I know is not that long, but when you have a child — especially a young one — it starts to feel like a long time after a while.

It was really important for me with this record to write a couple of songs about her, and also to make sure that people knew when I was performing them on stage that they were about her. I always introduce the songs as being about my daughter. I want the audience to know she is an important part of my life. I want to feel like my daughter is involved, even when she’s not there. I guess it helps me feel better about missing her.

It helps you, but it also seems like talking about it openly — just saying, “This song is for my daughter” — could go a long way toward normalizing motherhood in music. Many women artists are also mothers.

Absolutely. I feel like in most industries, it’s hard to be a working mother, but being a musician brings a very specific set of challenges. One of the questions I get so often — and it’s one of my least favorite questions — is, “Do you travel with your daughter?” or “How come your daughter’s not with you?”

I just think, “Well, do you bring your daughter to a board meeting? Do you bring your child on your business trips?” I realize that music seems like fun and not a lot of work, but it is a lot of work. It’s a job, as much as I love it. So it doesn’t always make sense to have my child there, and I don’t think it’s fair to be judged for that.

Oh gosh. That’s a tough one. I can give you one example: When I think of a strong, Appalachian woman, I think of my great grandmother. She was from eastern Kentucky and had seven or eight siblings that were younger than she was. She raised them from the time she was 13 on. When she was an adult, she went right into having her own children. She took care of everything. She did the housework. She raised the children. She killed the chickens to cook. It was classic, what you imagine when you think of Appalachia 70 years ago.

If her life had been different — if she’d grown up somewhere else or maybe with more opportunity or more money — she would have pursued music in some way. I know she really loved music. She loved to sing and play guitar. She taught my grandfather how to play guitar.

I feel like in a roundabout way, she has some part in my choice to be a musician. My grandfather has been such a big influence on me musically, and if it wasn’t for her passing on her love of music to him, then it wouldn’t have made its way to me. Even though she couldn’t pursue those things in her own life, she wanted to make sure she passed them on so that someone eventually could.

Yola Chooses to Stand For Herself, But She's Always Looking for Big Ol' Softies

Cover StoryNov 30, 2021
Asleep at the Wheel Turns 50, But Ray Benson Didn't Know If It Would Last

Cover StoryOct 18, 2021
Rodney Crowell's 'Triage' Is All About Love, Mortality, and Making Amends