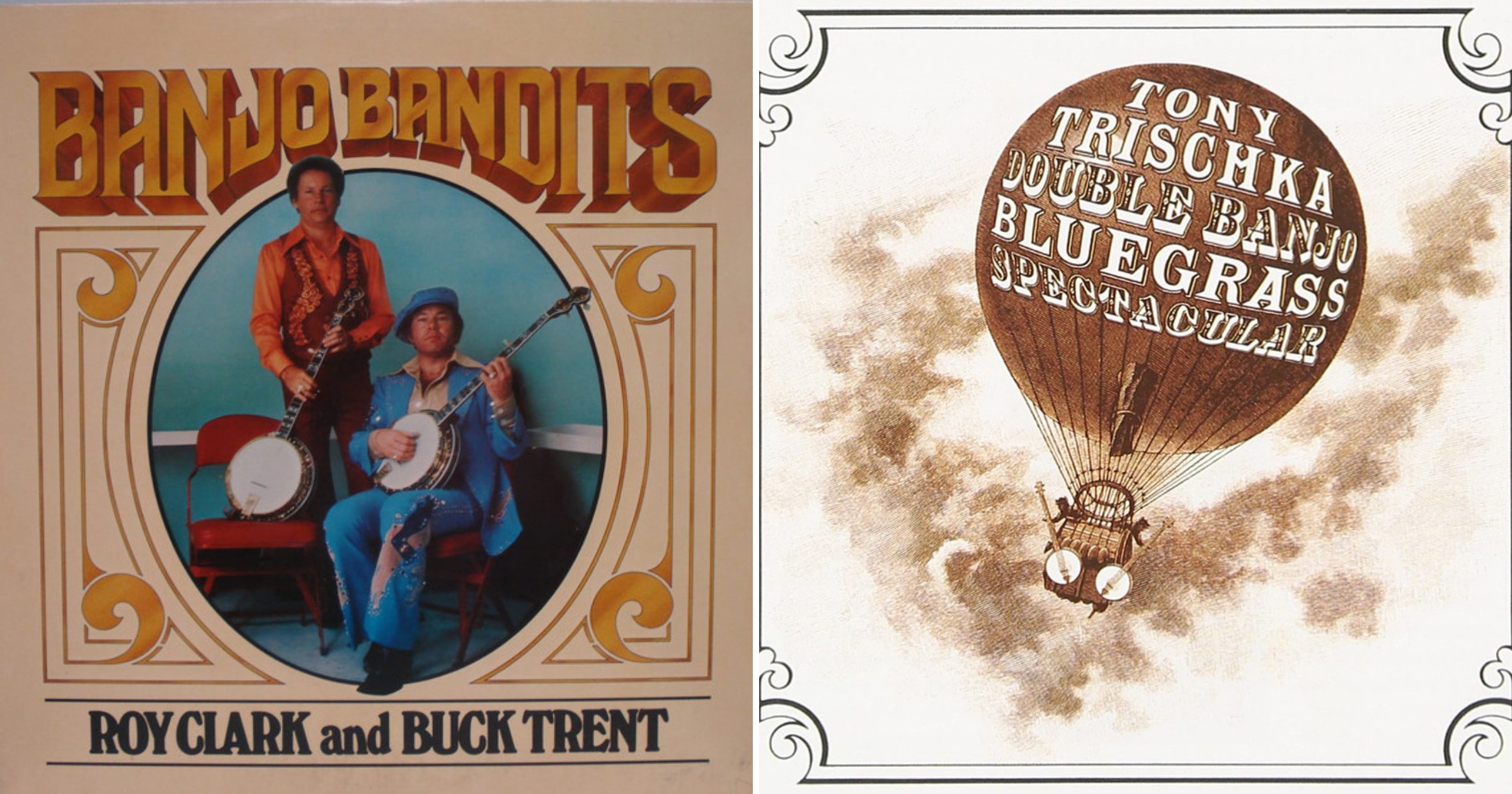 Twin fiddles are the bluegrass instrumental duo that get all the attention, but double banjos are really where it’s at. (Is this writer a banjo player? Why, yes. Is this writer biased? Why, of course!) It makes sense that twin or triple fiddling would end up more popular than double or triple banjos, given that fiddles are sounded by bows, so the melodic contours are more like vocal harmony, often longer phrases and bow strokes languidly and charismatically laced together. Banjos, with their rapid-fire sixteenth notes and syncopated, idiosyncratic rolls, are just more difficult to sync up. Hundreds – if not thousands – of banjo jokes devoted to rhythm and timing will certainly back that claim up.

But double banjo is an art form as old as bluegrass itself – and older, by quite a few dozen decades, if you count early American popular music, banjo orchestras, minstrel and vaudeville songs that all centered banjos before and during the turn of the 19th to 20th century.

In bluegrass, twin five-strings are at their most astounding in jaw-dropping and acrobatic contexts such as High Fidelity’s incredible rendition of the Don Reno classic instrumental, “Follow the Leader.” Famous for his steel guitar and chicken-pickin’ Telecaster licks transferred to banjo, Reno’s harebrained and wonky turns of phrase might seem like the last musical context in which one should attempt perfect synchronization, especially on banjo, but Jeremy Stephens and Kurt Stephenson defy reason, logic, and surely physics with their buttery, seamless, double banjo blend. The track perfectly encapsulates the “WHAT IS THAT!?” quality of five-string, three-finger banjo – raised to the second power.Anyone who grew up tuning in to or has ever binge-watched reruns of Hee Haw knows the beauty of a good double, triple, quadruple, quintuple banjo number, a common feature of the homespun country, comedy, and pickin’ variety show. Roy Clark, the Hee Haw host who could tear through almost any instrument in any style, released an entire album of double banjo music with regular Hee Haw guest Buck Trent in 1978 called Banjo Bandits. “Down Yonder” kicks with all-too-rare (and certainly delicious) bluegrass piano, a delightful intro to a bluegrass, old-time, and American songbook standard that almost sounds like a carnival merry-go-round thanks to the effect of the banjos “in stereo.” Banjo Bandits is something like a bluegrass and country double banjo primer, every track a stunning example of the form.Like twin fiddling, double banjo lends itself so intuitively to the collaborative, community quality of bluegrass music. Through many a duo album and “featured artist” slot pickers have been using double banjo tunes to bring in their favorites, their mentors, their heroes, and their peers to swap licks, rising and falling, rolling and tumbling in breakneck unison. Alison Brown’s first Grammy Award was won for “Leaving Cottondale,” her double banjo instrumental with Béla Fleck from her also-nominated 2000 record, Fair Weather. In 2007, modern banjo hero Tony Trischka released a 14-track album of all twin banjo tunes entitled Double Banjo Bluegrass Spectacular. Its roster included Earl Scruggs, Brown, Fleck, Noam Pikelny, Steve Martin, and more. On “Doggy Salt,” a silly, winking instrumental that reconfigures the classic chord progression of “Salty Dog,” Scott Vestal joins Trischka, leaning into the humorous, comedic quality of these sorts of duets — a quality we see in Banjo Bandits and “Follow the Leader,” too.Do not be mistaken, though, putting together a banjo duet isn’t just a comedic or intra-bluegrass activity! Cross-genre double banjo forays are certainly just as delightful, if not rarer and even more difficult to lock into rhythmic synchronization. Those that can mesh together three-finger’s rolling right hand with clawhammer and frailing’s loping, looser right hand are true virtuosos, defying not one but two genre’s expectations that banjos are intrinsically arhythmic and constantly rushing. Old-time players like Allison de Groot, Cathy Fink, Mark Johnson, Victor Furtado, and others all make it look and sound easy, matching their bluegrass compatriots’ rhythms and syncopations with ease and not just blending in, but counterpointing tastefully as well. One such recording, “Cluck Old Hen” from Pikelny’s Beat the Devil and Carry a Rail project, features Steve Martin, once again, on clawhammer. A less traditional approach, the two play with textures and senses, not striving for perfect unison, but rather exploring what an old-time-and-bluegrass dialogue can look and sound like, expanding our ideas of what twin banjo can be.No matter the context, genre, roster of pickers, or style of playing, this fact remains true: more banjos equals more fun. (To this writer, at least.)