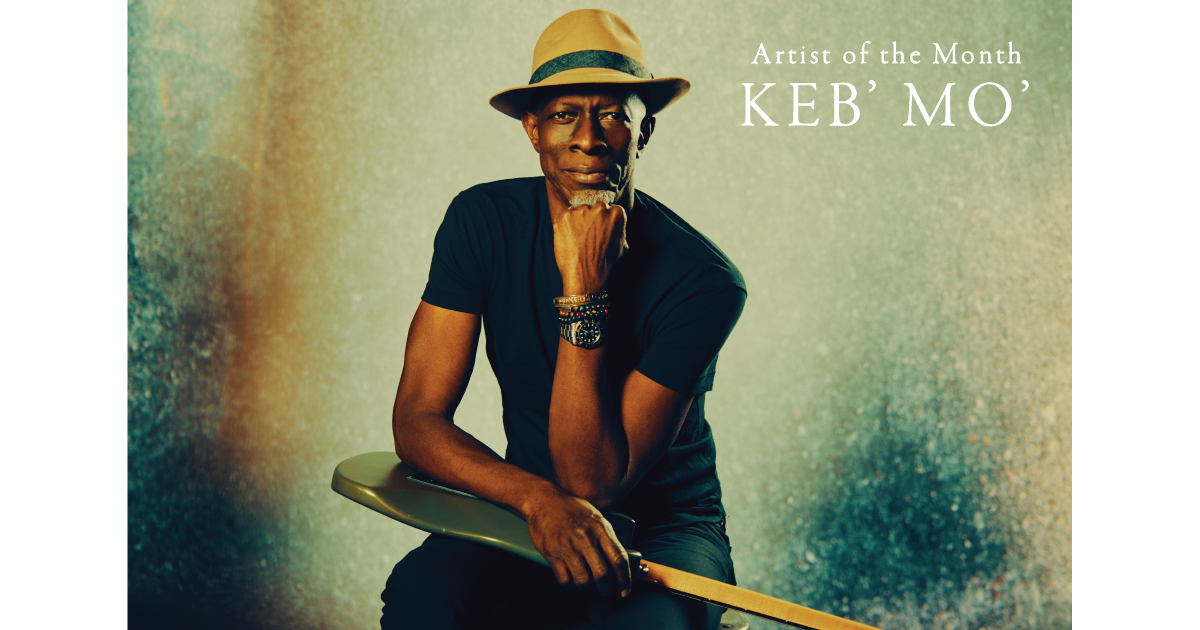 Keb’ Mo’ enjoyed a career milestone as he received a Lifetime Achievement in Performance Award from the Americana Music Association in 2021. Presented at the Ryman Auditorium in Nashville, the award joins a list of distinctions that include five Grammys and 14 Blues Foundation Awards. But in typically understated fashion, Mo’ (a.k.a. Kevin Moore) downplayed the latest honor during his Artist of the Month interview with the Bluegrass Situation.

“Well, for me I guess it represents the fact I’m getting old,” he said with a laugh. “But sure, you are honored whenever you get that kind of recognition from your peers. But I’ve still got a lot that I want to do and I’m still looking ahead.” A huge indication of that is his outstanding new LP, Good to Be. It is both a tribute to his background growing up in Compton, California, and a celebration of some 11 years in his current hometown, Nashville.

Good to Be superbly showcases the wide mix of influences that Keb’ Mo’ has seamlessly explored in a glittering career that’s covered nearly five decades. He’s consistently demonstrated his excellence in multiple genres, while collaborating with artists that include Bonnie Raitt, Lyle Lovett, Willie Nelson and the Chicks. As a songwriter he’s had numbers covered by B.B. King and Zac Brown Band, among others.

A personal favorite on the new project is “Good Strong Woman,” which he co-wrote with Jason Nix and Jason Gantt. Darius Rucker joins Keb’ Mo’ for a splendid vocal effort that’s already yielded both a single and video. “Man, he came in and just sang the hell out of that song,” Mo’ observed. “I didn’t have to say much. He just took it and really put his heart and soul in it and we got something really special out of it.”

Looking back at Keb’ Mo’s distinctive recorded legacy, a couple of his creative triumphs are especially memorable. While he had one LP issued as Kevin Moore in 1980, he would truly begin making his mark as Keb’ Mo’ in 1994. Two years later, Just Like You would bring his first Grammy award (for Best Contemporary Blues Album) and become the first of seven LPs that would reach No. 1 on the Billboard blues chart.

That tradition continues with Good to Be, which in its first week earned his eighth Billboard blues chart-topper. He’s also displayed his country vocal and production chops on the 2001 Grammy-winning Timeless: Hank Williams Tribute album, soaring on “I’m So Lonesome I Could Cry.” His 2017 duo release with Taj Mahal was a brilliant summit meeting of two greats whose careers are remarkably similar in terms of versatility and genre-blending.

Two of Music City’s heavyweights contributed to the sessions for Good to Be. Country great Vince Gill produced three tracks and ace drummer/producer Tom Hambridge was on board for several others. Still, Mo’s vision is what clearly comes through each tune. “When I go into the studio, I definitely have my own plans and ideas at the forefront,” he said. “No question that Vince and Tom had suggestions and ideas, and sure, I’m open to input, but ultimately it’s got to reflect what I’m most comfortable with and about.”

The album’s title track, produced by Gill, is a poignant and powerful number, with Mo’ singing passionately about his youth and the impact Compton will always have on his life and work. The supporting vocals from Gordon Mote, Paul Franklin, and Wendy Moten add emotional punch and dimension. Mo’ wrote it during a return visit to Compton last year, inside the childhood home he purchased and renovated in 2018. It’s also where he composed “The Medicine Man,” recorded on the album with Old Crow Medicine Show.

“I’d been talking with Ketch (Secor) about doing something with Old Crow for a long time,” he recalled. “But this one just proved to be the right tune. I sent it to Ketch and we talked a bit, but there weren’t a lot of things that we had to change. It fit and really worked out very well.”

Mo’ also turns in a stirring rendition of the Bill Withers’ original “Lean on Me.” “At this point in my career I don’t do a lot of covers, but Bill was such a great friend and songwriter I wanted to pay him tribute,” he said. That track also includes a memorable vocal contribution from Ernest “Rip” Patton, the longtime Civil Rights leader and a Nashville Freedom Rider who died in August 2021. Patton was a neighbor in Compton as Mo’ was growing up.

“Man, it was such a shock to me when I came to Nashville and found out that this wonderful man who had been a neighbor had contributed so much in fighting for justice and equality,” Mo’ added. “He was such a great man, but for a long time to me he was just Rip. When I found out all the other things it was incredible.”

Keb’ Mo’s extensive laundry list of professional highlights isn’t limited to the bandstand. He’s also enjoyed success as an actor, playing Robert Johnson in the 1998 documentary Can’t You Hear the Wind Howl, and portraying Howlin’ Wolf on CMT’s Sun Records. Mo’s also been involved for many years in social justice activities, being a celebrity mentor with the Kennedy Center’s Turnaround Arts program, adopting the Johnson School for Excellence in Chicago, and being an ambassador for the Playing for Change Foundation.

After more than a decade as a Nashville resident, he says he’s seeing some things that have changed for the better in regard to diversity and inclusion. He’s particularly happy about the new National Museum of African American Music (NMAAM) which opened last year on Fifth Avenue, right across from the legendary Ryman Auditorium.

“When you walk in that place and you look around, not only do you see and feel the history of a people and of music in this nation, you also get a sense of pride,” Mo’ said. “Going in there and seeing those exhibits, and just knowing that this building is in Nashville is an amazing thing. I’ve been here (in Nashville) for a while, and everywhere I go I see signs of positive change. When I’m going down on Broadway and seeing more diversity in the crowds, even in the music you hear in the clubs, well, it’s a good feeling.”