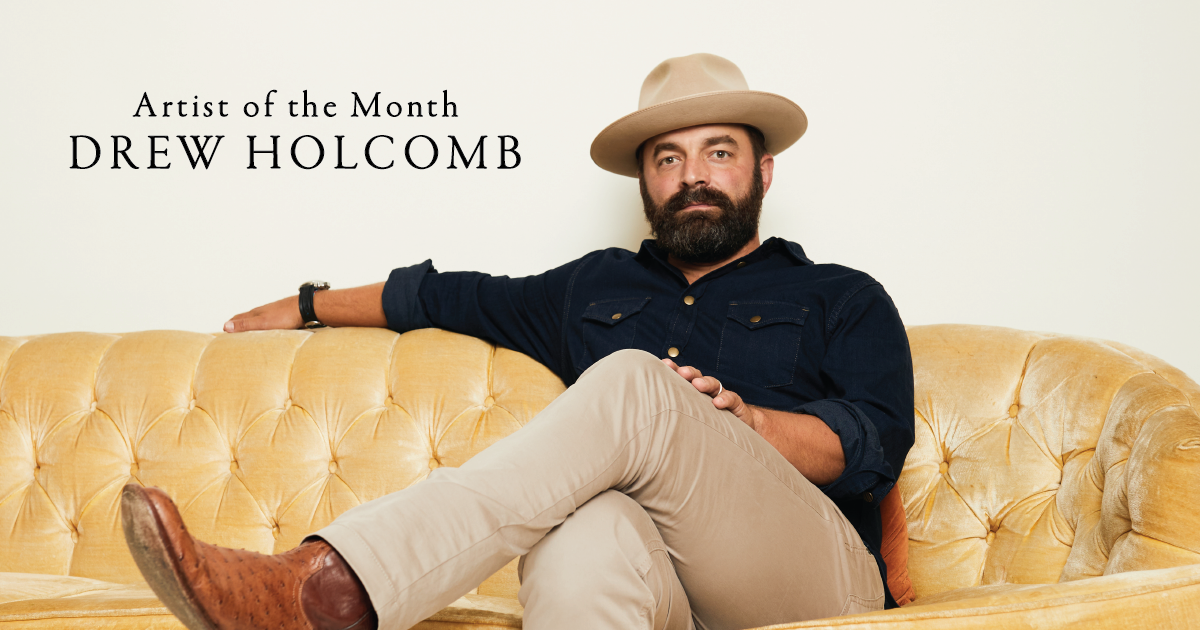 Drew Holcomb writes and sings often about the comforts of home and family life, but don’t assume he’s setting his family and himself as role models.

The leader of roots-rockers Drew Holcomb and the Neighbors, Drew (who is the BGS Artist of the Month for January along with wife Ellie Holcomb) is quick to point out that the couple is “not trying to portray any sort of ideal.”

“We just write about our life,” says the singer-songwriter, whose most recent projects are a tour and compilation album with Ellie. “That’s sort of the season that we’re in. It would be disingenuous for me to try to write anything different than what I see and experience, the lens that I have.” Drew says he does have some narrative songs in his catalogue that are less personal, “but it’s not tended to be where I’m drawn to as a songwriter.”

BGS: Your band, Ellie’s solo work, and the duo each have a separate, unique sound. Do you purposely work to give each a different style?

Drew Holcomb: Part of that’s personality. When I’m recording with the Neighbors, it’s always the same players, who I’ve been playing together with for years. And then Ellie has worked with different producers and different musicians than me, and she has her own stylistic creative impulses and decisions. So those two roles are clearly differentiated, and then we get together. We decided to let each song sort of dictate itself. There’s some good variety in there, but it lends itself toward more of a singer-songwriter vibe with a little more atmospheric, sonic landscape kind of creativity.

After Ellie left the band (Drew Holcomb and the Neighbors), she eventually started a successful career in Christian music. Where did the idea of also working as a duet come from?

She was in the band and took seven years off from that, and is still not in the band, but we do this (You and Me) tour together every year. We thought we should write some new music. We had not written together in almost a decade. We just put them up on Spotify and stuff like that, and they actually performed really well. The music sort of became its own sort of separate entity from my work with the Neighbors and her solo work.

Your take on Sting’s “Fields of Gold” pares back the production for a comparatively sparse interpretation. You and Ellie also do that on your Kitchen Covers series. Why that approach?

I primarily see myself as a songwriter, maybe secondarily as a singer. And thirdly, as a performer, entertainer. The genius of a song can get lost in some of the ornate production and people just think about it as a pop song, right? They don’t hear the great songwriting at the bare bones of it. I’m not a theatrical, big singer. So I kind of quiet things down, take the dynamic down on an “Islands In the Stream.” It’s just an interesting approach.

You’ve mentioned Van Morrison and Bob Seger as influences in the past. Who else are your musical heroes?

I love Tom Petty for a lot of reasons. I love how he played with the same guys for the majority of his career, working with different producers, made different styles of records but always with the same sort of North Star. Springsteen. There’s so many. Carole King, Emmylou Harris, Willie Nelson. There’s like 100 persons.

Americana is increasingly the category of singer-songwriters in popular music, where in the past comparable artists like Jim Croce and James Taylor had big hits on the mainstream pop charts. Is that frustrating for you?

Yes, certainly it is, to some degree. But if I was starting out in 1971, I don’t think I was good enough to have gotten a label deal, the only way to get records released in that era. The era I was born in gave me that long runway to hone my craft. Yes, there’s not as much opportunity commercially for what artists like myself do. But if it ever is frustrating, it’s something I move on from pretty quickly, just because you can’t change when you were born. I do think it’s actually a really wonderful time to put out music because there’s a lot of space for a lot of artists. While there may be less of us on a large commercially successful level, there’s probably more of us doing it in general, at the “pay your bills and keep moving forward” level. There’s so many good artists making great records that it’s a different type of a golden age.

Can you be immodest for a moment and tell me which of your songs might have staying power and be covered years from now?

I don’t know. I’ll let posterity decide if that happens. We get videos all the time where people are out and they’re hearing some person in a restaurant playing our songs. It’s really cool to see other artists and songwriters giving it a go. I definitely have been surprised by “What Would I Do Without You,” from the Good Light album. It seems to have that sort of staying power. I hear from people that their grandparents love the song, and then their kids love the song. If I could get kids who grew up on my music that came out before they were born and they still like it, that would be a good barometer of the staying power of the songs themselves. I’m starting to see that a little bit, and I hope that continues.

Are you still in the whiskey business?

I am. Just a very small partner on a thing called Sweetens Cove Tennessee Bourbon. It’s been a fun endeavor for sure. My manager and I both are collectors of bourbons and various whiskeys. When I was living in Scotland in college, I started drinking scotch. I was a history major, so I always fall in love with the backstory of whatever thing I’m consuming. Whiskey is great for that because every brand’s got a good mythology story, a good origin story or creation story. It’s a fun thing to be a part of.

You’ve done some scattered dates since the coronavirus hit, but the February–March You and Me tour with Ellie is your first full-fledged tour since then. How do you feel about it?

It’s great. You don’t realize how much you love something until it’s taken away from you. We’re definitely going to play some new songs on the tour. We’ve been writing. I like to test new stuff out, tease it out a little bit.

Did you write a lot of songs while you couldn’t do many shows?

Maybe 40 and growing. I’m not proud of all of them. Half of them are worth taking into the studio to see what happens.

Usually, I cannibalize them. I take the stuff I like out of them and start something new.

Do you have any particular ambitions for your music going forward? Is there somewhere you want to go that’s different than what you’re doing now?

I’m writing more than I’ve written in a long time. COVID’s been good for my writing in the last eight months at least. I’d like to probably increase the pace at which I release music, but maybe decrease the pace at which I tour. I’d love to get to that point where instead of every tour having to be connected to a new record, you just tour on and off all the time and put out music whenever it’s ready.

You’ve done collaborations with The Lone Bellow, Lori McKenna and Natalie Hemby. Do you see more of this cross-pollination in the future?

I did this thing with Johnnyswim. We did a collaborative EP (Goodbye Road). I have aspirations of doing more and more of that with other artists. I’ve been doing lots of co-writing. The older I get, the more freedom I feel to collaborate and hold my own creative rudder less tightly and see what happens. I think there’s some of that on the horizon as well. That’s also what’s been fun about working with Ellie, to do things differently, try to stretch different muscles creatively and challenge yourself in different ways and share the spotlight. That’s been a big thing for me.