Drew Holcomb & the Neighbors Gather Friends and Family, Too 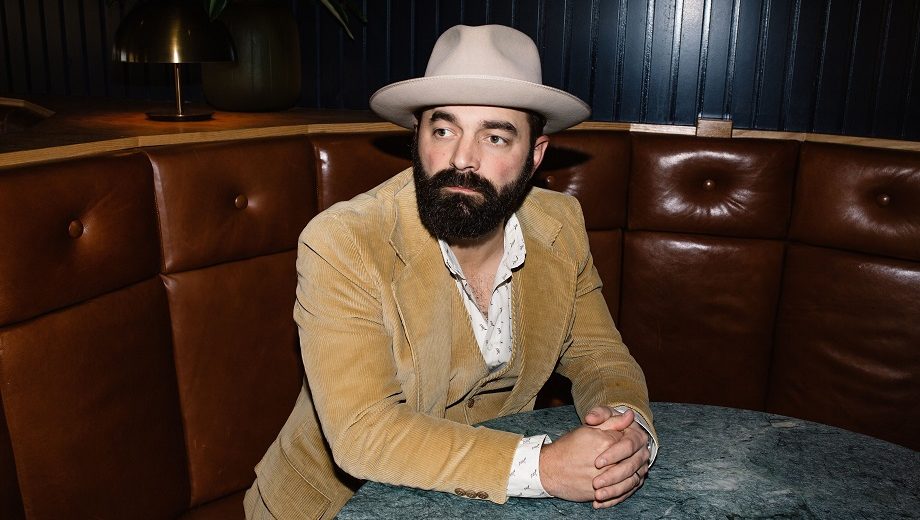 Drew Holcomb could lead quite a neighborhood association. Along with his band, The Neighbors, he collaborated with such all-star songwriters as Natalie Hemby, Sean McConnell, Lori McKenna, and The Lone Bellow’s Zach Wiliams for the band’s newest release, Dragons. Although it wrestles with some heavier themes — particularly dealing with grief and accepting that time moves faster as you get older — the record as a whole is an exhilarating listening experience that bridges the gap between the introspection of their prior albums and the dynamic of their live show.

As a friendly neighbor would do, Holcomb invited BGS for a cup of coffee near his home in East Nashville.

BGS: You did a lot of co-writing on this record and these songs have some real depth to them. Did you find yourself going into deep conversations as you were writing the songs?

DH: Yeah. Everybody I wrote with were friends. I still don’t love co-writing, but I like it with the right people. I already had a pretty clear vision of how I wanted to get intensely personal on this record. So when I wrote with Lori, for instance, we weren’t just writing songs for whoever, we were specifically writing for me and my record. She was able to draw things out of me while still letting me have the primary vision of what I wanted.

And yeah, there were a lot of great conversations. The song “Maybe” with Natalie was just… We were talking about how you have all these dreams you want to pursue, places you want to see, experiences you want to have — and as you get older, sometimes you think… you know, this is kind of exhausting. What I really want to do is, I just want to be with people I love, in the place that I love, and enjoy that.

That was pretty neat how you brought your granddad into the song “Dragons.” Did he really appear to you in a dream?

It’s sort of a mixture of dreams. I lost my brother when I was 17. I lost my grandfather when I was 23. Those were probably the two closest people to me. And I lost a friend to an overdose at 20. But everybody I’ve ever lost who was really close to me, I had very vivid dreams of them — and wake up super sad. They’re so real. You kind of relive the grief all over again, when you wake up.

But some of my dreams of my grandfather have been really sort of playful and fun. You know, because he lived a full life. There’s less sadness around that. I had those lines in the chorus of “Dragons” before we started the song, and was just looking for a way to deliver them, and that sort of attitude about life I got from my grandfather – to take chances, you only live once.

What’s that experience like when you write about your family — like your brother, your son, or your granddad — and then you play the song for your family?

Well, like “Dragons” — a lot of my siblings have their own experiences and their own histories with my granddad. So same question: “Is this a real dream?” And “Family” was one that everybody immediately fell in love with. I come from a huge family, I mean 14 to 28 grandkids on my mother’s side. It’s like beautiful chaos when we’re together. For the most part everybody gets along. There’s a lot of children, grandchildren, a lot of chaos. So that song, I think, really represents sort of my experience with family.

I love the line, “Going on vacation / On the credit card.” My dad loved to travel. And he would always say, “You’re never going to inherit any money, but I’ve made all my deposits in the memory bank.” Part of it was because of my brother in the wheelchair. Dad knew that maybe his time was shorter than the rest of us, so he wanted to take every opportunity. We had this big conversion van and every summer he’d take off two weeks and we would just go. I saw 44 states by the time I graduated high school.

Wow. And you were based in Chattanooga at the time?

Yeah. So we went off to California. Went to the Pacific Northwest. Went to Colorado and Texas, New Mexico, all the way up… We did a New England trip. We did all up in Canada. All of it driving.

Was there a music component to this, too?

Oh sure. Yeah, we’d listen to a lot of oldies radio. Back when tapes were still a thing, you could buy $5 tapes at the truck stop, and so he would let us all pick out a tape at the start of the trip. My favorite one I ever got was this Joe Cocker record. It had this Jimmy Webb song called “The Moon’s a Harsh Mistress.” And we had our Walkmans too. We’d play our tape and then we’d kind of take off on our own thing. In some ways, those road trips are where I fell in love with music. Dad loved Dylan, so we listened to a lot of the sort of pop songwriter guys.

Were you playing guitar by this point too?

Started to. Got my first guitar when I was 12. Really started to learn how to play at 14. By high school, I was proficient enough to play through most of the songs I liked.

Did you just teach yourself?

I had a friend who was really one of those “play everything” guys — Jonathan. He played piano, guitar, drums. He lived down the street. He kind of taught me. I took lessons but the lessons never really caught, because it was more like theory and stuff. I was like, “No, I just want to play some Bob Seger.”

My wife’s wedding present to me was a record player. And then my first job was in music, as a sort of studio runner for a guy named Paul Ebersold, a producer. He and Ellie kind of conspired. She went and got me the record player. He went and bought me a bunch of classics — Born to Run, Blood on the Tracks, Van Morrison, all the stuff he knew I loved. Then on our honeymoon, we went out to San Francisco and went to Amoeba Records there in Haight-Ashbury. We spent like $500 on vinyl, shipped it all home, and that was sort of the start for us.

You launched the Magnolia Record Club now and you curate the Moon River Music Festival. That’s all interesting to me because it’s about music discovery. Why is that important to you, to help people discover music?

I think in some ways it’s like a pay-it-back, or paying forward. That’s how people found me, was by someone, some curator, taking a chance and putting me in front of listeners. I had never had a radio hit. Never really had a big national tour. Done some tours with friends, but I never had the machine, but I still made it because a lot of festival buyers and legacy acts and younger bands have shared their stages with me, and shared their audiences with me.

On the press side too — we’ve never blown up in the press, but we’ve had lots of people give us a lot of healthy attention. We played Bonnaroo in 2013 and I still have people all the time come up to me and say, “I first heard you at Bonnaroo.” That happens at all the different festivals we play. And so, I wanted to create that same sort of opportunity, but also I wanted to do it as a fan. I wanted to put these bills together.

We talked about this a little bit, about how you found your audience. But it seems to me that part of that is that you showed up for everything. You really took it seriously from the start. Where do you get that work ethic from?

I think part of it is that my dad always instilled this “work hard at all costs” in me. It was like, I’m going to get beat on talent — and that was definitely true when I was younger. I may get beat on opportunity, and with who you know. Nobody’s going to out-work me.