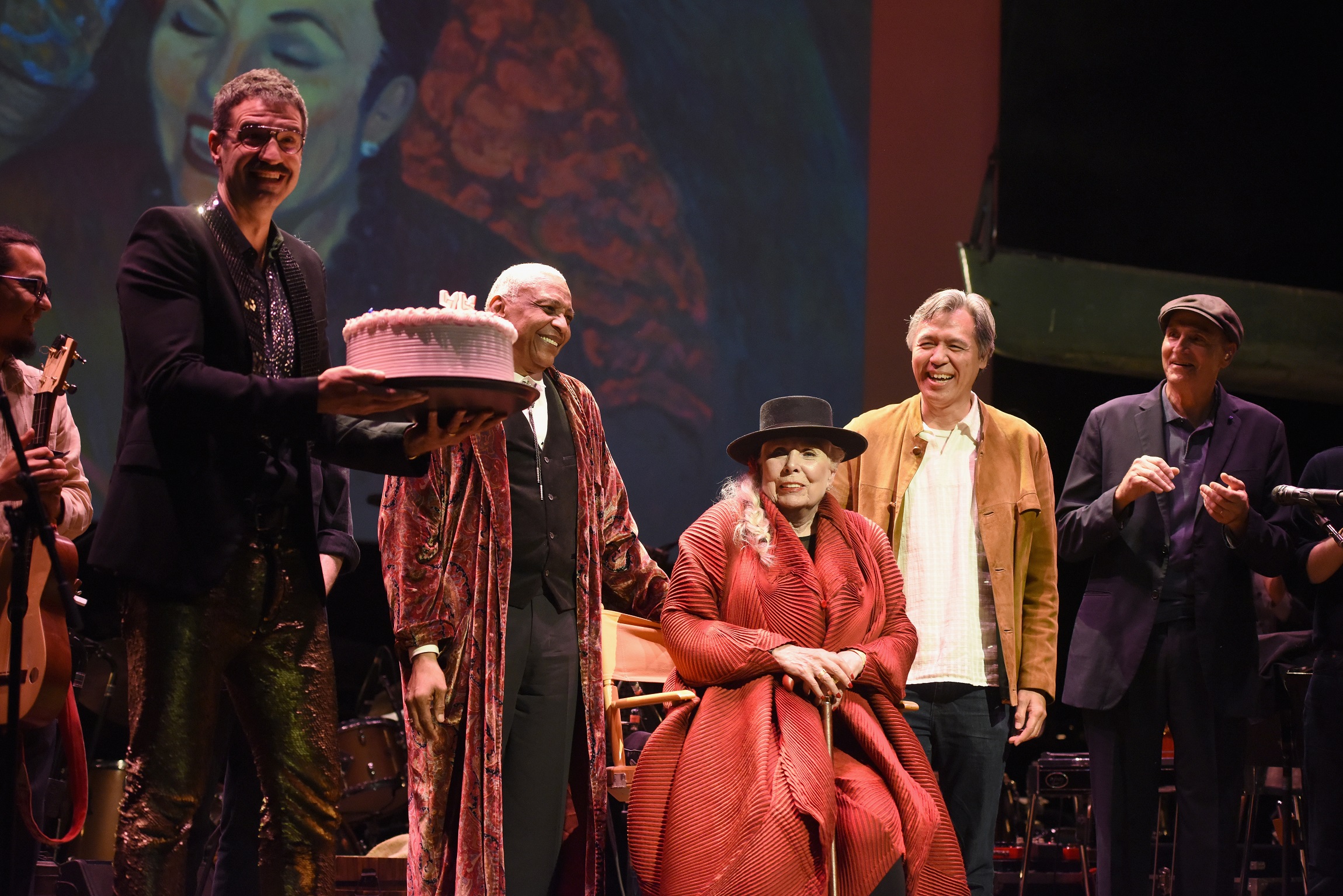 Joni Mitchell’s 75th birthday provides a great excuse (as if one is needed) for an examination of her catalog. A recent listen to her albums, in order, from the 1968 debut Song to a Seagull through 1979’s Mingus, was entrancing and revelatory.

Through these albums, motifs emerge: mechanical and technology metaphors (“Electricity,” “You Turn Me On, I’m a Radio,” “Just Like This Train”), the allure/elusiveness of a free spirit (“Carey,” “Coyote”), the road as freedom and/or the illusion of freedom (“Refuge of the Road”), seemingly countless cafe and bar tableaus, each one vividly fresh (“Barangrill,” “The Last Time I Saw Richard,” “The Jungle Line”). And musically there’s the vertiginous vocal constructions, the ascending modal chordal guitar climbs, the preternatural classicalism of her piano and, of course, the mystique-filled harmonics of her idiosyncratic guitar tunings.

But the real motif throughout is that of the restless spirit: Just as you think you’ve got her pinned down, she’s going to bolt. This is, after all, the woman who, in her most radio-friendly pop song, “Help Me,” followed the domesticated joy of “we love our loving” with the wildcat escape clause, “not like we love our freedom.”

It’s also a catalog full of epiphanies, even for those intimately familiar with it, if approached with open ears. With each album there seemed to be one song that had gotten by in the past without making a full impression, but now grabbed the ears and mind in full, startling engagement, often standing out as different from anything else on its album, in some cases different from anything else Mitchell had offered. It’s Joni as Rorschach test, revealing as much of the listener by the response as it reveals of Mitchell the artist.

Try it yourself. See what grabs you. With commentary below the playlist, here are the songs that did that now for this writer.

Never mind the “next Dylan” tag applied to every singer-songwriter of that time. The opening song of Mitchell’s debut album, produced by David Crosby, might make one wonder if she could have been the next Stephen Sondheim. The sophistication of the song is considerable, both the music and the words, a yearning soliloquy that could have been more at home on a Broadway stage than in a Village coffee house.

The astonishing overdubbed harmonies. The indelibly idiosyncratic guitar tunings. The spritely dulcimer. The vivid close-up imagery and emotions. The sonata-like piano. None of those Mitchell signatures are on this song. Rather, this is a little coda for Joni Anderson, Canadian folkie. It’s just a solo, unaccompanied voice in an anti-war plaint, a song that she wrote but could easily pass for an English lament from centuries past. No wonder that among the several cover versions of it, one was by English singer June Tabor. As atypical a Mitchell song as it is, it’s resonated through the years with various versions, not least in its use as the title tune for a 2007 ballet conceived by Mitchell with Jean Grand-Maître of the Alberta Ballet Company. “This is a song I wrote for America, as a Canadian living in this country,” she said, introducing it on a 1969 Dick Cavett Show performance.

“She went to Florida and left you with your father’s gun alone…” The tale is startling in its starkness, the melody deceptive in its plainness (relatively), but it’s the brief bits of “upstairs choir” harmonies illustrative in the middle and elegiac at the end that bring the light to these shadows.

It’s a full minute into this song before Mitchell sings, as if she needed the time to consider whether to tell the story of dreams held and lost or just to keep it to herself while sitting and playing the piano. “All romantics meet the same fate someday” — as Joni a line as there is.

The middle instrumental section comes almost out of nowhere, Mitchell’s piano turning angular and fragile before being joined by waves of voices, flutes and strings, and then goes away just as suddenly, as if a tease for a concerto she was holding inside her. The title parenthetically evokes Beethoven, but the music suggests some of the 20th century’s great composers.

Anticipation as palpable as it comes, first in the pure joy of it, but then full of anxious worry. You can picture Mitchell peeking out the window, checking her watch, trying to check her rising fears, waiting…. waiting… waiting….

On paper, musically at least, “Song for Sharon” would seem to be the plainest of the songs among the electric-guitar texture explorations of Hejira (not a piano or acoustic guitar to be found here), nearly nine minutes long. But patience pays off as line after line startles, shocks, an account of wanderlust, of suicide, of searching, of revealing resignation as she writes to a childhood friend: “Well, there’s a wide wide world of noble causes / And lovely landscapes to discover / But all I really want right now / Is, find another lover.” And keeping her company, a doo-wop chorus of Saskatchewan ghosts, though it’s unclear whether she’s carrying them with her or running from them.

“The Tenth World” and perhaps “Dreamland,” as the two are something of a piece (from Don Juan’s Reckless Daughter, 1977)

The shifting landscapes of the 16-minute “Paprika Plain” is this album’s masterpiece, perhaps, but “The Tenth World,” six minutes of dense and intense Afro-Latin percussion laced with barely perceptible chants and chatter, may be the most unbridled expression in all of Mitchell’s work, the sound of total, joyful abandon. And it leads right into “Dreamland,” also just percussion and voice (in a very different way than “The Jungle Line”), which carries that joy from fantasy to reality. Bonus on the latter: Chaka Khan’s soul-moan counterpoints.

A low detuned guitar string buzzes and roar while wolves — real wolves — howl as Mitchell casts a dark, wary, jaundiced eye on a two-legged lupine predatorily prowling the Hollywood Hills. It’s an odd side-trip on this album, nothing really directly to do with the honoree. Maybe that says something about the wolf that lives in Joni Mitchell.