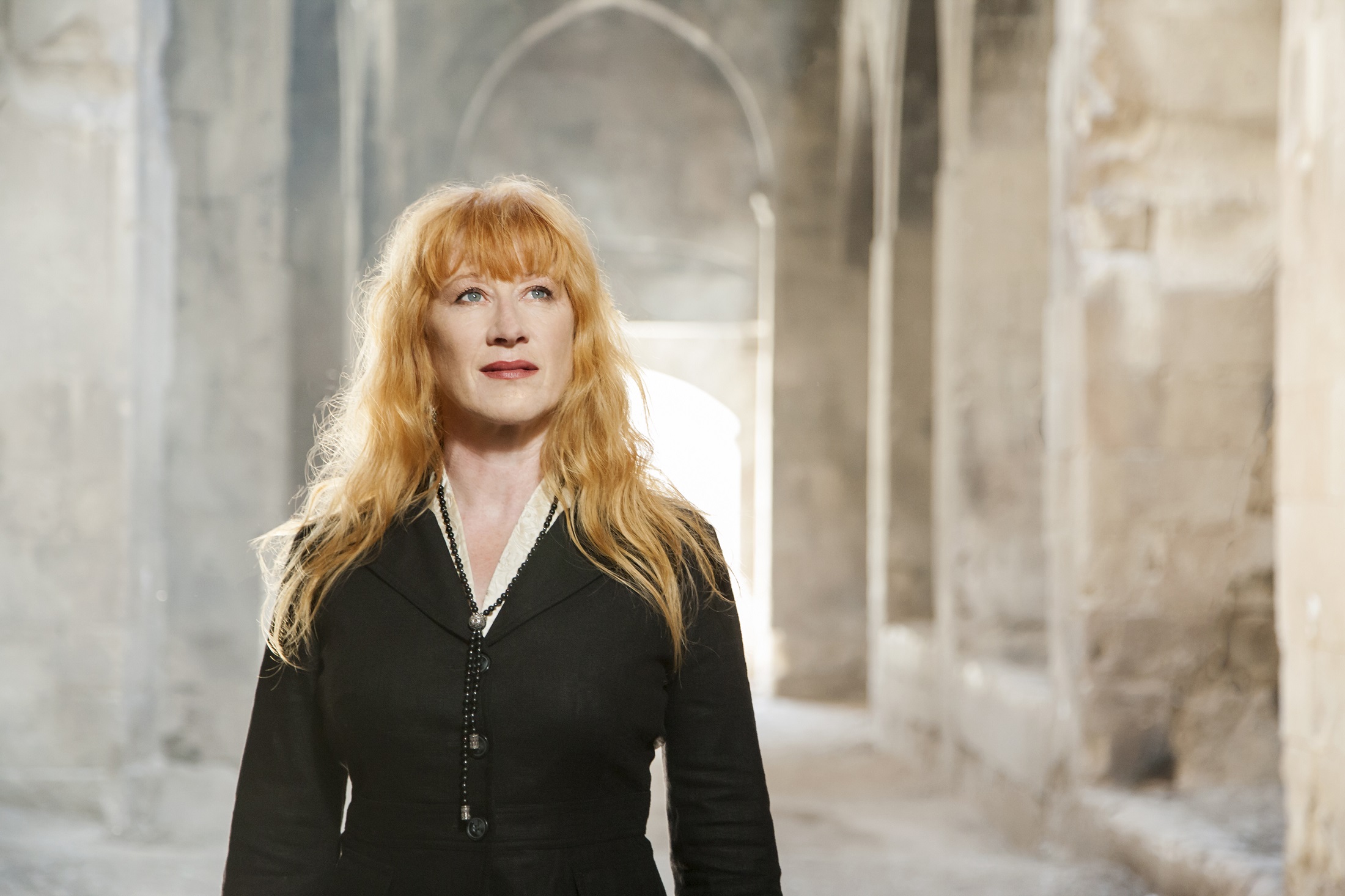 Loreena McKennitt is both a Romantic and a pragmatist. During a thirty-year career that began with her busking on the Toronto subway and led to composing a new work for the Royal Canadian Air Force, the Canadian singer-songwriter-producer-historian has dug deep into European musical traditions (the Celts in particular) and has found vivid inspiration in the Romantic poets (Keats and Yeats in particular). Her music strives for a dreamy kind of beauty, often described as ethereal but usually rooted deep in the soil of her native Canada and her ancestral Ireland.

And yet, she admits the impetus behind, Lost Souls, her first album of new material in more than a decade, was largely practical: “The fact that there hadn’t been anything new was becoming a bit conspicuous. We had a number of people writing to ask if I was going to come out with a soothing original ever again.” In addition to writing a handful of new songs, McKennitt pored through her own archives, finding old songs—some written in the late 1980s—that spoke to her. “There were songs I had written along the way that didn’t fit my previous recordings, so I started looking at those songs again. I thought, yes, they’re a bit like lost souls.”

The songs may have disparate origins, but Lost Souls is neither a rarities compilation nor a retrospective. Rather, the album holds together as a larger statement, as one song after another expounds on the implications of its title: loss and yearning, travel and transience both geographic and temporal, even the end of humanity on Earth.

Can you tell me about putting this album together? It doesn’t sound like a bunch of songs you had lying around.

If I look at it objectively, I suppose it makes sense. There are various composers of music who have stayed within a certain realm of their sensibilities. Even if they wrote something years ago, the material itself has the connection to the person who wrote it. Also, we recorded these songs all freshly within the last year, so I was able to bring a lot of the aesthetic and approach of recent recordings to it. And I am blessed with an incredible bank of talented musicians.

What was it like to revisit these songs and engage with them again?

It was interesting going back to previous mindsets. “Ages Past Ages Hence,” I wrote it somewhere around ’89 or ’90. I remember performing it at the Toronto Winter Garden in 1990. It was at a time when I was listening to Kate Bush. I really liked the angular approach she takes on some of her music, so I thought it might be interesting to head in that direction. “The Breaking of the Sword,” I wrote it about a year and a half ago. I was commissioned to write that piece, but I wrote the melody in 2006 or maybe even earlier than that and only put the words to it last year. Those lyrics mean a lot to me and that’s the piece I would say probably connects most to where I am today.

It’s interesting that “Ages Past Ages Hence” is so old. It seems to fulfill the theme of the song to have it waiting around for so long.

When I think of that song, I remember I was living in a rented farmhouse and my writing desk looked out a window into a wooded area. A lot of the trees were quite mature, probably 100 or 150 years old, and I remember many times reflecting on what they had seen during their lives. They were witnesses to whoever lived there and all the human folly in a more general sense over the years. That sentiment connects to my own Celtic history. The Celts had a major connection with trees. They felt that trees perhaps embodied some of their ancestors, as many indigenous people have, and they felt the trees played a special role on this planet. So the fact that I had this Celtic heritage and this connection with trees is probably not surprising. Also, I wanted to be a veterinarian at one point in my life, and if I hadn’t gone into music, I probably would have gone into wildlife conservation or forestry.

These things are all tied together, and then everything comes together in the last song, “Lost Souls,” which was based on a book I read a few years ago by an anthropologist called Ronald Wright. He studied civilizations as one might study the black boxes of aircraft that have gone down, and he observed that over the millennia we as a species have a tendency to get us into progress traps. We might very well be caught in one now. He observed that around the time of the industrial revolution, we went from being concerned about our moral progress to being more interested in our technical progress. He cites the denuding of the landscape on this planet as one of the big progress detriments, because it’s so integral to oxygen and water retention. All of these things go swimming through my mind as I’m stitching together the recording, which becomes a bit like a quilt.

These are songs about travel, which don’t just mention the places but incorporate the music of those places as well.

I love listening to these various instruments played in their idioms, so part of it is pretty selfish. Secondly, there is the thrill of getting to share that excitement with other people. Bringing in the flamenco player from Málaga gives the music an authenticity that it perhaps wouldn’t have if someone else played that part. So it’s a combination of respect to those cultures and the gratification it gives me to share that with other people as one might share a new recipe with friends.

But it is complex territory. It’s been fresh on my mind because I was listening to an interesting BBC program about the upsides and downsides of selecting music from other cultures and putting it into your own. Some people say, “Hey, that’s our culture. You shouldn’t be taking that.” Other people say, “Wow, I’m going to visit that place and that culture and I’m going to listen to more groups that play flamenco.” I like to think that music is a timeless and international language, and there’s nothing I want to do to damage the distinctiveness of that voice or compromise what I love about, but I love to draw and weave those things into my own music in an honest and meaningful way. I think that manifests itself in “The Breaking of the Sword,” where the military band evokes a very particular feeling, and I felt that nothing but the military band would do.

You debuted that song on Remembrance Day last year. What was the response to it?

There were people who were surprised that I had created a piece like that. But other people were less surprised because they knew my connection to the Canadian military. I’m an honorary colonel of the Royal Canadian Air Force, which in itself is a surprise to people. I was commissioned to write something for the ceremony a year ago, which was at Vimy Ridge in France and commemorates a World War I battle. In the end, the producers decided they wanted me to sing something from [McKennitt’s 1997 album] The Book of Secrets. I was already writing this song, and I thought to myself, if I don’t put it on the recording, it too will become a lost soul. There was a lot of discussion and debate about whether or not it should go on Lost Souls, because it’s not the kind of piece I would have thought to create without being commissioned.

It seems to echo a theme of impossible longing, in particular with this mother wishing for the return of her dead son. It seems like a story that keeps happening and continues to have meaning across every culture.

I think that speaks to what I’m striving for: to come at the concept of lost souls from different directions. “The Breaking of the Sword” is a snapshot of an experience that I think most people who have had someone perish in a military exercise will relate to. I wanted to take great pains not to get trapped in the winning side or the losing side or the right side or the wrong side. Rather, I wanted the song to sit in the simple zone of a family losing a loved one. On one level, it’s about a mother losing a son. But there’s another layer, one that many people may not realize: The military is another kind of family, and it’s a powerful bond amongst those who serve. I’m reminded of that each year when I go down to the cenotaph each year.

I like to think that sense of loss is something that is timeless and universal, which means we shouldn’t get trapped by questions like, “Is it in support of the military? Or is it not?” All of that is another conversation, a very important one for sure, but this was just simply about losing someone who believes they are fighting for the betterment of humanity. It’s about the simplicity of losing someone who defends what they believe in.