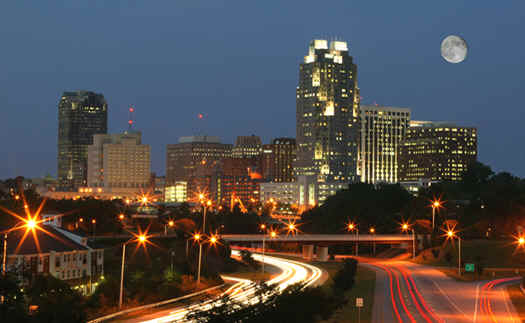 That’s the message being sent out by the International Bluegrass Music Association and from my hometown of Raleigh, North Carolina.

After checking out a number of different locations, the IBMA announced this May that its annual World of Bluegrass event would land in Raleigh for the years 2013, 2014 and 2015. It will stay in Nashville again this year and previously was in Owensboro and Louisville, Ky.

There are plenty of good reasons. (I promise I will get to a few drawbacks here in a minute…) One major plus consists of a new downtown convention center, an outdoor amphitheater across the street and a walking-distance complex of three performance halls.

Also, not only Raleigh but also the neighboring towns of Chapel Hill, Durham and Cary have thriving bluegrass, acoustic and old-timey music scenes. That means there will be ready-made audiences for the public parts of the event.

We don’t (yet) have an Allison Krauss or a Del McCoury living here, but the immediate area is home to folks such as picker-dealers Jim Mills and Tony Williamson; bands such as Russell Johnson and Grass Cats and Carolina Road; record company founders such as Barry Poss and Dave Evans; old-timey legends such as Alice Gerrard and the Red Clay Ramblers; and new standard-bearers such as the Steep Canyon Rangers. Thrown in the burgeoning jam-grass field symbolized by Charlotte’s Avett Brothers and you’ve a little world of bluegrass right around home.

Maybe just as significantly, the Triangle (consisting of Raleigh, Durham and Chapel Hill) can also claim a rich history involving the dawning years of bluegrass. It was while appearing on local powerhouse radio station WPTF that brothers Bill and Charlie Monroe built a huge audience in the Carolinas and made their first recordings for Victor. Of course, they also broke up their partnership in Raleigh, but how else was Bill going to start the original Blue Grass Boys?

WPTF was also home to Lester Flatt and Earl Scruggs in 1952, when the Foggy Mountain boys took up residence in Raleigh at least long enough for Earl’s son Randy to be born here. Generations of hillbilly music fans kept their radios locked in to 680 AM to hear the Stanley Brothers, Jim Eanes, Mac Wiseman, Clyde Moody, Kitty Wells, Johnny and Jack, Chet Atkins and countless others who did stints at WPTF.

“In terms of the history, I think North Carolina is every bit as much the birthplace of bluegrass as Kentucky,’ mandolinist Williamson told me during an interview for the local paper newspaper, The News & Observer.

Moving into the 1960s, the beginnings of the newgrass movement found an early welcome in the Triangle, with the homegrown New Deal String Band and frequent visitors New Grass Revival building a fan base for their rock-influenced sound and long-haired look among the area’s tens of thousands of college students. Through the decades bluegrass, has kept a strong hold on listeners in North Carolina, from small-scale picking sessions to major festivals such as North Wilkesboro’s Merlefest.

And those drawbacks? Raleigh often shows up on national best-of lists in categories such as business environment, percentage of college graduates, low crime and livability. It’s a great place to raise children in and … local voices tend to trail off before muttering the b-word: ‘Boring.’

At one point, true enough. Until quite recently, a big night in downtown Raleigh might consist of trying to get into one of the few restaurants that stayed open after business people headed home to the suburbs, then maybe locating one of the few clubs that featured live music. And there’s the city’s symbol of a giant acorn in a city park, eh? Not perhaps the most riveting trademark: ‘The City of Oaks, where you can watch trees grow.’
But in the last few years, a new public and private emphasis on downtown has brought thousands of new residents and plenty of good restaurants to the area that includes the convention center and walking distance thereof. There are also a number of of live-music spaces expected to feature live bluegrass during the IBMA event.

It should be noticeably less expensive to be in Raleigh than in Nashville for several days. And attendees will be surrounded by locals who are crazy about music of all kinds.
While far from a traditional bluegrass show, folk-pop-rocker Natalie Merchant recently had to pop out from backstage after she had performed for about 90 minutes at the Meymandi Concert Hall, one of the top-level venues near the convention site. A packed house had been standing, cheering, pleading for an encore for close to 10 minutes when Merchant came back out and signaled for quiet.

For more information about the International Bluegrass Music Association, or to register for this year’s World of Bluegrass conference, visit http://ibma.org/.  For a list of other events to visit while in North Carolina check out www.carolinamusicfests.com