First Aid Kit Find Beauty in the Wreckage of Ruins 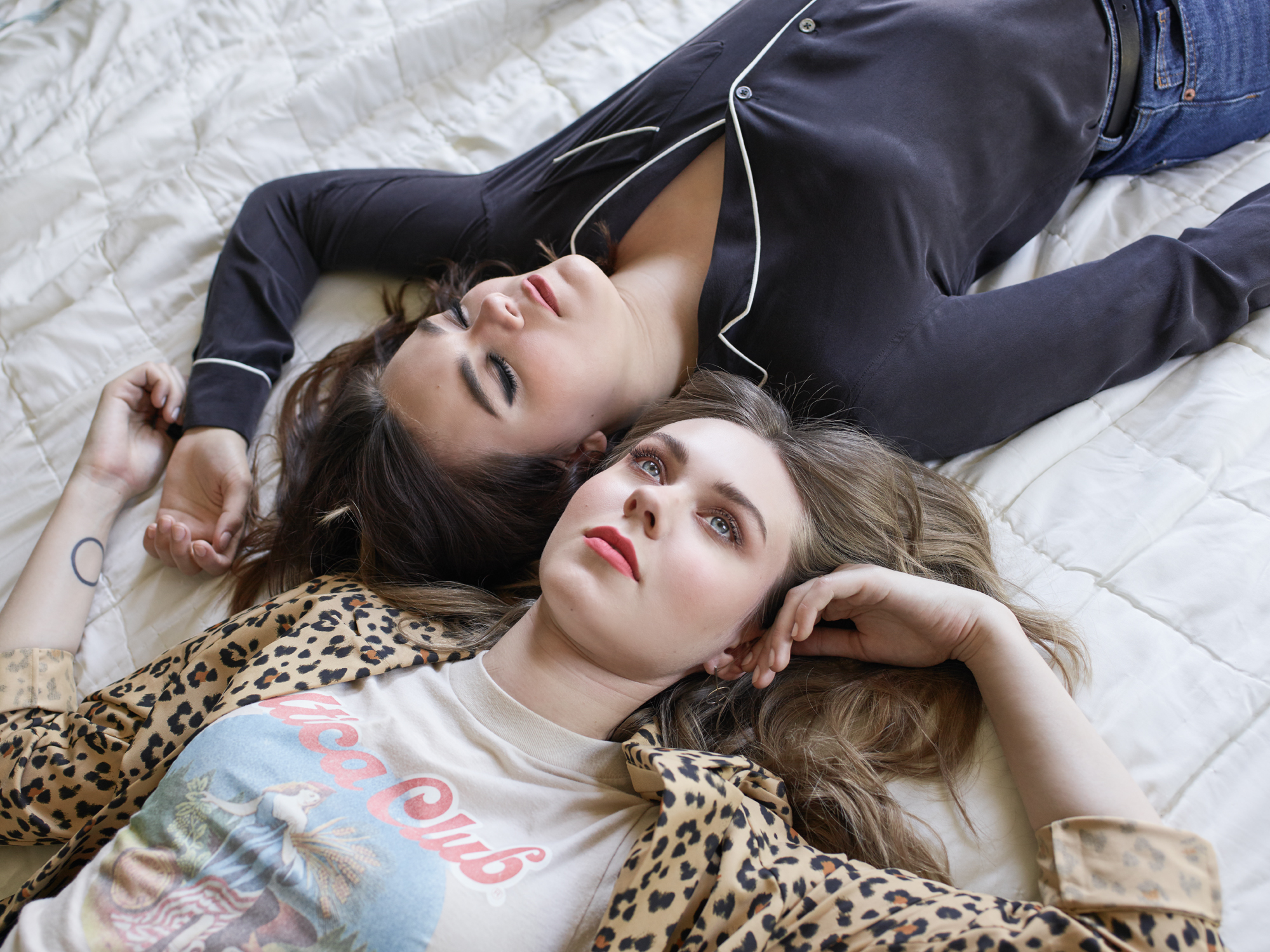 Let it be known that no pint glasses were shattered during the recording of “Hem of Her Dress,” the raucous sing-along and penultimate track on First Aid Kit’s new album, Ruins. It only sounds like there should be peals of clumsy laughter following the crash of a drink hitting the floor at the end of a rowdy night out on the final cut, and that’s exactly what Klara and Johanna Söderberg were going for when they wrote it.

“We were so drunk!” “No, we weren’t — but it sounds like it!” The sisters exchange conspiratorial chuckles when they look back on the “Hem of Her Dress” session, which had Klara serving as a conductor for the family and friends they’d assembled at producer Tucker Martine’s Portland, Oregon, studio. “I got into it,” Klara stresses, recalling how her dad, mom, and little brother — along with producer Martine and his wife, folk singer Laura Veirs — lent rounds of slurred la laaa la laaa la las to the song. (Thanks to her raspy “HERE WE GO!” before they dive in, her claim checks out.) “Dad’s played the bass on every record that we’ve done, and then our mom and Irik, they clapped and did percussion stuff on the last record. It’s nice to have a moment where they can join in.”

“Everyone in Portland was there!” Johanna adds. “Klara was kind of the choir leader. She was orchestrating everyone, mixing everyone … We decided before we were recording it that we were going to have a choir. It’s sort of inspired by Neutral Milk Hotel’s In the Aeroplane Over the Sea. It’s really lo-fi, and it has this rawness to it that we really liked.”

This attraction to rawness is part of what separates Ruins from the rest of First Aid Kit’s catalog, a 10-year swath of stunning harmonies and neo-folk that includes 2012’s debut studio album, The Lion’s Roar, and 2014’s Stay Gold. But what separates “Hem of Her Dress” from the rest of Ruins is rawness of a different ilk: It’s a happy release in an unrestrained capacity, and a welcome one, too, as it follows some of the most painful and cathartic verses Klara has ever written.

Thanks to the success of The Lion’s Roar and Stay Gold — and the relentless touring in support of both albums that had them living out of suitcases for years — the Söderberg sisters found themselves far from their hometown of Stockholm, Sweden, more often than not. Klara decamped to Manchester, England, to live with her then-fiancé when the shows in support of Stay Gold eventually dissipated. But, by the time she and Johanna reunited in Stockholm and started piecing together ideas for what would eventually shape up to be Ruins, Klara’s engagement had ended and left her reckoning with the relationship in her work. This posed a new creative and emotional challenge for Klara and Johanna, as sisters and collaborators: When your sister is devastated and putting deeply personal thoughts to paper, what do you do to help — especially when you know she needs to sing through it in order to heal?

“I think it was different than previous albums, because Klara and I were just in very different places in life, and I think that was a challenge for Klara to sort of let me in,” says Johanna. “We always share, Klara and I; we’re in a family where you don’t have a lot of secrets. If you have an issue, the way to deal with it is to talk through it. Still, songwriting, I think, is more personal and more sensitive than talking. I think that it was, in a way, quite scary for Klara to share it and to let me in and let me have opinions about the songs. I had to respect that. Just because I wouldn’t go through the same things, although I can totally relate to it, I had to step back a little bit more than usual. I mean, yeah, Klara, she’s a wise lady! You can hear it on the album, her perspective and mindset, and I think it’s fascinating.”

“The way we’ve collaborated throughout the years is, I’ve started writing songs, and then we’ve finished a lot of them together, or Joanna had input on different kinds of melodies or ideas I have, stuff like that,” she says. “For me, that’s incredibly helpful because, while I’m a creative person and I write a lot, I don’t finish a lot of stuff. So when I was starting to write, I was just writing for myself, really, and then it felt completely natural to share it. Joanna knew what I was going through. I didn’t have any secrets about that, but it was really hard. Of course, it was helpful, and I felt a lot of support, working through it and writing about it certainly helped me and gave me perspective on things.”

Ruins is rife with tributaries that spring forth from the deepest fissures of Klara’s broken heart. They flow with stark introspection and inconvenient revelations, and Klara doesn’t spare herself when looking in the rearview. The album’s opener, “Rebel Heart,” has her staring down a tendency to favor momentum at the expense of her relationship: “I don’t know what it is that makes me run, that makes me want to shatter everything that I’ve done.”

Klara and Johanna sing of frustration and longing throughout the album, but cut to the chase on “Distant Star” with lines like, “Well, a goodbye never seems finished, just like these songs that I write.” Growth is gradual and doesn’t need a deadline or permission in order to begin, and Ruins acknowledges that closure isn’t necessarily required in order for lost love to mean something. If rawness is the goal, accepting anything less than the stripped-down, naked truth is a part of achieving that, no matter how painful it is to confront it.

“There’s a lot of uncertainty, a lot of asking why,” says Klara. “I don’t necessarily think you ever have the answers to those questions, and maybe that’s okay. Our hope is that people who are going through this or have gone through it, they hear it, and feel that we’ve all been there. To me, that’s always been so helpful in my life.”

Even “Hem of Her Dress,” palpable joy and the voices of loved ones in stride, reiterates this: “I learned some things never heal with time.”