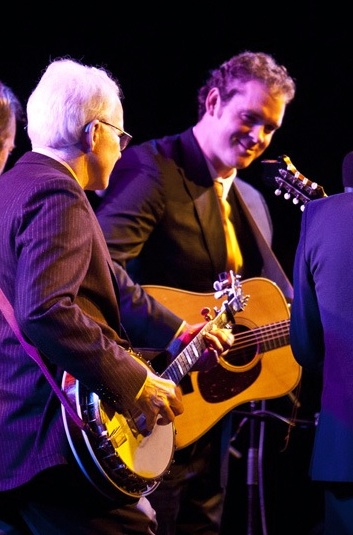 WOODY PLATT‘s music is something of a dichotomy.    The sound of his band, The Steep Canyon Rangers, is tight and traditional bluegrass, while their lyrics belie much more contemporary topics (for an example of this, check out their tune with Steve Martin, Atheists Don’t Have No Songs).  Woody and the rest of the Steeps take to the stage with Steve this Saturday, September 1 at the Pantages Theatre in Hollywood, and the band is also hosting the upcoming bluegrass cruise, Mountain Song At Sea in February (The Sitch will be there too!).  Before their Southern California arrival, Woody filled us in on the top five songs he’s listening to right now for this month’s MIXTAPE.

‘Blaze has a very warm yet rugged delivery in his voice and a great finger picking guitar style that accompanies this delivery. I heard this live recording several years back and it has been one of my favorites ever since.’

‘This album was my first introduction to Doc and one that helped lead me to becoming a guitar player/singer. Several of the songs on this album were the first that i tried to sing in a bluegrass style. With the very sad loss of Doc this year—i have gone back to enjoy this album. ‘I hope Docs guitar is laying right by his side.’

‘This is a duet collaboration of cover songs by Shannon and Barrett-who are from western NC.  It is a new project and features beautiful vocals and tasteful guitar. On Corcovado Shannon sings with a classic sultry style and Barrett sings in smooth convincing Portuguese. This is a breathtaking version of the jazz standard.’

‘I love the Del McCoury band. They have been such great ambassadors for Bluegrass music and have influenced some many artists including me. Eli Renfro is a haunting song that features both Dels high tenor range and his deeper lead range. The melody is contagious.’

‘The Viceroys are a lesser know reggae group who recorded in the late 60’s through the early 80’s and although they are not too well known—they made some great recordings and had some major success in Jamaica.  I love roots style reggae and this recoding is just right.  It feels good and has a great groove.’