Fort Worth African American Roots Music Festival Is About Community 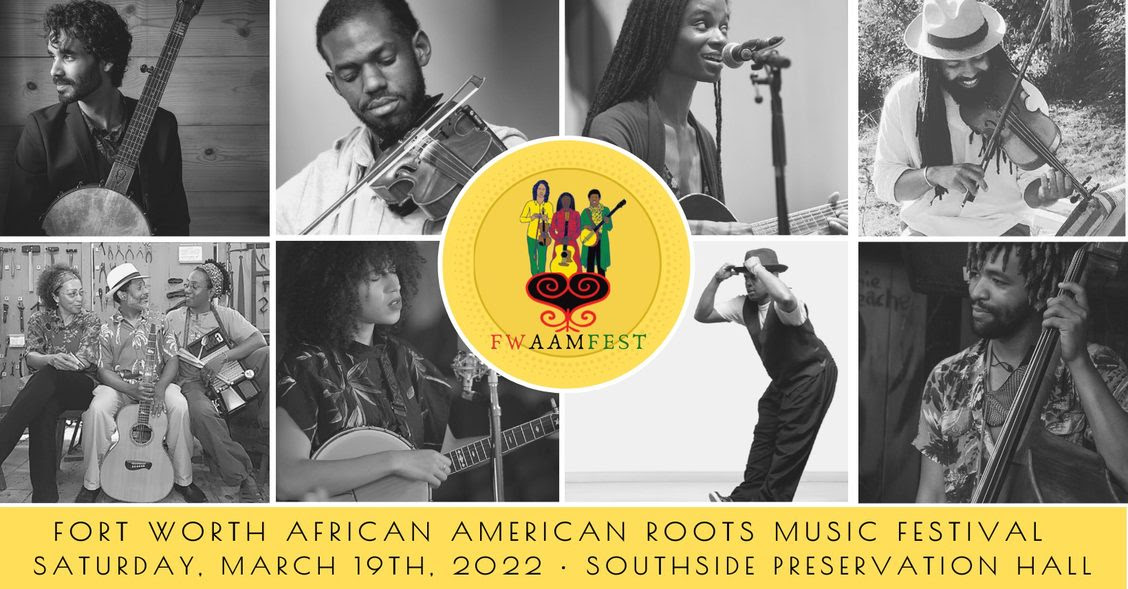 To put it simply, the Fort Worth African American Roots Music Festival is expanding awareness about the Black roots of old-time music. It’s also about representation, visibility, and perhaps most of all, community.

“We have been there since the beginning of this music, yet there is little to no representation in the large music festivals that cater to this genre,” says founder Brandi Waller-Pace. “We aim to change that.”

Leading up to FWAAMFest, Brandi Waller-Pace shares how a sense of community shaped this one-of-a-kind event.

BGS: What led to the idea of launching a festival focused on African American roots music?

Brandi Waller-Pace: I started playing old-time music myself by finding the banjo not terribly long ago. Maybe five years ago is when I really turned my attention toward the instrument and began to play, and really quickly connected with one of the few people in my community who plays clawhammer. He convinced me to sing and play guitar in a string band with him and another member. So, I got my chops up and learned a lot and gradually learned a lot about the history.

Finding out how deeply embedded Blackness and Black history – the history of my own ancestors – was, in the case of the banjo and the tradition surrounding the music, felt really affirming to me. Before long I began to meet other Black folks who were deeply involved in the community and the history. We started to connect, and those circles grew.

I remember hearing about the Black Banjo Gathering before I had gotten into the music at all, and not really knowing its significance until later. And then I attended another event that Dr. Dena Jennings, at her farm in Orange, Virginia, called the Affrolachian On-Time Music Gathering — or “The Thang.” It was really the first time I was around a significant amount of Black folks who were engaged in roots music, talking about the history and just engaging with one another.

It wasn’t an exclusively Black event, but it was really the first time I was around a significant amount of Black folks who were engaged in roots music, talking about the history and just engaging with one another. It was really beautiful. It planted a seed, I think. As I engaged more in the community, there were discussions about “How do we work on inclusion in existing spaces? When is it time to create new spaces?” I considered, “You know, I could create something new.” I tend to operate that way. I’ll engage in existing spaces and systems but I love the idea of creating something new. And so I said, “I could do a festival.”

You cover multiple old-time music styles at this festival. How did you curate the lineup?

I have to be honest. I’ve just been really fortunate to know so many wonderful musicians, and to become acquainted with some, and to develop deep friendships with others. And so, the lineup came from asking, “What’s the community that I’m finding myself in? And who are the people that I know about that I don’t get to see as often but are amazing musicians?” As this event grows, I hope to engage with people further and further from my close circle while still making sure to have space for those that were so important to starting my journey into this music and learning the history of it.

A festival like this will bring visibility to the Black roots of old-time music. Why is that important to you?

In part, the visibility is connected to my own journey of discovery and finding myself, and what my Blackness means to me. The Black roots of old-time music are such a huge part of US culture. Enslaved Africans materially and economically and physically and culturally built so much of what we define as US culture.

In my work in music education, and in my scholarly work, and in my clinician work, that is what is so important to me – centering narratives that are so very important but are not broadly treated as such. It makes me happy to think of the idea of Black folks on a broader scale looking at these musical forms and seeing Black identity within that and having that engagement. It brings it back full circle to times when these traditions were seen as common in Black spaces.

What is the mission behind your nonprofit, Decolonizing the Music Room?

The mission of Decolonizing the Music Room is to center Black, Brown, Indigenous, and Asian voices, knowledge, and experiences in music education and related fields. So, we do this with things like FWAAMFest or with presenting to educators and other organizations, or by creating content that puts these narratives out there. We’re engaging with music education and other communities across disciplines to really connect to others and get this work out there as much as possible.

It’s a lot of work to launch a festival, but what have you enjoyed the most about creating this event?

You’re right, it is an immense amount of work to launch a festival, but what has brought me the most joy is doing it with friends. These are not just people I admire, experts in their field, genius performers, scholars, and community activists. They are actual people I know in real life and I still want to pinch myself when I think about the fact that this is actually happening with these people, because I feel like so much of a newbie. Being able to do this has been really amazing.

The second thing has been that it’s been in my community. I taught in public schools here. I taught music, wrote curriculum, and engaged in community advocacy work. I’ve been down here for 13 years now. I feel like I have roots here. I have children who go to school here. I have colleagues that I’ve worked with. I’m an artist in the community. For me personally, I wanted it to be something that feeds diversity into the community where I live, where I’ve taught, and where I’m raising my children. It’s wonderful to be able to do that.

For those music fans coming to check it out, what do you hope will take away from the experience?

I want people to come and understand that this music is Black music. Blackness is all throughout. This music is community music. This music is music that can bring people together, and that one can engage in. One of the things that I love most about learning old-time music is that there’s so much nuance and there are complicated things that you can learn, but also the level of accessibility. It didn’t take me long to be able to engage in a way that felt meaningful for me, even though the way I can play now is light years from the way I could play when I just started.

Seeing all that Blackness represented and understanding the connection. Seeing that it can be participatory and then knowing something like that is in Fort Worth. They’re gonna take away, “I gotta come back to Fort Worth every March because I have to be in this festival.” The folks in the community are gonna say, “You know what? Maybe I want to learn the banjo.” That is something I can do here. We can create more musical community here.