Frank Solivan Finds Room for All Kinds of Bluegrass 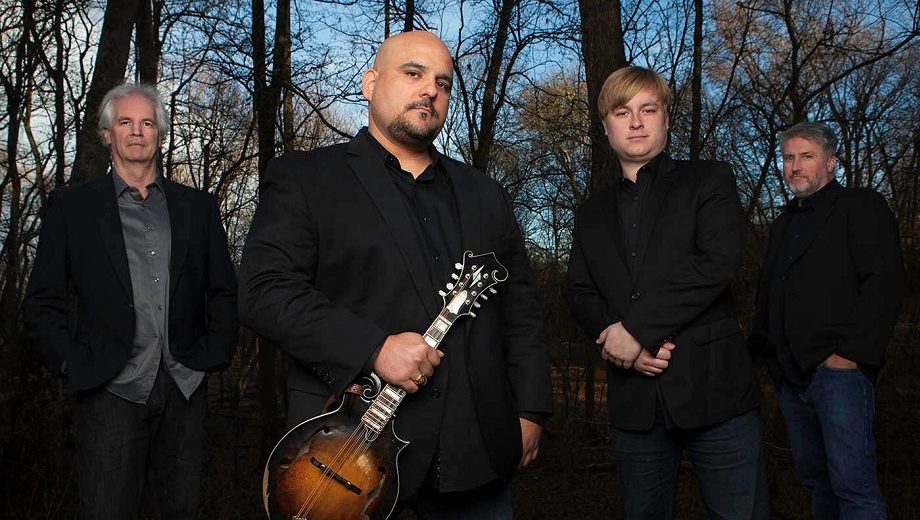 Frank Solivan has steadily built a foundation in bluegrass, from going to festivals as a kid, touring in acoustic bands while living in Alaska, and playing fiddle in the US Navy Band’s bluegrass ensemble. For nearly 10 years he’s fronted Frank Solivan & Dirty Kitchen, an IBMA award-winning group that embraces its eclectic influences. A few days before releasing the new album, If You Can’t Stand the Heat, Solivan traced his journey with the Bluegrass Situation.

BGS: Let’s start with “Crave.” I feel like it captures everything that you’re about – the melody, the picking, and the big singing voice. Did you think it sets the tone for this new album?

Solivan: Yeah, a little bit. Right from the beginning, I had an idea for long, sustaining notes, and this chordal thing, and the words started coming together. Becky Buller and I started writing that song… gosh, it’s been a while now. We took some artistic arrangement liberties in the studio and came up with what’s there. I almost feel like I painted myself in a corner because it is a tough song to sing, and it takes a lot of vocal energy, that’s for sure.

You do build up to a big note. While you’re singing that song, do you think, “Oh no, here it comes…”

You know, if I’m in good voice, I’m not terribly worried about it. There’s a lot of arrangement stuff that goes on in there too, keeping it together. Singing well while you’re playing an arrangement like that – I’m really the only person I have to worry about. Everybody else is great. It’s fun, though, and it’s a challenge.

I was having some trouble with my hands over the last decade or so, my left hand especially, and it was getting progressively worse up until we were recording this record. I never considered myself a great singer or whatever, but I really wanted to focus on the singing on this record, because I thought maybe I won’t be able to play as well as I want to later.

Then I had carpal tunnel release surgery on my hand and it turned out great. I went to a top-class surgeon and my hand is fine now. But, you know, as a musician you worry about that, thinking maybe I should just focus on singing well on this record and keep my playing within my limitations, and not reach out too far. I was able to focus and find a singing voice. I’m constantly trying to become a better singer and I think maybe this record helped with that a little bit, too.

On your albums, you often go for honest, confessional lyrics, and I don’t hear that a lot in bluegrass. Do you think you have that more “sensitive songwriter” side to your music?

Oh, I’m just a big teddy bear. [Laughs] My songwriting comes from inspiration in life, for sure. But I didn’t write every song on this record. I wrote “Crave” with Becky, then there’s a song that closes the record called “Be Sure” that was based on an experience of mine, and some other experiences of others around me at the time, when I was 19 or 20 years old. And it’s finally seeing the light of day and got recorded.

But the formula is having songs that I can relate to – either songs that I’ve written or written with somebody, or from a family member or a band member. My cousin Megan McCormick wrote two songs on there – “My Own Way” and “Shiver.” Our banjo player Mike Munford composed the banjo tune on there. Also, friends write songs, like Sarah Siskind. She wrote the song “Set in Stone” with Ari Hest. That’s the formula for us — keeping it kind of close.

How did you wind up living in Washington DC?

Back when I was 18, I graduated from high school and moved from Central Valley, California, to Alaska. I drove my pickup truck up there. I was with my mom, and also I was invited to play music up there with Ginger Boatwright. She was doing a tour that first summer with Doug Dillard – she was the singer and guitar player for the Doug Dillard Band. I thought, “OK, I’m going to hang out and play it by ear.” We had a little bit of family up there, so we stayed with them. My mom got a job and then I went off and moved all around Alaska.

Long story short is, I loved it and stayed. I worked all kinds of jobs, from explosives, to a perforating service, to driving trucks and delivery vehicles, to driving a school bus and being a substitute school teacher, to construction… whatever I could do that would allow me to go hunting and fishing and play music. I played with a lot of bands and went to the University of Alaska in Anchorage and studied violin performance. And then heard of an audition for the US Navy Band in Washington DC, for the country band and bluegrass band, and when they had an opening, they offered me the job.

The next thing you know I’m going to boot camp, doing about a million push-ups. Anyway, Leah — who is my wife now but was my girlfriend at the time — and I moved to the DC area in 2003 and I reported for duty. We got locked in here and I did six years with the Navy Band. I decided at the five-year mark that I needed to get out and I gave them my notice. I needed to get out and make music. It was a good job and I was proud to serve, but for me, I needed to be an artist. I needed to make music, not just play music.

Growing up, who were some of the people who encouraged you?

Well, we’d have these huge family gatherings and we’d end up doing big meals, and the next thing you know, everybody’s pulling out instruments and everybody’s encouraging other. I had a cousin Ty that passed away last year — Charles Tyson Smith – and I’ve recorded a number of songs that either he’s written or that we wrote together. He was somebody I looked up to in my family as a musician, writer, and singer.

And of course my parents would take me to concerts and music festivals. I remember when I was pretty young, going to see Ray Charles, Tower of Power, Stevie Wonder, The Judds, Merle Haggard, whoever it might be. I had all these opportunities to see these greats and we’d go to music festivals as well – bluegrass festivals and old-time fiddle contests and jam sessions. That’s what I grew up doing. Now of course I realize what a gift it was.

When I was in high school, I heard about this band who was looking for a fiddle player. My mom took me to the audition and I got the job. She took me to a number of these gigs and helped me buy the gear I needed for it. I played with a number of bands in high school, but they weren’t high school bands. They were regional bands that would open up for big names and big concerts, and play big clubs and dancehalls. Luckily I carried myself a little older than I was, which was great, because if they knew I was 16, 17, or 18 years old, I probably wouldn’t have been allowed to go into these places!

Being exposed to so many different kinds of music, do you think that shaped the way you hear songs or seek out songs?

Yeah, I think it’s a more open-minded approach for sure. People are always trying to categorize — “So, what kind of music do you play?” A graphic artist friend of mine and I came up with a shirt design, and we sold out of ‘em pretty quick, but it was basically an umbrella, and on the umbrella, it said, “ALLGRASS, Frank Solivan & Dirty Kitchen.” Then underneath it, like raining coming down inside the umbrella, it had words like Appalachian, mashgrass, newgrass, bluegrass, country, acoustic, and all these different titles people think you need to categorize somebody. But the idea was, we try to pull from all of those things and beyond. But also to say, all of those styles are, shall we say, bluegrass.

I think people are really scared these days about losing traditional bluegrass music. But it’s kind of like everything – if it’s really good, which it is, and authentic and organic and beautiful and done well, then it’s not going anywhere. It will stand the test of time. And the beauty about all those traditional bluegrass people like Bill Monroe, or moving on into the Osborne Brothers and Jim & Jesse, all those guys were innovating. They were trying to get it to a larger audience, and to me, that’s the tradition of bluegrass – to constantly have it evolve for people right now.